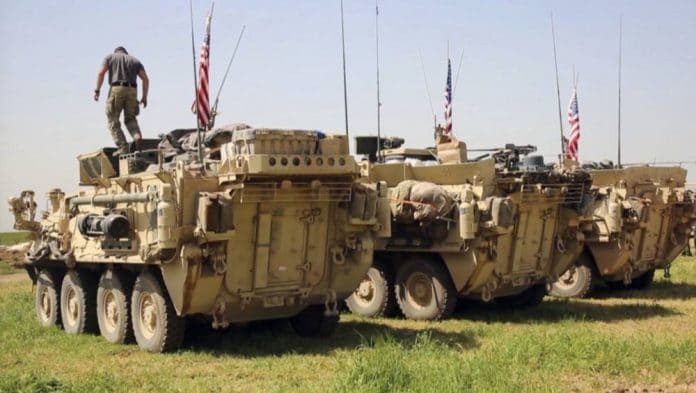 What we can expect from this, and this is not a guess, is a new gas attack inside Syria, something the Saudi’s can jump on.  We see the hand of the Jigsaw “phony Soros” regime change machine, formerly Google Ideas Group, behind a new plot to push for Trump air strikes against Syria and a war with Russia on behalf of Israel and Saudi Arabia, who are “Google.” … Gordon ]

Abdulaziz Yunus, who is in charge of foreign affairs of the Syrian Democratic Forces (SDF), has revealed to Sputnik that the US and the coalition continue have never stopped arms supplies, despite earlier reports that President Trump promised President Erdogan to put an end to deliveries to the Syrian Kurds.

“The US and its coalition continue providing their military aid. Any reports that the US has halted its arms’ supplies are wrong and do not reflect the situation on the ground,” Abdulaziz Yunus told Sputnik Turkiye.

He further specified that, only a day before, Washington had sent “hundreds of trucks loaded with weaponry,” all of which have been brought from Qamishli, a city in northeastern Syria on the border with Turkey, to the districts of Deir ez-Zor, where the SDF is currently launching a military operation against Daesh.

This Saturday, April. 29, 2017 still taken from video, shows an American soldier standing on an armored vehicle in the northern village of Darbasiyah, Syria. U.S

“At the moment, the US has not made any announcement that they intend to stop sending arms. On the contrary, they have voiced their intention to facilitate the cooperation with us and increase the volume of their aid to the SDF. This is their current strategy. We, in turn, also hope this support will continue,” the SDF foreign affairs official told Sputnik.

On Friday, US President Donald Trump promised his Turkish President Recep Tayyip Erdogan that the Pentagon would stop arming the Syrian Kurds, who form the backbone of the SDF.

READ MORE: Turkish Official: US to Deceive World Unless They Stop Arms Supplies to YPG

After the two presidents spoke, Foreign Minister Mevlut Cavusoglu, who was present on the call, told reporters that Donald Trump said the United States would no longer supply arms to the YPG (People’s Protection Units)-led Syrian Democratic Forces, six months after it announced it was sending them heavy weapons.

“He clearly said that this nonsense should have been ended sooner,” Cavusoglu then stated, as quoted by the US-based Al-Monitor website, which reports on Middle Eastern affairs.

Ankara has repeatedly claimed that the YPG is an affiliate of the Kurdistan Workers’ Party (PKK) which is listed as a terrorist organization in Turkey for its three-decade-long armed campaign against the Turkish state.

In September, the US-backed Syrian Democratic Forces (SDF) received 200 trucks loaded with ammunition and weapons from the US, according to Syrian opposition sources.

The Syrian opposition source revealed that on September 11, 100 trucks carrying weapons and ammunition entered the SDF-held area in al-Hasakah governorate. The trucks entered Syria coming for the Kurdistan Region of Iraq via the Semalka border crossing on the Syrian-Iraqi border.

On September 19, 100 more trucks entered Syria via the same border crossing, according to the source. The second batch was sent to the SDF-held area in Deir Ezzor governorate on September 20, according to Kurdish sources.

The trucks carried several US-made Oshkosh L-ATV vehicles, dozens of pickups, different types of weapons and ammunitions, according to Syrian opposition sources. Some trucks also carried fuel and other supplies likely for the US bases in Syria.

Since June, the US has supplied the SDF with over 1,600 trucks with weapons and ammunition to support its operation in Raqqa city. The latest shipment is likely a part of the US effort to boost the SDF advance in Deir Ezzor governorate in order to capture the strategic oil fields in the eastern Deir Ezzor countryside before the Syrian Arab Army (SAA) and its allies reach them.