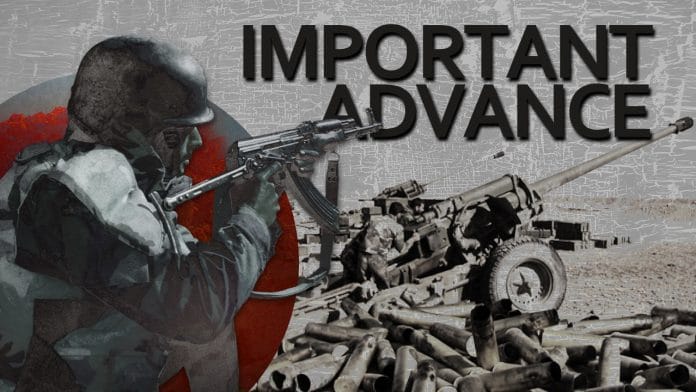 The ISIS-held pocket on the western bank of the Euphrates River is close to a full collapse as the Syrian Arab Army (SAA) and the Tiger Forces are advancing on the last ISIS-held points there.

On November 27 and 28, fierce clashes were ongoing in the areas of Asharah and Makhan. According to pro-government sources, both towns are now in the hands of the SAA, but ISIS continues to attack them.

Once the attacks are repelled, government forces will focus on liberating the last ISIS-held town in the pocket – Quriyah. Then, the ISIS-held part of the western Euphrates bank between al-Bukamal and Salihiyah will be the main target of the Syrian military.

On November 28, the Syrian Defense Ministry announced that the SAA had liberated Quriyah. However, no photos or videos are available yet.

In the Eastern Ghouta region, near Damascus, sporadic clashes between the SAA and militants continued in the area near the Armoured Vehicles Base. Ahrar al-Sham and its allies have conducted no further attempts to capture the base after the recent failed advance.

Pro-government sources also speculated that the SAA is going to encircle the militant—held part of Jabar district advancing along the M5 highway. However, no major attacks have taken place as yet.

Separately, the SAA liberated the village of Mustarihah from HTS in the nearby area.

The violence in Syria has calmed down slightly after the liberation of key ISIS strongholds in eastern Syria. Now, the Russian-Syrian-Iranian alliance and US-backed forces are focused on clearing the remaining ISIS-held areas there.

According to pro-government experts, HTS will become the obvious target for the military operations of the Russian-Syrian-Iranian alliance after the full defeat of ISIS. However, much will depend on the results of the upcoming Sochi conference on Syria, which will involve Iran, Turkey, Russia, the Syrian government and a notable part of the Syrian opposition.