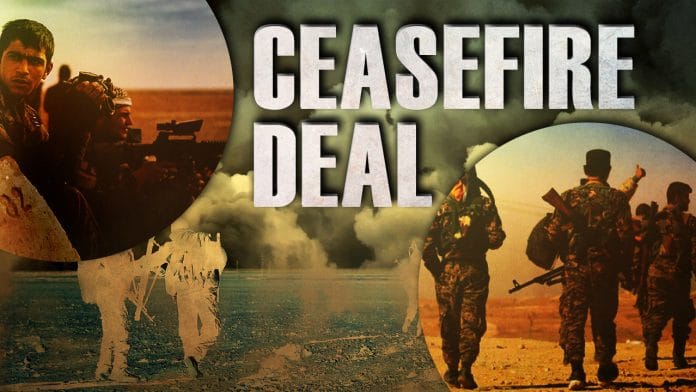 Earlier this week a photo of the alleged ceasefire deal between the US-backed Syrian Democratic forces (SDF) and ISIS appeared online. According to the document, the two sides reached a ceasefire agreement to avoid clashes in eastern Syria, especially in the province of Hasakah. The SDF allegedly agreed to avoid engaging ISIS units, fighting with sides not involved in the agreement – in other words, the Syrian Arab Army (SAA).

Within the framework of the agreement, the sides would establish a hot line and a military coordination room to maintain the ceasefire and to inform each other about military movement close to the contact line. Civilian and economic traffic would also be open between the SDF-held and ISIS-held areas.

On Tuesday, the SDF media wing released an official statement on the issue and claimed that the circulating document was fake adding that this is a part of the propaganda campaign against the SDF.

Even if this particular document is fake, the SDF is the main side responsible for the fact that people are ready to believe in such reports. The US-led coalition and the SDF have repeatedly insisted that they make no deals with ISIS. Meanwhile, they made deals with ISIS in the cities of Manbij, Tabqah and Raqqah and allegedly made a deal with ISIS-linked tribes in the area of the Omar oil fields.

In the province of Deir Ezzor, the SAA eliminated the entire ISIS-held pocket south of Mayadin and are now deploying units for an advance to clear the ISIS-held area northwest of al-Bukamal.

In northeastern Hama and southern Aleppo, the SAA has liberated the villages of Abisan, Aziziyah, Ramlah and Rasm Khala and repelled an attack on the village of Rashadiya by Hayat Tahrir al-Sham (formelry Jabhat al-Nusra, the Syrian branch of al-Qaeda). In total, government forces have liberated 17 villages from Hayat Tahrir al-Sham since the start of the advance west of the Ithriyah-Khanasser-Aleppo highway earlier in November.