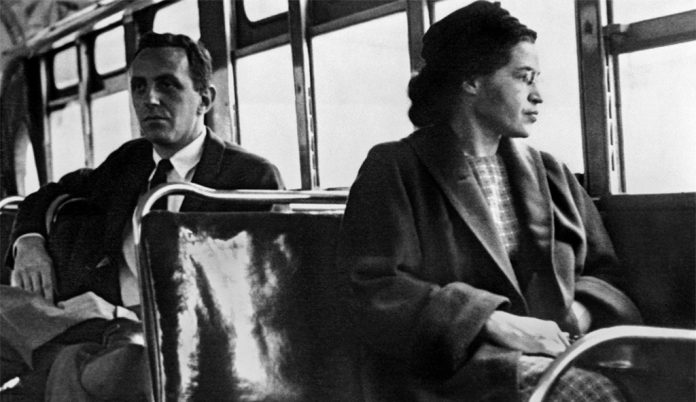 On this 1st day of December in 1955, in Montgomery Alabama, Rosa Parks is jailed for refusing to give up her seat on a public bus to a white man, a violation of the city’s racial segregation laws.

“The mother of the civil rights movement,” as Rosa Parks is known, was born in Tuskegee, Alabama, in 1913. She worked as a seamstress and in 1943 joined the Montgomery chapter of the National Association for the Advancement of Colored People (NAACP).

According to a Montgomery city ordinance in 1955, African Americans were required to sit at the back of public buses and were also obligated to give up those seats to white riders if the front of the bus filled up.

Parks was in the first row of the black section when the white driver demanded that she give up her seat to a white man. Parks’ refusal was spontaneous but was not merely brought on by her tired feet, as is the popular legend.

In fact, local civil rights leaders had been planning a challenge to Montgomery’s racist bus laws for several months, and Parks had been privy to this discussion.

Learning of Parks’ arrest, the NAACP and other African American activists immediately called for a bus boycott to be held by black citizens on Monday, December 5. Word was spread by fliers, and activists formed the Montgomery Improvement Association to organize the protest.

The first day of the bus boycott was a great success, and that night the 26-year-old Rev. Martin Luther King, Jr., told a large crowd gathered at a church, “The great glory of American democracy is the right to protest for right.” King emerged as the leader of the bus boycott and received numerous death threats from opponents of integration. At one point, his home was bombed, but he and his family escaped bodily harm.

The boycott stretched on for more than a year, and participants carpooled or walked miles to work and school when no other means were possible. As African Americans previously constituted 70 percent of the Montgomery bus ridership, the municipal transit system suffered gravely during the boycott.

On November 13, 1956, the U.S. Supreme Court struck down Alabama state and Montgomery city bus segregation laws as being in violation of the equal protection clause of the 14th Amendment to the U.S. Constitution.

On December 20, King issued the following statement: “The year old protest against city buses is officially called off, and the Negro citizens of Montgomery are urged to return to the buses tomorrow morning on a non-segregated basis.” The boycott ended the next day. Rosa Parks was among the first to ride the newly desegregated buses.

Martin Luther King, Jr., and his nonviolent civil rights movement had won its first great victory. There would be many more to come.

Rosa Parks died on October 24, 2005. Three days later the U.S. Senate passed a resolution to honor Parks by allowing her body to lie in honor in the U.S. Capitol Rotunda.