[ Editor’s Note: We have all been expecting a plea from Flynn, but there was no way to know what all it might involve. We still do not know, as this is just one count, and we don’t know if Flynn got this deal by agreeing to work with prosecutors on other issues.

The White House will of course try to tie a bow on the whole ordeal and put it to bed. Flynn has worse problems on his lucrative $530,000 deal with the Turks to help them get Muslim cleric Fethullah Gulen, Erdogan’s number one public enemy, or scapegoat as the case may be.

The Feds had Flynn in a tight spot, as they are targeting his son, also. One of the top investigators Mueller brought in on his team was one who had a strong track record on getting pleas from suspects who had involved family members in their enterprise.

So this begs the question could Trump find himself in the same spot one day for bringing his daughter and son-in-law into the White House? Kushner’s dad was not only convicted for major fraud, but brought two other major fraud ex-convicts he met in prison into the family business when he was released – a classic “birds of a feather hang together” deal.

I would bet that Flynn’s plea will not be the end of the RussiaGate story.

And I say that meaning even the Democrats still have some worries for tagging Russia with their computer hacking scandal when there were multiple suspects, and Hillary chose the one she though she could profit the most from.

Ex-CIA people are accusing the agency of twisting the story to serve its own agenda with Russia, and that is not a minor thing. When foreign agencies try to rig Intel to throw law enforcement off the track, it is considered a national security attack. What is it when domestic Intelligence does the same thing?

Mueller is still very early in his investigation. We will be learning more when he is ready. But at VT, we are still waiting to see if Trump’s Russian Khazarian Mafia ties, his serial sexual abuse, and massive business swindling, most of them criminal conspiracy felonies, will get the attention they deserve… Jim W. Dean ]

President Donald Trump’s former national security adviser, Michael Flynn, has turned himself in to the FBI. He pleaded guilty to charges of making false statements to the FBI about his conversation with the Russian ambassador in December 2016.
–

The charge was detailed in court documents unsealed on Friday. The document accuses Flynn of making “materially false, fictitious, and fraudulent statements” to law enforcement about a phone call he had with former Russian Ambassador to the US, Sergey Kislyak. The statements were made on January 24, four days after Trump was inaugurated.

Flynn, 58, pleaded guilty to the charge during a Friday morning hearing in Washington, DC. 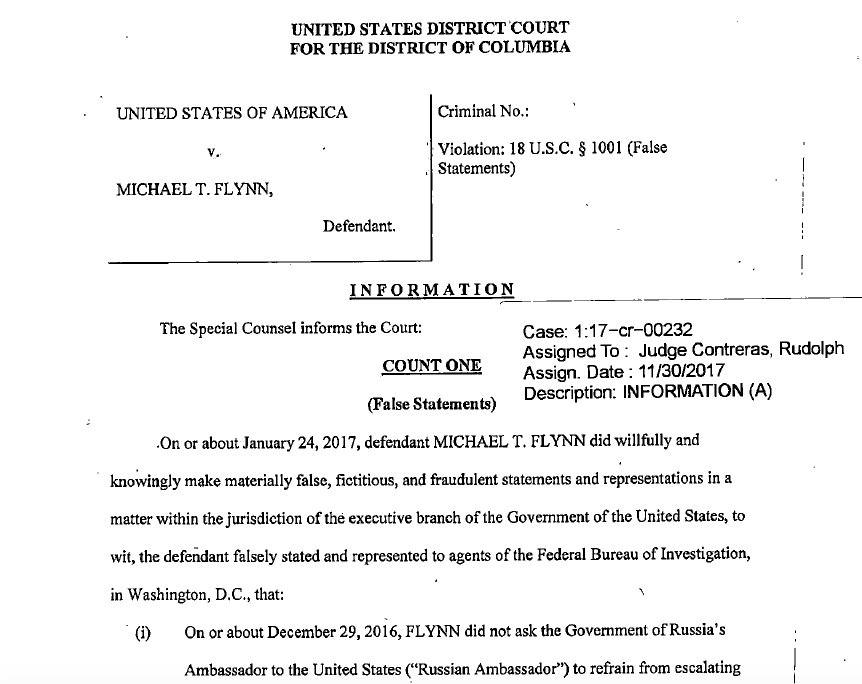 Flynn resigned less than a month into Trump’s term, after the acting Justice Department head – who was subsequently fired for refusing to enforce a travel ban executive order – warned that he could be subjected to blackmail because his dealings with Russians hadn’t been disclosed.

At issue was the phone call between Flynn and Kislyak at the end of December 2016, after President Barack Obama ordered a number of Russian diplomats to leave the US and closed two Russian diplomatic properties.

Flynn is specifically accused of falsely claiming that he did not ask Kislyak to “refrain from escalating the situation in response to sanctions that the United States had imposed against Russia that same day.”

He is also accused of falsely telling agents that he “did not recall the Russian ambassador subsequently telling him that Russia had chosen to moderate its response to those sanctions as a result of his request.”

Flynn also told the FBI that he “did not ask the Russian ambassador to delay the vote on or defeat a pending United Nations Security Council resolution,” according to court documents.

US intelligence services listened in on the phone call. Information about it was leaked to the media in January, after Trump’s inauguration. Flynn resigned in February.

In a statement on Friday, Flynn said he was falsely accused of treason and other outrageous acts, and that he made the decision to cooperate with the special counsel in the best interests of his family and the country.

The plea “clears the way for a prompt and reasonable conclusion” of the special counsel investigation, White House attorney Ty Cobb said on Friday, according to Reuters.

“I inadvertently briefed the Vice President Elect and others with incomplete information regarding my phone calls with the Russian Ambassador. I have sincerely apologized to the President and the Vice President, and they have accepted my apology,” Flynn wrote in his resignation letter.

After he stepped down, Flynn filed an updated foreign registration form which showed that he had not disclosed contacts and payments from foreign entities – specifically, the government of Turkey – while serving as Trump’s campaign adviser from February 2016.