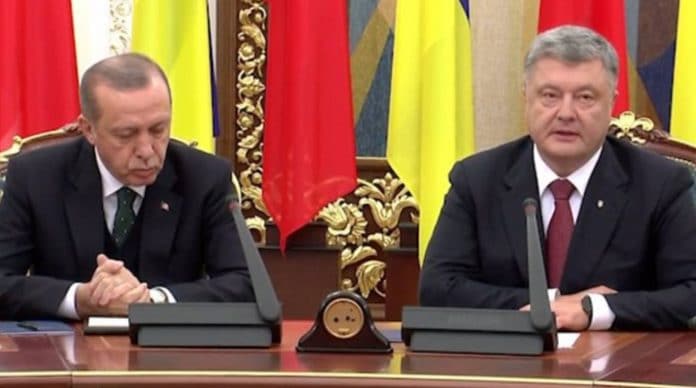 Recently, Pravda newspaper of Russia has reported that the Turkish President Recep Tayyip Erdogan has been suffering from serious sleep deprivation and that he was yawning and dozed off during a press conference with the Ukrainian President Petro Poroshenko while on a state visit to Kiev, and the video of the incident has been going viral over social media.

Though this might appear as a minor diplomatic gaffe but bear in mind that insomnia is a serious psychiatric disorder, cognitive functions of sleep-deprived individuals are severely hampered, and such people are prone to committing rash and reckless acts.

Moreover, readers who have been keenly watching Erdogan’s behavior since the July 2016 coup plot must have noticed in his recent TV appearances that his facial expressions have become quite bland lately, he has been lacking in any warmth even when he is hugging and kissing children for public relations’ photo ops, and he has the look of a madman in his eyes.

In order to substantiate this subjective psychoanalytical evaluation of Erdogan’s attitude and body language with concrete evidence, I would draw the reader’s attention to quite a few rash and impulsive acts committed by the Erdogan administration during the last couple of years.

First, the Turkish air force shot down a Russian Sukhoi Su-24 fighter jet on the border between Syria and Turkey on 24 November 2015 that brought the Turkish and Russian armed forces on the brink of a full-scale confrontation in Syria.

Second, the Russian ambassador to Turkey, Andrei Karlov, was assassinated at an art exhibition in Ankara on the evening of 19 December 2016 by an off-duty Turkish police officer, Mevlut Mert Altintas, who was suspected of being a Muslim fundamentalist.

Third, the Turkish military mounted the seven-month-long Operation Euphrates Shield in northern Syria immediately after the attempted coup plot from August 2016 to March 2017 that brought the Turkish military and its Free Syria Army proxies head-to-head with the Kurdish-led Syrian Democratic Forces and their US bakers.

And fourth, the Turkish military has recently once again invaded Idlib in northwestern Syria on the pretext of enforcing a de-escalation zone between the Syrian militants and the government, despite official protest from the latter that the Turkish armed forces are in violation of Syria’s sovereignty and territorial integrity.

Regarding the July 2016 coup plot, instead of a serious attempt at overthrowing the government, the coup plot actually was a large-scale mutiny within the ranks of the Turkish armed forces. Although Erdogan has scapegoated the Gulenists to settle scores with his one-time ally, but according to credible reports, the coup was in fact attempted by the Kemalist liberals against the Islamist government of Turkey.

For the last several years of the Syrian civil war, the Kemalists had been looking with suspicion at Erdogan administration’s policy of deliberately training and arming Sunni militants against the Shi’a-dominated government of Bashar al-Assad in the training camps located on Turkey’s borders with Syria in collaboration with CIA’s MOM, which is a Turkish acronym for military operations center.

As long as the US was onboard on the policy of nurturing Sunni Arab jihadists in Syria, the hands of Kemalists were tied. But after the US declared a war against one faction of Sunni militants, the Islamic State, in August 2014 and the consequent divergence between Washington’s policy of supporting the Kurds in Syria and the Islamist government of Turkey’s continued support to Sunni militants, it led to discord and adoption of contradictory policies.

And then, the spate of bombings in Turkey claimed by the Islamic State and separatist Kurds during the last couple of years, all of these factors contributed to widespread disaffection among the rank and file of Turkish armed forces, which regard themselves as the custodians of secular traditions and guarantors of peace and stability in Turkey.

The fact that one-third of 220 brigadiers and ten major generals were detained after the coup plot shows the level of frustration shown by the top and mid-ranking officers of the Turkish armed forces against Erdogan’s megalomaniac and self-destructive policies.

More to the point, it bears mentioning that the United States has been conducting air strikes against targets in Syria from the Incirlik airbase in Turkey and around fifty American B-61 hydrogen bombs have also been deployed there.

The safety of those H-bombs became a matter of real concern during the attempted coup plot against the Erdogan administration when the commander of the Incirlik airbase, General Bekir Ercan Van, along with nine other officers were arrested for supporting the coup. The movement in and out of the base was denied, power supply was cut off and the security threat level was raised to the highest state of alert, according to a 17 July 2016 report by Eric Schlosser for the New Yorker.

Anti-nuclear activists around the world have been worried about North Korea’s nuclear crisis. And during Donald Trump’s presidential campaign, the Democrats made a convincing argument to the American electorate that would they trust a US president affiliated with the infamous Alt-Right movement with nuclear codes?

What’s worth noting in the aforementioned report, however, is the fact that some of NATO’s H-bombs deployed in Turkey are to be delivered by the Turkish air force if the contingency arises. And a Muslim Brotherhood’s fanatic who has been suffering from insomnia and is prone to committing reckless and impulsive acts has absolute control over those nukes.

Therefore, in order to preempt the likelihood of a nuclear Armageddon, Washington should either press upon its NATO ally to constitute a medical review board to evaluate Erdogan’s psychiatric condition whether he is eligible to serve as president or not, or the US should recall those nukes and deploy them in a safer country like Germany, Italy, Belgium or Netherlands which already hosts dozens of similar NATO’s nukes on its territory, according to a report by the Turkish parliament.

[1] Pravda: Erdogan’s lack of sleep becomes a very serious problem to many:

[2] The H-bombs in Turkey by Eric Schlosser: