I don’t issue false flag alerts very often. But when Donald Trump officially declares that Jerusalem belongs to Antichrist ON THE EVE OF PEARL HARBOR DAY, obviously all of the warning lights are blinking bright red.

Yes, the “Jewish State” of Israel is the Antichrist of the Bible and Dajjal of the Qur’an. How more obvious could it possibly be? Rabbinical Talmudic Jerusalem, the official religion of Israel, holds that Jesus was a bastard and his mother a whore. The Talmud says Jesus is burning eternally in excrement. How much more “anti” to Christ could it possibly get?

This is the official ideology of the Zionist Entity, supposedly representing the world’s fewer than 20 million Jews, that purports to rule the Holy Land of nearly 5 billion Christians and Muslims. Why should a bizarre Christ-hating cult representing fewer than one in 200 Abrahamic monotheists have a monopoly on the Holy Places? Because they are fake Jews and real Satanists, the proverbial Synagogue of Satan, and they will take whatever they can get—the more lies and the more murder it takes to get it, the better.

And the Zionists take it one step further. Unlike the Rabbinical Talmudic Jews (who, as much as they loathe Jesus, at least try to worship “G-d” or a tribal facsimile thereof) the Zionists hate God and are officially in satanic rebellion against Him/Her/It. Their entire ideology is based on invading the Holy Land, perpetrating abominations, and spilling vast amounts of blood, all in service to Satan and in defiance of “G-d” — who explicitly forbade Jews from ever doing such a thing. (For the details, consult the real Jews; that would be Naturei Karta.)

Zionism’s real founder is not Theodor Herzl. It is Shabtai Tsvi, the satanic false messiah. Read up on him, but don’t do it on a full stomach or you may lose your lunch.

The orchestrated human sacrifice of almost 3,000 souls on 9/11, and the subsequent sacrifice of roughly 32 million Muslims in the 9/11 wars, were Satanic-Zionist religious rites. Are we approaching a moment of even bloodier sacrifice?

I repeat, Trump just handed over the Holy City to Antichrist on the Eve of Pearl Harbor Day. Defenders of the Holy Places are rising up all over the world, burning the diabolical images of Trump and the “American” flag that Trump just wiped his ass with when he turned American foreign policy over to Satanyahu. As the chaos spreads, conditions are ripe for a false flag provocation to justify the coming tidal wave of blood.

Will the next world war begin in the Middle East? Quite possibly. Satanyahu wants war on Iran. But he knows he would lose big time unless he can drag the USA into it. Even then, the odds are not very favorable, as The Atlantic discovered when they sponsored a simulation.

Another possibility is that the big feint in Jerusalem is misdirection – the Next Pearl Harbor could involve Korea. A huge war in Korea would take the world’s mind off of Antichrist’s theft of Jerusalem.

Antichrist’s neocon spokesdemons have just called for criminal war of aggression against Korea because “it will only kill 1.4 million people.” 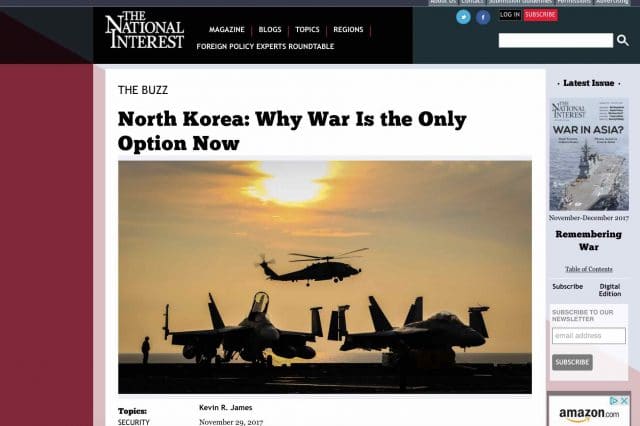 Their lapdog MSM is propagandizing for a “Korea Pearl Harbor.” 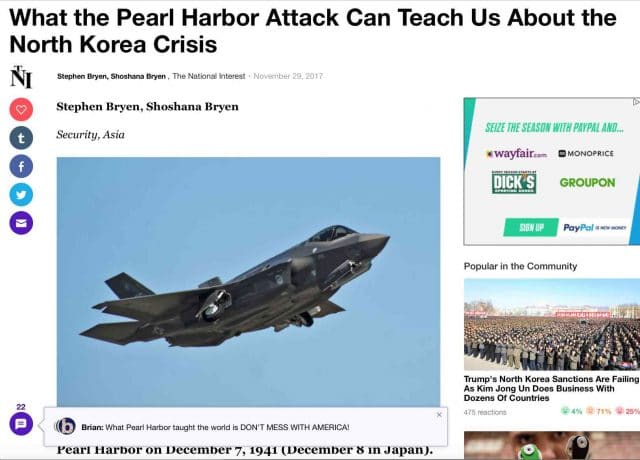 A US war on Korea would likely bring in Russia and China and quickly become a nuclear World War III. That would allow Antichrist to finish the genocide of Palestine under the radioactive fog of war. And it would create the biggest State of Emergency in human history. Leaders would grab total dictatorial powers. None more eagerly than megalomaniacal narcissist Trump.

Jeffrey Epstein buddy and child-rapist Trump, a huge fan of child molester Roy Moore, would love nothing more than to become Designated Dictator of Zionist-Occupied North America. A huge false flag could help the Trumpies consolidate total power and lock up their legion of critics in concentration camps. Trump dreams of becoming Satanyahu’s puppet dictator as Antichrist arises over the bloody smoking ruins of the al-Aqsa mosque and the remaining Palestinians – the real descendants of the Biblical Hebrews – get slaughtered and expelled.

But as they (the satanists) plot, God also plots. And God is the best of plotters. Bibi’s and Trump’s dreams would sooner or later turn into hellish nightmares, as the perpetrators’ own evil inevitably rebounds against them.

I hope and pray the above nightmare scenario doesn’t happen.

But if it does, don’t say I didn’t warn you.