Former adviser to US President Donald Trump Michael Flynn pleaded guilty to lying to the FBI about conversations with then-Russian Ambassador to the US Sergey Kislyak. Some have taken this revelation as evidence of collusion between the Trump transition team and the Israeli government – not Russia, as many mainstream outlets have claimed

Eugene Puryear and Sean Blackmon, hosts of By Any Means Necessary on Sputnik Radio, spoke to Max Blumenthal, author and journalist as well as the senior editor of progressive website AlterNet.

​”Well, [Department of Justice Special Counsel] Robert Mueller and his team of 17 super lawyers has finally found that the Trump transition team colluded with a foreign power to subvert America’s political system,” Blumenthal began. “Actually, they colluded with a foreign power to undermine a sitting American president. You would think there’d be a lot more outrage about this. I actually subjected myself to 30 minutes of Rachel Maddow last night to see if she would actually touch this issue, and she didn’t — because that country is Israel.”

“Michael Flynn really had discussed three orders of business with Sergey Kislyak, then the Russian ambassador to the US. The first of was US-Russian cooperation in Syria to defeat al-Qaeda and [Daesh], which actually is kind of controversial in Washington, especially among the Obama national security officials who had a hand in the program to arm and equip Syrian rebels who are allied with al-Qaeda. But that doesn’t show collusion.”

“The other point was Flynn egging Kislyak to have Russia not retaliate for US sanctions that were imposed under Obama because of unproven allegations that Russia hacked the DNC,” said Blumenthal. “What you have there is Flynn attempting to influence Russia, not the other way around — again, the collusion narrative is undermined.” 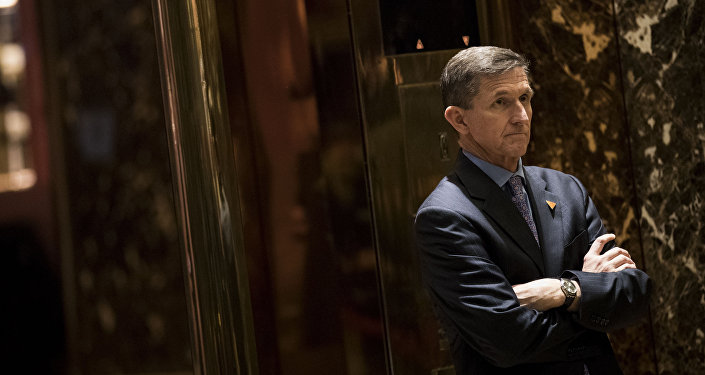 “But then you have a final point where Flynn is asking Kislyak to assert his authority to have Russia veto a United Nations resolution condemning Israel for settlement activity [in the West Bank] — a resolution that Obama planned to abstain from and allow to pass as kind of a final ‘screw you’ to [Israeli Prime Minister] Benjamin Netanyahu.”

“We learned that Flynn was acting here on behalf of Jared Kushner, the presidential son-in-law who is also the son of Charles Kushner, a longtime friend of Benjamin Netanyahu whose family foundation has funded Israeli settlements,” added Blumenthal. “He has basically helped support the political empire of Benjamin Netanyahu for years — in fact, when Jared Kushner was a teenager, he’d have to get up and leave his bedroom when Netanyahu was in town because Netanyahu would stay literally in his bed with his family when he was on trips to New York.”

Trump: ‘Flynn’s Life is Ruined Because He Lied to FBI,’ While ‘Nothing Happened’ to Clinton

“So this relationship with Netanyahu is what all the Israeli government drew on to turn the Trump transition team into its own personal vehicle to attempt to attack Barack Obama and the sitting American administration. This is as clear a case of collusion against an American president with a foreign power that I’ve ever seen in my life, and we’re hearing not dead silence, but it’s being treated as business as usual.”

Blackmon pointed out that many mainstream liberal outlets and voices claimed Flynn’s indictment as a huge victory for the collusion investigation — but the volume quickly dropped as these voices realized that Flynn’s actions did not point to collusion.

Blumenthal concurred. “This pattern is dangerous because you see these stories come out but eventually get retracted it or corrected, but the retraction is buried and so people are left with the impression that there is something there, that this is a huge story, and that Trump is going down.”

“So the Russiagate investigation continues and all of the damage that it caused diplomacy between the US and Russia simply deepens, all as a result of the of anti-Russian atmosphere that’s been cultivated in Washington by this opportunistic and deeply unprofessional media as well as by the Democrats that are desperate to explain away their miserable failure to win against the most beatable candidate probably that’s ever existed in my lifetime.”