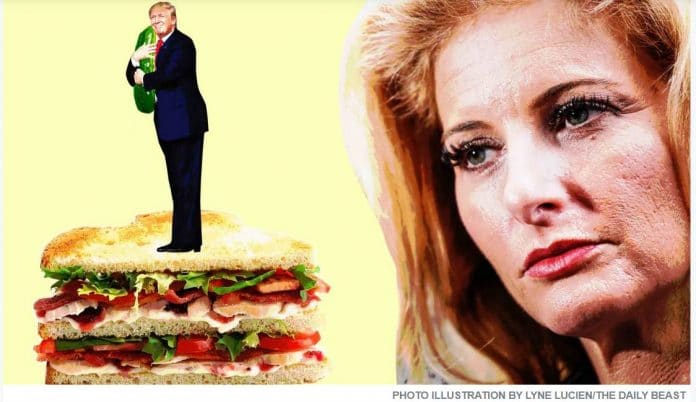 A room service receipt for a lone club sandwich could prove Donald Trump a liar and Summer Zervos a sex crime victim.

Zervos has said that is what Trump ordered after he used a dinner invitation as an opportunity to grope her and grind against her repeatedly in his room at the Beverly Hills Hotel a decade ago.

“Dinner consisted of a club sandwich and fries, which Ms. Zervos and Mr. Trump shared,” reports the complaint that accompanied the defamation suit she filed against him for calling her a liar.

If Zervos had not actually been in the hotel room with Trump, how could she possibly have known exactly what he ordered?

The Hotel’s signature “Sunset Club Sandwich” does and did come with fries, as the complaint says. The complaint adds a detail that makes the account seem all the more convincing when you consider that Trump’s mother, Mary Anne, was famous for arriving at the family’s outer borough apartment buildings in a red Rolls-Royce and visiting their laundry rooms to collect any coins left in the change return slots of the washers and dryers.

“He complained about the price.”

But, as the complaint tells it, the price—$24 now, a bit less in December 2007—was not Trump’s only concern in ordering a single sandwich after Zervos repeatedly pushed him away: