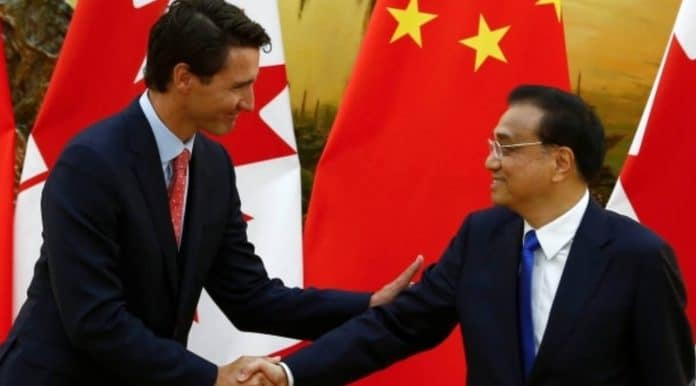 by Matthew Ehret-Kump, Editor of Canadian Patriot Review, for VT

Ever since Canadian Prime Minister Justin Trudeau landed in Beijing for the inaugural Dialogue of World Parties Conference on December 3, mainstream press from all sides of the aisle have been echoing shock over the failure of the highly publicised trip which was heralded as being the long-awaited finalization of China’s participation in the “Canada-China Free Trade Deal”.

This “deal” was not only designed to remove tariffs between countries in order to establish a Canada-China “special relationship”, but also slip in “gender, climate change, good governance and labor” protocols which were strategically designed to bring China back onto the leash of Anglo-American liberal controlling influence.

While it appeared for some time that China was moving dangerously close to accepting this Free Trade deal which was crafted in an obsolete age of Obama-era geopolitics, the unceremonious treatment which Trudeau received upon arrival in China- which included a cancellation of a scheduled press conference, outright rejection of all of Canada’s liberal demands by Premier Li Keqiang, and China’s backing out of its promised partnership in the Canada-UK-China “Anti-Coal Alliance” indicates that China will no longer tolerate the British Empire’s geopolitical games in any form.

The Canadian establishment voice of the National Post aptly observed in complete frustration:

“It was always hard to see how Xi’s vision which is illiberal to the extreme, squared with Trudeau’s Ultra-liberal agenda. That they were irreconcilable should have been apparent before Monday.”

But… the Trans Pacific Partnership was never meant to Die!

At this juncture, it must be noted that Canada’s role as a “Middle Power” chess piece established with the first Prime Minister Trudeau’s “counter-weight strategy” has become increasingly exposed for all to see. That is all, except those Anglo-American authors of this obsolete geopolitical trade deal.

Those authors designed this trap specifically for a world in which the China-isolating Trans Pacific Partnership (TPP) was never killed by a Trump administration which itself was never meant to happen (1).

It was designed for a fantasy world in which Syria was annihilated, Russia subdued, and isolated China brought to its knees, so desperate for resources that it would gladly adopt a Canada honey pot of cheap oil and resources… for a price. That price? That China remain under the grips of an Anglo American Unilateral governance structure subject to the whims of an elite that never learnt the lessons of Rome’s downfall.

Trudeau’s total lack of principle made him the perfect puppet in a time when keeping British Canada close to all sides of the Great Game was most useful for the British. Above, Pierre Trudeau gets chumy with Castro, Chairman Mao, Thatcher and Reagan

In former Cold War Days, when the world was broken more evenly into two opposing centers of gravity, such an Anglo-Canadian policy of shifting alliances between capitalist and communist powers at the expediency of the London-based players of the “Great Game”, served a use for the Empire.

Befriending Cuba, or China one day and the USA the next was the special role assigned to bi-polar British Canada. Today, with Trump’s strategic alliance maturing between the USA and China and the fully matured Russo-Sino special relationship we are now at the cornerstone of new global paradigm, rendering this old formula obsolete, although the game masters of the old paradigm will not admit it.

A New Era of Win-Win Cooperation

While the current policy outlook of the Canadian political establishment is unfortunately committed to advancing the “old paradigm” agenda of zero-growth post-industrialism, manifested in these desperate attempts to induce China to return into the cage of the British Great Game- there is another Canada which China would love to work with as a partner and friend.

This is the Canada that acts not in the interest of a sociopathic Britian, It is a Canada which seeks to join the Belt and Road Initiative now sweeping the globe and lifting billions out of poverty along the way.

This would mean a revolutionary sweeping away of geopolitical thinking dominant since the Diefenbaker/JFK era ended. It would mean a revival of agro-industrial growth, centred around high speed rail, water, energy and space development, not to mention the long awaited opening up of the arctic in alignment with the decades old grand vision of Lyndon and Helga LaRouche.

As the Chinese Ambassador to Canada Lu Shaye stated in the wake of the historic May 2017 Belt and Road Conference in Beijing;

The government of British Columbia signed the Belt and Road cooperation documents with China’s Guangdong provincial government last year. We hope that the two local governments will take quick actions and actively participate in the construction.

China is also willing to cooperate with Canada to jointly explore the third-party markets under the Belt and Road initiative. The initiative responds to the trend of the times, conforms to the law of development, and meets the people’s interests. It surely has broad prospects. I hope Canada will not miss any important opportunities for cooperation.”

So with such a bright future clearly in view and with such great nations as Russia, China, India, Pakistan, and now even the United States getting on board, what are we waiting for exactly?

(1) The Trans-Pacific Partnership was designed as a “NAFTA of the Pacific” which served the two-fold purpose of 1) creating a legal basis for corporate dominance of sovereign nations caught in its web while keeping the USA in a dominant geopolitical position over Asia, and 2) isolating China from 12 key neighboring Pacific nations. This agenda was advanced as a parallel measure to Obama’s 2011 “Pivot to Asia” military containment strategy of China also known by thinking analysts as the “Thucydides Trap”