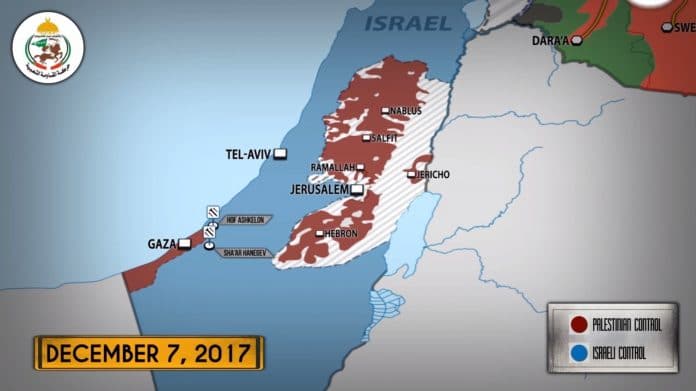 On December 7, the Palestinian al-Nasser Salah al-Deen Brigades fired several rockets at the Israeli settlements of Hof Ashkelon and Sha’ar HaNegev north of the Gaza Strip. The group said in a statement that this was only the first response to the US decision to recognize Jerusalem as Israel’s capital and said that more actions will follow. The Israeli Defense Forces said that a battle tank and a warplane had targeted two posts in Gaza in response to the shelling.

According to local sources, Israeli warplanes are highly active over Gaza as the situation escalates.

Earlier, Politburo Chief of the Palestinian Hams movement Ismail Haniyeh called for an uprising against Israel. He said that December 8 “should be a day of rage and the beginning of a major effort to rise up, which I will name the intifada of Jerusalem and the West Bank’s freedom.”

“As we liberated Gaza, we are able… to free Jerusalem and the West Bank by the way of this popular struggle,” he added.
Haniyeh emphasized that the US decision amounted to a “war declaration against Palestinians” that “killed” the Israel-Palestinian peace process.

Meanwhile, tensions between Palestinians and Israeli forces have been reported in multiple areas. The situation is heading towards a dangerous level of escalation.

In Syria, Hay’at Tahrir al-Sham (formelry Jabhat al-Nusra, the Syrian branch of al-Qaeda) and its allies repelled an attack from the Syrian Arab Army (SAA) and the National Defense Forces (NDF) on the village of al-Shakusiyah in northeastern Hama. Militants allegedly destroyed a SAA battle tank on Rabdah Hill with an ATGM.

Meanwhile in southern Aleppo, west of Khanasser, the SAA destroyed 3 HTS vehicles and killed 10 members of the terrorist group.
ISIS resumed its operations in northeastern Hama and entered the villages of Abu Ajwah, Muylah Ben Hadib, Shihat al-Hamra and Qasr bin Wardan which had been controlled by Hayat Tahrir al-Sham.

According to pro-government sources, the Syrian Tiger Forces will soon be redeployed to northeastern Hama and southern Aleppo after they have finished their tasks in eastern Syria following the liberation of the entire western bank of the Euphrates from ISIS.