Home WarZone ‘Reporters Without Scruples’ fails to derail conference on White Helmets Terrorists
Share
Twitter
Pinterest
WhatsApp
Linkedin
ReddIt
Email
Print
Tumblr
Digg
[ Editor’s note:  VT’s own investigations have long proven that the “White Helmets” are one in the same as ISIS and al Qaeda, with many of their members long time terrorist operatives funded by western spy agencies.  Everything they do is fake… Gordon ]
–

Following unprecedented demands for censorship and attempted suppression of press freedom at the Geneva Press Club, the speakers and organizers of the ‘White Helmets – True Agenda’ event got police protection during the conference on the 28th November.

According to its website, Reporters Without Borders (RSF) is “the world’s biggest NGO specializing in the defense of media freedom, which we regard as the basic human right to be informed and to inform others.”

However, last week in Geneva the creators of the Predators of Press Freedom campaign rode roughshod over their own lofty mission statement. The Geneva Press Club (GPC) announced an event that would present the darker side of the Oscar-winning, multi-million-dollar internationally funded White Helmets, operating in Syria alongside Jabhat al-Nusra (Al-Nusra Front) and other US Coalition-armed & financed terrorist groups.

The event promised to give a platform to diverging views on the role of the White Helmets, rarely explored by corporate media in the West who unreservedly promote this hybrid group of self-anointed humanitarians. 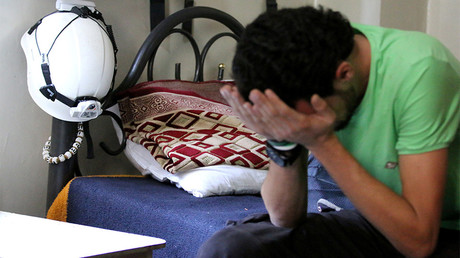 The event was entitled “They Don’t Care About Us – White Helmets True Agenda.”

My legitimacy as a journalist was questioned on the basis that I have not written for any “soi-disant” independent media (meaning MSM), but my name is cited over 200 times in the Russian media such as RT and Sputnik. A mortal sin by RSF standards who claim to uphold the Voltaire principles of my right to air my findings even if they challenge the corporate media status quo.

Tschopp and Dubois informed Mettan that the event would bring disrepute to the GPC and would force them to reconsider their membership. The event should be canceled according to these ‘defenders’ of freedom of speech.

Mettan described this unprecedented attack as “stupefying” and pointed out:

“I have never seen anything like it. An organization defending press freedom is telling me to censor a conference. This kind of pressure to cancel press conferences usually comes only from countries known to be dictators, such as Saudi Arabia, Egypt or Bahrain. This is the first time such a demand has come from a democratic country and an organization defending the freedom of the press! It goes without saying, I will not be following up. That would be an insult to the profession of journalism.”

Mettan courageously refused to bow to such pressure and stood his ground against this attack on press freedom in Switzerland, the popularly perceived cradle of neutrality. He upheld the principles that have been the bedrock of the GPC press freedom philosophy by inviting organizations supporting the White Helmets to attend the conference or to organize their own event at a later date. No response was forthcoming from the various PR agencies that manage the White Helmet publicity campaigns.

Instead, Syria Campaign went on the offensive in lockstep with RSF. Syria Campaign was established with seed-funding from the Syrian oil baron, Ayman Asfari, residing in the UK and known to be funding the UK Conservative party.

Since the establishment of the White Helmets in 2013, Syria Campaign has mainly been responsible for the numerous advertising campaigns that promote and effectively whitewash the questionable affiliations and activities of the so-called “first responders” in Syria.

Astonished to see that the @genevapressclub in Switzerland has invited conspiracy theorist & blogger @VanessaBeeley to speak about the White Helmets at the start of the next round of scheduled peace talks on Syria. pic.twitter.com/mzbUkQfcR7

So why this predatory mind guarding against these organizations? Why this group-think exclusion policy regarding any criticism of the White Helmets? This organization is funded by taxpayer contributions from a number of EU & Gulf states, the UK & the US, and they should be held accountable if there is evidence of ethical breaches or violations of human rights during their operations as an integral component of the “regime change” alliance operating in Syria.

Who are RSF and why are they attempting to silence independent analysis of the White Helmets that deviates dramatically from the image portrayed of them by their fawning media and PR entourage? Much has been documented of RSF’s role as mockingbird media, funded by organizations, such as USAID and NED (National Endowment for Democracy) whose sole purpose is to expand US interests globally.

From Cuba to Venezuela & beyond, RSF has been at the coal face of CIA violent coup attempts and aggressive US military interventions. 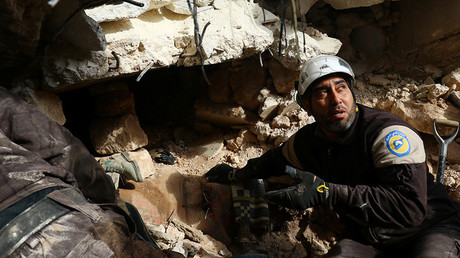 During its campaign against Cuba, RSF was even funded by the extreme far-right organization, the Center for a Free Cuba, “whose president, Frank Calzón, was a former leader of the terrorist organization Cuban American National Foundation.” Co-Founder of RSF, Robert Menard is currently mayor of Beziers, France and was elected with the support of France’s National Front party.

A look at RSF’s current sponsors throws another name into the ring – Omidyar. The Omidyar Network Foundation “invests in and helps scale innovative organizations to catalyze economic and social change.” Humanity United is a member of the Omidyar Group and is a US-based foundation “dedicated to building peace and advancing human freedom.” Humanity United contributed $10 million to the Freedom Fund, an ‘anti-slavery’ NGO whose CEO is Nick Grono.

“The Fund was announced by President Bill Clinton at the Clinton Global Initiative in September [2013], who declared, “This is a huge deal and we should all support this.”

The Freedom Fund was established six months after the creation of the White Helmets in Turkey, by British ex-military “private security” expert, James Le Mesurier.

Nick Grono is one of the four initiators of the Jo Cox Fund, that was set up on the same day Labour MP Jo Cox was murdered – on the 16th June 2016. The White Helmets were nominated as one of the beneficiaries of this fund.

Omidyar is not directly funding the White Helmets. Nick Grono has received funding from the Omidyar group and he co-created the Jo Cox fund, which has raised over £2 million, a percentage of which has gone to the White Helmets. It is hard to ignore this connection or the effect it may have had upon RSF’s decision to intervene in the event that threatened to expose the White Helmets as a fraudulent organization.

Another of RSF’s sponsors is the French Foreign Office who “supports [their] work in countries it regards as priorities.” Syria has patently been a “priority” for France since it released itself from French colonial rule in 1946.

The French FO also funds many of the “moderate” extremist media channels operating inside Syria which include the Aleppo Media Center that works in unison with the White Helmets to distribute the proven war fiction, directed & produced by & starring the White Helmets, among Western media outlets. Regime change supporting fiction such as Omran Daqneesh or the Jib Al Qubbeh “bodies-in-the-streets-of-Aleppo” narrative in November 2016. 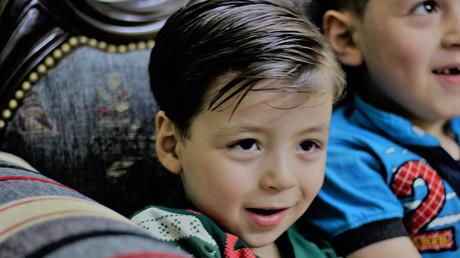 Based upon this analysis of the potential for bias among RSF board members and Syria Campaign’s need to protect their number one propaganda asset in Syria, it is no longer surprising they both reacted so violently against an event that might “muddy the waters” of public perception of this Western intelligence concept, that has been so successful in underpinning the US/UK imperialist project in Syria.

The attacks on such events, journalists, and analysts who expose the White Helmets members’ criminal actions are not to preserve the Syria White Helmets per se but to protect the ‘integrity’ of the concept & to ensure it is fit for purpose in future neo-colonialist proxy interventions & multi-spectrum military campaigns.

The event itself was well attended, and the speakers combined their analysis & research with a documentary made by RT’s Murad Gazdiev that gave a voice to Syrian civilians who had lived under terrorist occupation for more than four years in East Aleppo. For these civilians, the White Helmets were “Nusra Front aka Al-Qaeda civil defense.” They did not “help” civilians. Instead, they stole from them, mistreated them or left them to die under the rubble while they rescued the armed militants.

Question time was an exercise in censorship by exclusion, silence met the request for questions from Mettan. A silence broken only by a few ‘alternative’ media representatives & members of the public in the audience. Eventually, Le Temps journalist, Stephane Bussard raised the question of the legitimacy of the speakers. A curious non-sequitur in response to the considerable evidence that had been presented to him that challenged the popular myths surrounding the White Helmets.

Bussard’s subsequent article was a blatant propaganda maintenance and obfuscation project. He failed to address any of the points made by the speakers and maintained the hard-line smear tactics that had initially been deployed by RSF. Bussard erased the voices of the majority of Syrian people as corporate media in the West has done for the last seven years.

He deliberately ignored the accusations made by the victims of the tragic Rashideen car bombing in Aleppo, on 15th April 2017. Bussard was too focused on protecting the self-corroded image of the White Helmets.

Guy Mettan, president of the Geneva Press Club, embodies the quintessential principles of journalism and is a valiant agent for the people. Syria Campaign, RSF, Le Temps & associates have exposed themselves to be the emperors with no clothes, agents of power & defenders of a justice or “freedom” that serves only the corporate elite & philanthrocapitalists.

Thanks to Mettan, free speech is proven to be more than a hollow aspiration, and the Western propaganda constructs have been dealt yet another mortal blow.

Vanessa Beeley is an independent journalist and photographer. She is associate editor at 21st Century Wire.