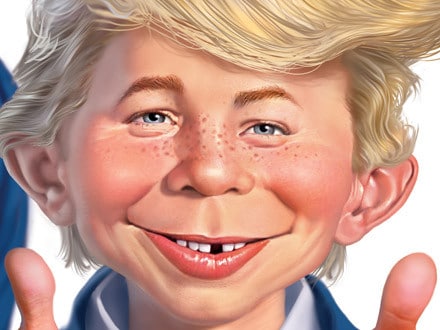 Editor’s note:  With Trump now officially a Zionist puppet, here to push America into another phony war, it is time to reflect on the scum that backed him.  Those of us who predict events with some record of success know Trump and his Bolshie masters are planning a huge false flag attack on America to push for a new war.  We begin:

Bolshevism is the real religion behind Zionism.  Bolshevism promotes mass human slavery at the hands of a select ruling class.  To achieve its ends, Bolshies work hand in hand with Wall Street, the City of London, the Rothschilds, the Vatican and their agents, the CIA, RAW, MI6, Mossad and others, to keep mankind in decline.

The press is just one of their many tools.  Governments are simply another.  Their greatest tool of all is “dumb folks.”

Even as a small child, growing up in Detroit, it was easy to see.  Those who know history or who take responsibility for their own lives, credit trade unions for things like decent public schools, fire departments, clean water and air, a minimum wage and nearly every other positive act government is involved in.

Those who oppose unions, generally the ignorant and the “outdoor toilet” folks, never paid into Social Security in the first place, field hands often don’t, and had no reason to want to protect it from the thieving GOP.

The mob used to work with their partners, the plant owners, supplying scabs or strike breakers, often American Legionaires.  The VFW fought alongside the Unions.  This is forgotten history, how the American Legion, known then as the “Black Legion” was considered a part of the resurgent KKK.

They called themselves Nazi’s but were everything but.  Like the ‘Stormers” of today, the mama’s boy ass kissers, the Legion of that day worked for Wall Street and the big banks, doing what they could to kick the “little guy” in the ass.  This is real history, not the kind you read in the books fed to you by, you guessed it, the Bolshies who run America.

Those with real backgrounds in history know that lobbying by unions, the AFL-CIO, UAW and such, are what made America just a bit free, for awhile, until it was all taken away, when America was stolen from her people because, without unions, nobody was left.

Those who don’t know this are not just part of the problem.  Their existence itself, as subhumans allowed to vote, certainly disproves Darwin.

It has always been dirt simple, one side wanted to legalize thievery, phony mortgages, looting of pension funds, air, ground and water pollution and keep wages down to nothing.

They love shoddy goods, poisoned food, medicine that makes people sick and keeping prisons, now privatized, full as possible of everyone but the rich mobsters that sit at the heart of the Republican Party.  We are talking names like Bush and Romney and their Rothschild bosses.

Backing them are the simple minded followers of Christian Zionism, to them it is Israel first, America second, to them all trust is in corporations, trust the rich, fight their wars, pay their bills, kiss their asses and keep buying “male enhancement formula,” part and parcel to the limp-membered right.

In an America rife with homelessness, new records this month while markets skyrocket from tax breaks for the rich, our standard of living, our life expectancy and America’s collective mental health plummet.

Adding to the mental deficiency of the officially uneducated are those subjected to the “politically correct” institutions of the 80s and onward, and we aren’t talking about “liberalism.”  We are talking the real religion of the right, of the neo-cons, of the Zionists, and that is bolshevisim.

Can anyone out there define it?  If I were braver, I would suggest that more read the “protocols” by those “learned elders,” documents long proven “phony” as Meliana Trump’s visa application.

The rules are simple.  There are sheep and there are those who shear them.  Bolsheviks are the folks that point here and there, a finger pointing at the Jews or at the “left” or Muslims when all the while it is the gangsters, centuries of them, lots of names, Kosher Nostra, the Mafia, the Illuminati, the Neo-cons, Wall Street, the City of London or a dozen or more secret societies.

Those who do their work are the stupid.  Top of the heap are “White Nationalists” followed by various Zionist organizations.  With them are the big banks, the think tanks, the TV networks like CNN and Fox, who sound different because they are told to sound different, different but exactly the same.

It is all “exactly the same” but different or not so different at all.  Those who think they understand, we can only hope they die in agony but there are no guarantees.  After all, that would take a god that pays attention and meets out vengeance against the sinful.

Let’s get some comments going here.  Let’s see if anyone gets it.  Those who do risk death by loneliness.