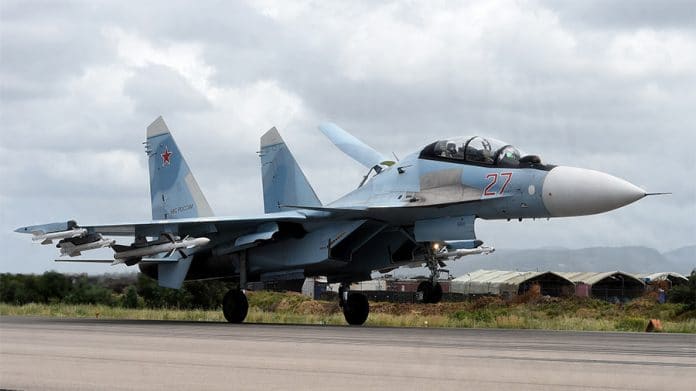 FILE PHOTO: A Russian Sukhoi Su-35 bomber lands at the Russian Hmeimim military base in Latakia province, in the northwest of Syria © Vasily Maximov / AFP

A Russian interceptor has been scrambled to stop a rogue US fighter jet from actively interfering with an anti-terrorist operation, the Russian Defense Ministry said. It also accused the US of provoking close encounters with the Russian jets in Syria.

A US F-22 fighter was preventing two Russian Su-25 strike aircraft from bombing an Islamic State (IS, former ISIS) base to the west of the Euphrates November 23, according to the ministry. The ministry’s spokesman, Major General Igor Konashenkov described the episode as yet another example of US aircraft attempts to prevent Russian forces from carrying out strikes against Islamic State. 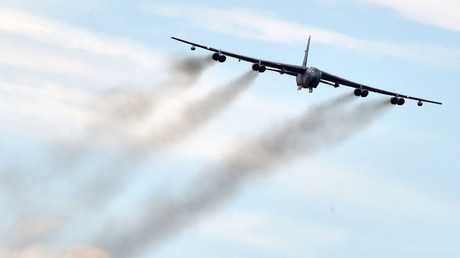 “The F-22 launched decoy flares and used airbrakes while constantly maneuvering [near the Russian strike jets], imitating an air fight,” Konashenkov said. He added that the US jet ceased its dangerous maneuvers only after a Russian Su-35S fighter jet joined the two strike planes.

The major general went on to say that “most close-midair encounters between Russian and US jets in the area around the Euphrates River have been linked to the attempts of US aircraft to get in the way [of the Russian warplanes] striking against Islamic State terrorists.” He also said that the US military officials provided no explanation for the November 23 incident as well as other, similar encounters.

The statement came as a response to the Pentagon’s claims about “an increase in unsafe behavior” by Russian warplanes. “We saw anywhere from six to eight incidents daily in late November, where Russian or Syrian aircraft crossed into our airspace on the east side of the Euphrates River,” Lt. Col. Damien Pickart, the spokesman for US Air Force Central Command, told CNN earlier on Saturday.

Konashenkov said that any claims made by US military officials concerning the fact that there is “any part of the airspace in Syria that belongs to the US” are “puzzling.” Konashenkov also said that “Syria is a sovereign state and a UN member and that means that there… can be no US airspace ‘of its own.’ Unlike the Russian Air Force, the US-led coalition is operating in Syria without any legal basis,” he added. 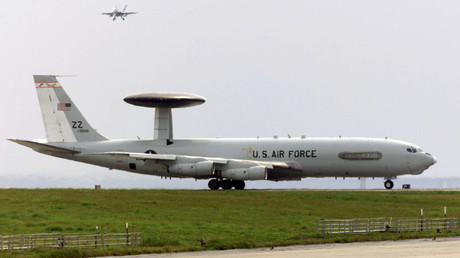 Pickart also said that the US’ “greatest concern is that we could shoot down a Russian aircraft because its actions are seen as a threat to our air or ground forces.” Earlier, he also told the New York Times that it has become “increasingly tough for our [US] pilots to discern whether Russian pilots are deliberately testing or baiting us into reacting, or if these are just honest mistakes.”

The New York Times also listed several cases of what the US describes as “unsafe behavior” by the Russian jets, citing the data provided by the US air base in Qatar. The US accused the Russian pilots of “crossing into the airspace east of the Euphrates” and flying “dangerously close” to the “allied forces,” adding that such actions could be interpreted as “threatening” and the US pilots were “in their rights” to fire in “self-defense.”

Konashenkov said in response that the US Air Force should rather focus on destroying Islamic State in Iraq than provoking close encounters between the US and the Russian jets.

Pickart said to CNN that the US military regularly talk to their Russian counterparts “in the daily de-confliction calls.” However, the Russian military repeatedly pointed out that the US is reluctant to share its plans for combat aircraft operations, and acts secretively in Syria.

The US and the Russian military have traded jibes over various incidents involving both countries’ warplanes in the Syrian skies. Washington accused Russian jets of not carrying transponders allowing air-traffic controllers to identify them, while Moscow repeatedly said that the US military only “occasionally” indicate the time period and an approximate area of their air operations without even giving the types of aircraft and their affiliation. 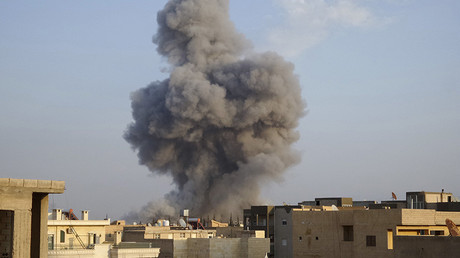 Back in 2015, the US and Russia agreed upon the mutual flight safety memorandum regulating the flight paths and contacts of the countries’ air forces in Syria during an emergency situation. The two countries also set up a hotline for their militaries to discuss the approximate locations and missions of planes in an attempt to avoid operating in the same airspace at the same time.

However, both sides later repeatedly accused each other of being reluctant to use the instruments at their disposal to reconcile the issues related to their actions in Syria. Most recently, Colonel Jeff Hogan, deputy commander of the air operations center at the Qatar base, called the daily phone calls between the US and Russian military “contentious.” The US also said that the dialogue does not always reflect what happens in the skies over Syria.

In January, Konashenkov complained that the US officers often “simply cannot be found on the other side of the ‘hotline’ in Qatar, designed to discuss and resolve contentious issues” and urged them to “use this hotline more often and for its direct purposes.”