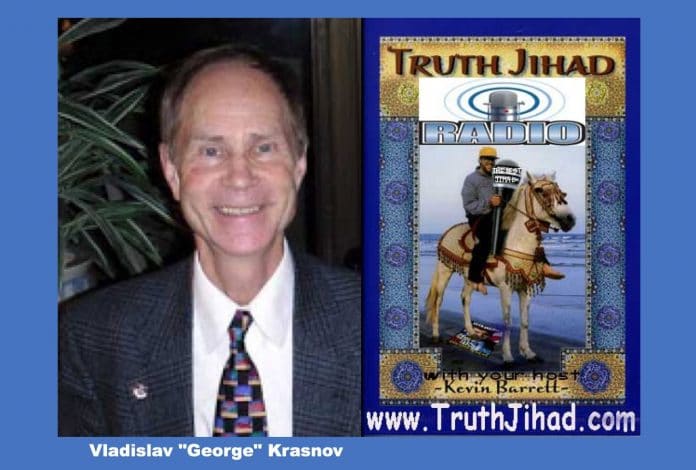 Note: The video version of this interview is posted at my Patreon page.

Dr. Vladslav Krasnov (also known as Wladislaw “George” Krasnow) of RAGA.org was a dissident in the former Soviet Union, where deviating from the official Communist Party line was a serious thoughtcrime. He defected to Sweden and then the United States in the 1960s, earned a doctorate in Russian Literature at the University of Washington, and has written three books and worked for many leading think tanks and government agencies. Today, he wonders whether Russia and the United States have switched places: Now it’s the USA that surveils its citizens, doesn’t tolerate dissenting voices, and insists on inflicting its mendacious official perspective on everyone, everywhere; while Russia has left Communism behind and emerged as a pluralistic nation, whose worst “crime” (according to the Masters of the Universe in Washington) is allowing Western dissidents to reach a larger audience via RT and Sputnik.

And then there is Zionism, which is even more ruthlessly monologic. Dr. Krasnov argues that Solzhenitsyn’s newly-translated The Crucifixion of Russia: A History of the Russians and the Jews is fair minded and accurate…which leads one to wonder why it was suppressed, as the translator describes:

“Published in the original Russian in 2002, the book was received with a firestorm of rage and denunciation from the literary and media world, from the Jews, and from almost the entire intelligentsia of the established order in the West…”  Why would this important work by one of the 20th century’s greatest writers be suppressed?  Is Solzhenitsyn, whose works were suppressed by Russian communists during the Cold War, now being censored by Zionists and Jewish supremacists? What does that say about what used to be called “the Free World”?

Is the cure for what ails international, intercultural, and interfaith relations dialogue, dialogue, and  more dialogue? Are the many varieties of secular humanism—including Marxism, Zionism, and ARRF—generally even more intolerant than the traditional religions they oppose and supplant? Are Americans and Israelis unusually insensitive to the voice of the Other? Is Mikhail Bakhtin’s theory of dialogism and polyphony the key to world peace?  Listen to this interview and reflect…