The European Union seems to demonstrate that Netanyahu sometimes can be ignored—preferably with the finger. Netanyahu thought that victory was at hand when his puppet, Donald Trump, announced earlier that Jerusalem is the capital of Israel. Netanyahu was hopping that European nations—by his account, “all or most”—would follow suit. But the mad man in Tel Aviv got a big surprise.

The European Union universally rejected Netanyahu’s Talmudic project. We are told: “The EU’s diplomatic chief Monday bluntly rejected Israeli Prime Minister Benjamin Netanyahu’s suggestion that Europe would follow the US in recognising Jerusalem as the Jewish state’s capital, saying there would be no change to its stance on the holy city.”

It is said that “the 28-nation bloc’s foreign policy head Federica Mogherini gave him a stern rebuff, telling him to “keep his expectations for others.” That’s not all. Mogherini, who is an Italian politician and the current High Representative of the European Union for Foreign Affairs and Security Policy, added that Netanyahu:

“can keep his expectations for others, because from the European Union member states’ side this move will not come.”

That really hurts, particularly when the mad man wasn’t prepared to hear such a pointed rebuke. Netanyahu thought that virtually every European country was his puppet. You remember what he said about America back in 2011? “I know what America is,” he said. “America is a thing you can move very easily, move it in the right direction.”[1]

Well, he obviously thought that he could work out his Talmudic magic in the same way when it comes to deluding the European Union. That didn’t happen, and surely the mad man in Tel Aviv isn’t happy. With respect to Trump’s announcement, Netanyahu risibly declared:

“It doesn’t obviate peace, it makes peace possible, because recognising reality is the substance of peace, it’s the foundation of peace.”

What he is essentially saying here is that recognizing the colonization of the Palestinian lands and territories is a path to peace. Once Jerusalem is recognized as the capital of Jerusalem, the next step is to kick the Palestinians, including Gazans, out once and for all. In fact, Israel has been doing exactly that since 1948.[2] And Netanyahu has been following that pattern since he took office. Listen to this:

“During a visit to Jerusalem by Vice President Joe Biden, Israel announces 1,600 new housing units for Jews in traditionally Arab East Jerusalem. Secretary of State Hillary Clinton places an angry 45-minute call to Netanyahu and tells CNN that the announcement was ‘insulting.’

“On another White House visit, Netanyahu fails to commit to a settlement freeze. By many accounts, a frustrated Obama leaves a working meeting with his Israeli guest to dine with his family.”

In response to this, journalist Gil Hoffman of the Jerusalem Post wrote that Netanyahu was “giving the American administration the finger.”[3]

Netanyahu forgot that Obama, as journalist Ethan Sherwood Strauss put it in a different context, is “the finger wager in chief.” When Netanyahu showed up in the U.S. to talk about the so-called peace process, Obama essentially told the mad man that he had more important matters to take care of:

“Bibi lectures Obama in front of reporters during a press availability in the Oval Office, explaining recent Jewish history to a visibly irritated U.S. president. Diplomatic experts call it a startlingly aggressive move.” 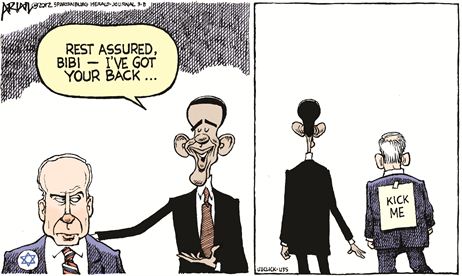 “In what Reuters calls ‘a highly unusual rebuff,’ Obama snubs a request from Netanyahu for a meeting during the Israeli prime minister’s planned visit to New York for a United Nations meeting.”

2014 was no exception. John Kerry had a reputation of sneering at Israel’s psychopathic behavior in private. When the Israeli forces were slaughtering Palestinian civilians and bombing houses indiscriminately, Kerry did not hesitate to say, “It’s a hell of a pinpoint operation. We got to get over there…I think it’s crazy to be sitting around.”[4]

The questions again and again are simply these: why is no serious person taking the Israeli regime seriously? Why has Netanyahu become one of the greatest jokers in the twenty-first century?

Well, Netanyahu does not want to abide by practical reason. He has subscribed to an essentially diabolical ideology which does not allow him to think clearly. He is morally and intellectually crippled and blind, and he is not prepared to leave the world of unreasonableness behind and embrace the truth. In that sense, Netanyahu and indeed Israel are dangerous to the world and to decent Israelis who want nothing to do with manipulation.

As former CIA officer Paul R. Pillar himself pointed in the past, the world’s gravest threat is not Iran or the Palestinians or even Hezbollah. The world’s gravest threat is Israel.[5] Pillar even took one step further when a number of scholars decided to boycott Israel. He said that to boycott Israeli academic institutions was “a righteous action.”[6] Pillar quoted John Tirman of MIT saying that “Israel’s belligerent and persistent obstructionism is not the action of an ally.”[7]

If Pillar’s assessment is not worth a dime, then let us listen to Gabor Mate. Mate was in concentration camps during Nazi Germany and is now a medical doctor:

“In Gaza today we find ways of justifying the bombing of hospitals, the annihilation of families at dinner, the killing of pre-adolescents playing soccer on a beach.

“In Israel-Palestine the powerful party has succeeded in painting itself as the victim, while the ones being killed and maimed become the perpetrators. ‘They don’t care about life,’ Israeli Prime Minister Benjamin Netanyahu says, abetted by the Obamas and Harpers of this world, ‘we do.’

“Netanyahu, you who with surgical precision slaughter innocents, the young and the old, you who have cruelly blockaded Gaza for years, starving it of necessities, you who deprive Palestinians of more and more of their land, their water, their crops, their trees — you care about life?

“There is no understanding Gaza out of context — Hamas rockets or unjustifiable terrorist attacks on civilians — and that context is the longest ongoing ethnic cleansing operation in the recent and present centuries, the ongoing attempt to destroy Palestinian nationhood.

“The Palestinians use tunnels? So did my heroes, the poorly armed fighters of the Warsaw Ghetto. Unlike Israel, Palestinians lack Apache helicopters, guided drones, jet fighters with bombs, laser-guided artillery.

“Out of impotent defiance, they fire inept rockets, causing terror for innocent Israelis but rarely physical harm. With such a gross imbalance of power, there is no equivalence of culpability.

“Israel wants peace? Perhaps, but as the veteran Israeli journalist Gideon Levy has pointed out, it does not want a just peace. Occupation and creeping annexation, an inhumane blockade, the destruction of olive groves, the arbitrary imprisonment of thousands, torture, daily humiliation of civilians, house demolitions: these are not policies compatible with any desire for a just peace. In Tel Aviv Gideon Levy now moves around with a bodyguard, the price of speaking the truth.

“I have visited Gaza and the West Bank. I saw multi-generational Palestinian families weeping in hospitals around the bedsides of their wounded, at the graves of their dead. These are not people who do not care about life. They are like us — Canadians, Jews, like anyone: they celebrate life, family, work, education, food, peace, joy. And they are capable of hatred, they can harbour vengeance in the hearts, just like we can.”[8]

Now we know why Netanyahu is essentially receiving the finger. He doesn’t want peace. He wants to grab more lands and wipe out the Palestinians. Trump obviously thinks it’s a great way to go. But the European Union ain’t buying it.