As a Muslim I am shocked, SHOCKED that so many “successful” American men have been exhibiting typical alpha male primate behavior.

Who’d a thunk it? Post-Christian American society is a materialistic sexual free-for-all. The only rule is “grab everything you can get away with grabbing.” Chimp-in-Chief Trump is on record bragging about that, and why not? Look where it got him. 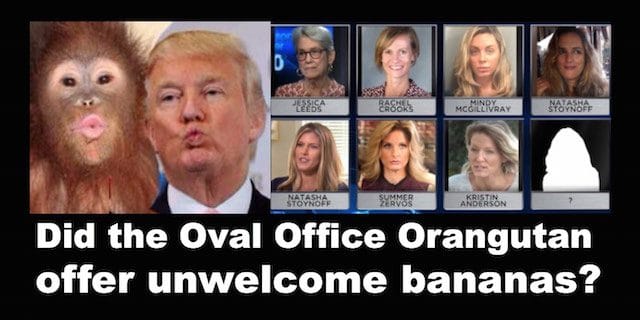 The USA seems to oscillate between phases of hysterical libertinism and even more hysterical puritanism. Our national obsession, the “pursuit of happiness,” naturally gravitates towards the lowest common denominators: social/material “success” and bestial “pleasure.” Then the emptiness of such pursuits catches up with us, and we revert to the witch-hunt frenzies of our Puritan ancestors.

So let me deprive you of a few minutes’ pursuit of happiness to explain the Islamic system of socio-sexual ethics. Like its Christian counterpart, it begins by channeling sexual energy (especially the testosterone-fueled frenzies of young males) into the reproductive family unit. Non-marital sexual relations of any kind are not just taboo, but serious crimes against society.

“But wait a minute!” howl the pursuers of happiness. “How can consensual activity that harms no-one be a crime?”

Let’s ask René Girard, the greatest Christian thinker of the 20th century. Girard explains that we humans are governed by mimetic desire. We see what other people desire (and have) and instinctively desire the same thing. The clash of everyone’s desires-for-the-others’-desires constantly threatens to explode into chaos and violence, a war of all against all. To live together peacefully and productively, we need a regulatory mechanism to keep a lid on mimetic desire.

Girard argued that the main regulatory mechanism in traditional (pre-monotheistic pagan) societies is scapegoating and human sacrifice: We blame an innocent person or group for our own desire-driven chaos and violence, and then stage a “holy lynching.” Hence the link between religious emotions and human sacrifice: The crucifixion (the sacrifice to end all sacrifice) became the central pillar of our ancestors’ social system, while its modern counterparts (the Holocaust, 9/11) become modern “sacred sacrifices” that ground the secular humanist myths today’s elites live by. Question the modern dogmas about these sacrificial events, and you will quickly be targeted by today’s equivalent of the Spanish Inquisition. You’d better believe that Hitler and Bin Laden were evil, while we are pure and innocent, OR ELSE!

Question the official sacred myths about these foundational human sacrifices and you might lose your job or go to prison.

We Muslims have a sacred code of ethics that keeps a lid on mimetic desire without undue emphasis on human sacrifice stories. (Yes, we do celebrate Abraham’s non-sacrifice of his son on Eid, but this isn’t as central to Islam as the Crucifixion is to Christianity.)

According to the Islamic sacred code of ethics, it is pointless to pursue happiness by seeking social and material success and physical pleasure. The only distinction between people that matters is not social status, wealth, or power, much less sexual pleasure or conquests, but piety. To the extent that we are real Muslims, we see the saints and pious scholars as socially “above” us, whereas people who are rich or otherwise successful in the material world are likely to be “below” us due to their substitution of the vice of this-worldly desire for the virtue of piety. In other words, social status and authority, and hence power (or a good bit of it) derive from piety, not wealth.

If you are Muslim and happen to run into Donald Trump, you view him as the social equivalent of a Drunken bum on the street: definitely not the kind of person you would ever want to invite into your house.

To keep the Islamic system working, it is vitally important not to allow material and especially sexual temptation to be publicly visible, where it can seduce the unwary into abandoning the Islamic value system and adopting a “pursuit of happiness” system that leads the individual and society into perdition. This is why in Islamic societies, houses often look nondescript, unimpressive, or even tawdry on the outside, while their hidden interiors sport beautiful decorations, hand-painted tiles, courtyards with flowers, orchards, and fountains, and so on. A fancy-looking exterior would provoke envy, nudging people towards a materialistic value system.

Sexual temptation, even more than pecuniary temptation, is a highly contagious visual disease. There must be absolutely no public sexual expression in an Islamic society.  (When I lived in Morocco in 1999-2000, young unmarried people could be arrested for holding hands or visiting a café together, which at first struck me as weird, but now seems eminently sensible – as do similar if less draconian restrictions in contemporary Iran, which I have visited four times in recent years.)

When I grew up in the 1960s Midwest, the omnipresent public sexuality that drives today’s young people to distraction did not exist. Then in the 1970s and 1980s my young adulthood was badly messed with by the so-called sexual revolution. Reflecting on my life, and on those of others from previous and succeeding generations, I can easily see the advantages of the Islamic system.

“But wait a minute! No booze? No promiscuity? What do you guys do for fun?”

In other words, what do we Muslims get in return for giving up the pleasures of chasing wealth, social status, and feel-good kicks? The theologically correct answer is “paradise.” In the here-and-now, though, we also get a monumental psychological reward: inner peace. To the extent that you stop feeding the inner demons of greed and lust, you feel cleaner, less distracted, peaceful, “empty” in the good sense, the sense that Buddhists might also recognize. The five-times-daily salaat prayer provides us moments to experience such sensations in especially intense form. So does the Ramadan fast— though it takes a few days to get past the food/caffein withdrawal headaches and reach the stage where the inner peace and accompanying inner light start to really glow.

So as America convulses through its current phase of lynching various alpha male primates for typical unregulated-primate behavior, people like Donald Trump and Harvey Weinstein have a perfect way to demonstrate the authenticity of their repentance: Sincere conversion to Islam. By devoting the rest of their lives to pleasing God and abiding by Islamic rules, they could outgrow the nihilistic materialism, narcissism, and hedonism that got them (and us) into this mess in the first place.