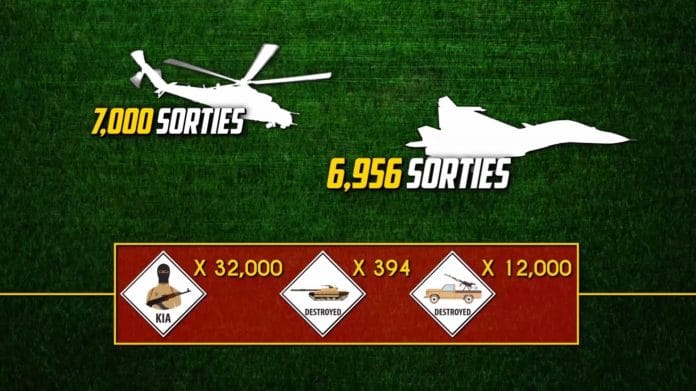 Over 1,000 localities, 78 oil and gas fields and two deposits of phosphate ores have been liberated in Syria over the past 227 days, commander of Russia’s military group in Syria Colonel-General Sergey Surovikin has told Russian President Vladimir Putin during this visit to the Khmeimim airbase on December 12. In total, the area of 67,000 square kilometers has been liberated.

Col. Gen. Surovikin added that Russian warplanes have flown 6,956 sorties and helicopters have conducted more than 7,000 sorties killing over 32,000 militants and destroying 394 battle tanks and 12,000 pieces of other equipment.

The general revealed that Russia is set to withdraw 23 warplanes of different types and 2 Ka-52 attack helicopters, the military police force, the commando unit, the field hospital and the mine-clearing center. The remaining forces will continue conducting tasks in the country.

Thus, some number of attack helicopters and warplanes will remain in the country. The Khmeimim airbase and the Tartus naval facility will remain operational. Moscow will also continue providing supplies to the Syrian Arab Army (SAA).

Meanwhile, White House Press Secretary Sarah Sanders revealed that the US is not going to pull out its forces from the country. The war on ISIS was once again named as a key reason of the continued military presence.

ISIS launched a large attack on positions of the SAA near the border city of al-Bukamal. According to pro-ISIS sources, the terrorists conducted at least one vehicle-borne improvised explosive device and killed over 20 government troops during the attack. A battle tank and a BMP vehicle of the SAA were reportedly destroyed. The situation in the area remains tense.

On December 11, a rocket was launched from the Gaza Strip on targets in southern Israel, according to the Israeli Defense Forces (IDF). The IDF said that the target of the rocket was not identified. In response, an IDF battle tank and the Israeli Air Force conducted strikes on positions of the Hamas movement in southern Gaza. This was the fourth incident between Israeli forces and Palestinian groups in the area of Gaza in the last few days.