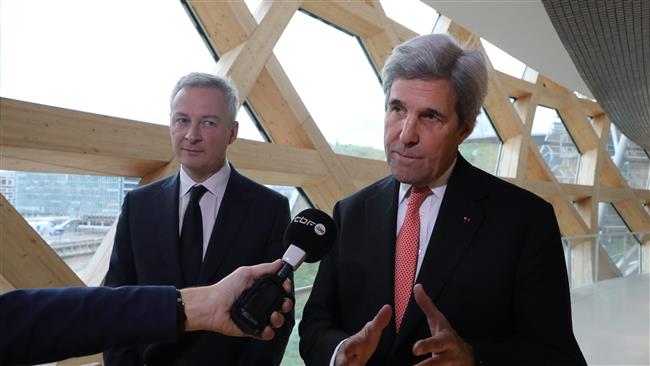 Former US secretary of state John Kerry blasted the absence of the American government at a major climate change summit in Paris Tuesday as a “disgrace”.

About 60 world leaders and hundreds of ministers, company bosses, and environmentalists gathered for the One Planet Summit called by French President Emmanuel Macron after Donald Trump’s decision to abandon the global climate accord.

Trump was not invited and the US federal government was represented by the second-highest diplomat in the American embassy in Paris, Brent Hardt, two years to the day since Kerry and then-president Barack Obama helped lead pain-staking diplomatic efforts to clinch the Paris accord.

The Paris Agreement took “26 years of work that’s being dishonored by people who don’t even understand the science,” he added.

American summit participants included the campaigning governor of California, Jerry Brown, as well as former New York mayor Michael Bloomberg who has put together a coalition of cities, companies and activists called “America’s Pledge” to help reduce US emissions.

Trump’s announcement that he will withdraw from the global pact, which the United States is the only nation to reject, has cast doubt on the viability of the deal which aims to keep global warming below two degrees Celsius (3.6 degrees Fahrenheit) over pre-industrial levels.

Asked if the United States could meet its Paris accord pledge to reduce emissions by at least 26 percent by 2025, over 2005 levels, Kerry was upbeat because of efforts at the local level.

Brown and Bloomberg both took aim at Trump’s climate stance.

“We have a climate denier in the White House who says climate change is a hoax,” Brown told a panel.

“We can’t wait for the White House to wake up. We in America are operating from the grassroots… Our work is incredibly difficult.

“We have mobilized to some extent, but we are not yet on track to reduce the rising greenhouse gases,” he added.

PressTV-White House denies US might stay in Paris accord

The Trump administration has reaffirmed its decision to pull out of a global pact to fight climate change known as the Paris Climate Agreement.

Bloomberg said the 1,700-member coalition of regional governments, cities, companies, and civil society groups that have formed America’s Pledge, represent more than half the US economy.

“If it was a country it would have the world’s third-largest economy and it continues to grow,” he said.

“Together we are going to meet the goal set by this country in Paris by reducing emissions by at least 26 percent and there isn’t anything that Washington can do to stop this,” he added.

“On the contrary, President Trump has helped rally people who understand the problem to join forces and to actually do something rather than wait for the federal government… In that sense we owe President Trump a measure of gratitude for helping us meet our goals,” he quipped.