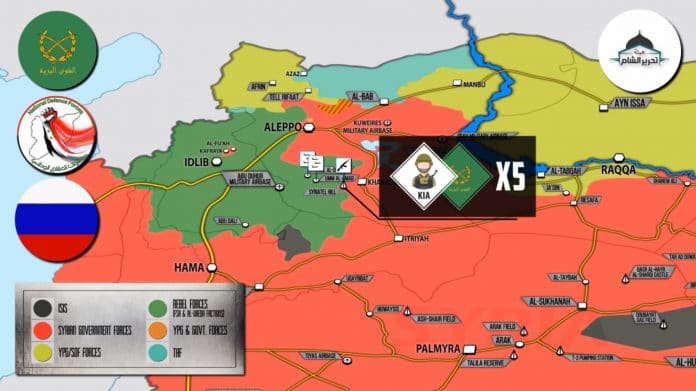 The Syrian Arab Army (SAA) and the National Defense Forces have established control over the hilltops of al-Ahmar, al-Madjahan and al-Khazzan inside the Beit Jinn pocket in southern Syria. Thus, the SAA and the NDF are about to divide the Beit Jinn pocket into two separate parts. If this is done, the liberation of Mughr al-Meer by government troops will be just a matter of time.

The SAA and the NDF resumed their military operation in the southwestern Aleppo countryside and liberated Syriatel Hill and the village of Rsm al-Kabarah from Hayat Tahrir al-Sham (formerly Jabhat al-Nusra, the Syrian branch of al-Qaeda). Government troops also advanced on Rsm Sayala and Ramlah.

According to reports, positions of Hayat Tahrir al-Sham (HTS) in Tell al-Daman and Umm al-Amad were hit by Russian airstrikes. The HTS-linked agency Iba’a claims that 5 SAA troops were killed during the clashes in Syriatel Hill.

The SAA repelled an ISIS attack north of the Yarmouk refugee camp in southern Damascus. The ISIS-linked news agency Amaq claimed that ISIS members captured a number of buildings there and killed dozens of SAA troops. However, the terrorists were not able to develop momentum and were forced to retreat after a series of clashes. Pro-government sources say only one SAA soldier was killed.

ISIS fighters allegedly captured the village of Kashma from the SAA on the western bank of the Euphrates River in the province of Deir Ezzor. Clashes continued in the villages of al-Jalaa, Saiyal, Salihiyah, Mujawdah and Abbas and al-Harsa.

The ISIS attack took place after the Syrian military had ordered the elite Tiger Forces to redeploy from Deir Ezzor to northeastern Hama and southern Aleppo for the upcoming large-scale operation against HTS. ISIS used this fact to launch own attack there.

The US-backed Syrian Democratic Forces (SDF) announced that they have captured the strategic town of Suwaydan on the eastern bank of the Euphrates River. According to the SDF, 273 ISIS members were killed during the 12-day long clashes in the area.

ISIS still poses a serious threat in Syria despite the recent collapse of its self-proclaimed Caliphate and the SAA and the SDF will have to contribute additional efforts to clear the remaining ISIS-held areas and to secure their recent gains in the eastern part of the country.