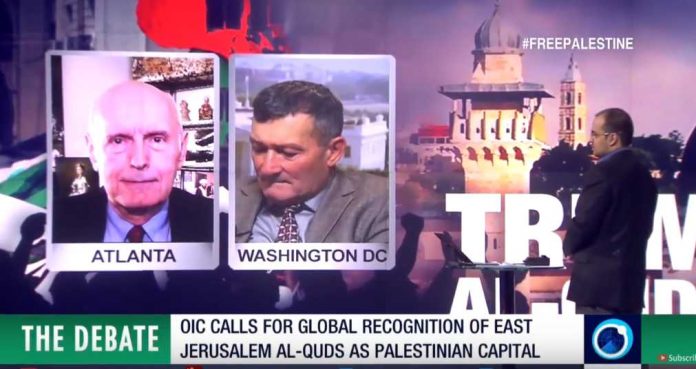 [ Note: I would like to say I was specifically chosen for this Debate Show slot with Col Fred Peterson, as it is always a joy to go head to head with the pro-Israel establishment shill who keeps looking at his crib notes when he is on screen.

But alas that did not happen. As sometimes does, the other guest was a no show and Press TV needed someone in a jiffy.

Colonel Peterson had the first part of the show while I was rushing to get set up while having to listen to his AIPAC-type propaganda, including a Zionist Mother Goose story about the history of Zionist Jews wanting to bring peace and love to the region. I got madder, and decided to crank it up a notch more than usual.

Fortunately I was on familiar ground with the Trump-Jerusalem topic, as I go way back on it to my interview 15 years ago here in Atlanta with the Latin Patriarch of Jerusalem, Michel Sabbah, a beautiful man.

He was the first non-Italian to hold the post in 500 years. I set up all the media for his visit and was first in line to do interviews, even before CNN.

I chose to use Sabbah’s briefing material on the eventual political settlement for Jerusalem along the lines of the original UN plan, to have it be an open city run by the UN, so all religious sides could be assured permanent access to their respective religious sites.

The plan was a no-brainer, as nothing else could be feasible. No one side would agree to another having control over its historic religious sites. The “open city” UN concept got airbrushed out of the history by you know who.

The UN got hustled, beginning with the assassination of the unfortunate Count Folke Bernadotte, the UN mediator, who refused to be driven around Jerusalem with an armed escort, which made him easy to be murdered. The Irgun triggerman later became Ariel Sharon’s bodyguard and driver. There is no shame among the Zionists.

I also used another hammer on Mr. Peterson, something he knew nothing about – the declassified 1948 JSC report given to Truman about Zionist intentions not only for Palestine, but for the region. Here it is:

In March, 1948, a Joint Chiefs of Staff paper on ‟Force Requirements for Palestine,‶ anticipating the termination of the British Mandate, predicted that the ‟Zionist strategy will seek to involve [the United States] in continuously widening and deepening series of operations intended to secure maximum Jewish objectives…

a) initial sovereignty over a portion of Palestine,

b) acceptance by the great powers of the right to unlimited immigration,

c) the extension of Jewish sovereignty over all of Palestine,

d) the expansion of ‟Eretz Israel‶ into Transjordan and into portions of Lebanon and Syria, and

e) the establishment of Jewish military and economic hegemony over the entire Mid East.

The JCS paper added ominously: ‟All stages of this program are equally sacred to the fanatical concepts of Jewish leaders. The program is opening admitted by same leaders, and has been privately admitted to United States officials by responsible leaders of the presently dominant Jewish group…the Jewish Agency.

Everyone I have ever used this on has just slithered away, as there really is no rebuttal. All the grunt work of those early Public TV days (Thank you Comcast) here in Atlanta afforded some material with a long shelf life, that is still of use… JD ]

Since Trump’s proclamation that al-Quds is Israel’s capital, there have been 2 polar opposite reactions. Hezbollah & Iran have promised support to & a unified strategy of resistance.

At the same time, a Bahraini delegation has visited Israel & from Saudi there’s been a muted, almost dismissive response. The U-S Jerusalem al-Quds declaration comes as some Arab countries are forging closer ties with Israel. Join me, Waqar Rizvi, as we discuss this & more tonight.