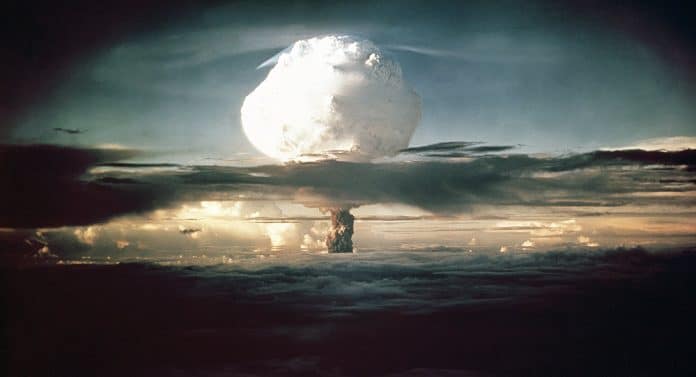 The Lawrence Livermore National Library in California has released a collection of over 60 newly declassified videos of US nuclear tests. The eerie footage highlights the frightening firepower of weapons which would have been used to annihilate the world had the Cold War ever gone hot.

The 62 videos, published on the LLNL’s official YouTube channel, show a range of tests conducted between 1945 and 1962, years when the United States, and the Soviet Union starting in 1949, started the testing of more and more powerful nuclear weapons systems.

The project, led by LLNL physicist and nuclear weapons specialist Gregg Spriggs, is looking to collect, digitize, and reanalyze some 10,000 film clips of the 210 atmospheric nuclear tests conducted by the US between 1945 and 1962.

“We’ve received a lot of demand for these videos and the public has a right to see this footage,” Spriggs said, in a press release published on the LLNL’s website. “Not only are we preserving history, but we’re getting much more consistent answers with our calculations,” the scientist added.

The new footage includes materials from US test series in the Nevada desert and in US Pacific Island territories, including Operation Dominic, Operation Hardtrack, Operation Redwing, Operation Upshot-Knothole-Ruth, and Operation Teapot. The materials include chilling, eerie and unconventional-looking nuclear explosions, with some of the tests capturing views in which the blasts are shaped like a miniature sun.

Ranging from less than a minute to 7 minutes in length, the test footage will certainly be of use to historians, documentary filmmakers, and amateur enthusiasts, but is also highly important to nuclear physicists engaged in the development of new weapons. According to Dr. Spriggs, the test footage provides an important physical record of information.

“It’s been 25 years since the last nuclear test, and computer simulations have become our virtual test ground. But those simulations are only as good as the data they’re based on. Accurate data is what enables us to ensure the stockpile remains safe, secure and effective without having to return to testing,” the physicist explained.

In other words, the footage provides an opportunity to scan and reevaluate the measurements of the yield, or amount of energy released, by each test.

Dr. Spriggs noted that the measurement tools and methodology used by physicists in the 1950s and 1960s was often off, sometimes by 20% or more. The careful study of these surviving videos with the help of computers allows for a more accurate reading to be obtained.