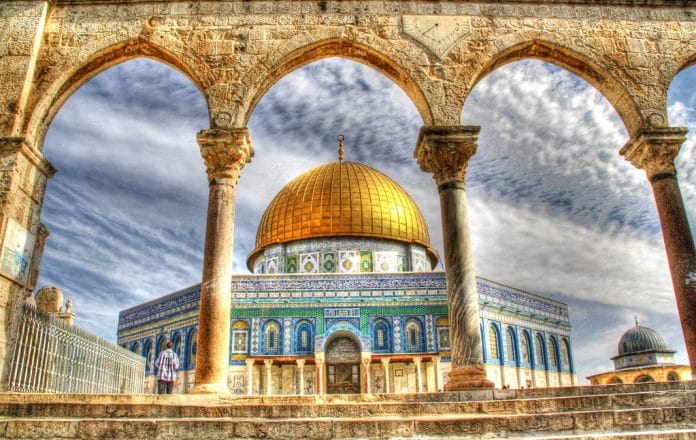 [ Editor’s Note: This is a headlines grabbing PR move by Erdogan, as I doubt the Israelis are going to issue a building permit for a Turkish East Jerusalem embassy, as that would trigger a flood of embassy requests.

But an Israeli refusal would serve the cause of angering the public in the respective Muslim countries even more, and the game seems to be at this point to generate as much hostility toward the US and Israel as possible.

Russia is being quiet on the embassy issue, as its cup runneth over in Mideast controversy; and I doubt Putin wants to be in every fight.

His focus is in winding down the Syrian war; withdrawing his forces to put the US on the spot to do the same; and getting a political process going that will lead to a climate where the rebuilding of Syria can begin with a stable political foundation.

We do not even know at this point if that will be possible, as Israel, the US, and the Saudis want to torment Syria just for spite, playing the old “it ain’t over til we say its over” last word. The US has already tipped its hand that it will stay in Syria as long as it deems necessary.

Erdogan is not the best point man to lead the embassy charge, as his history of changing sides depending on how the wind is blowing is carved in stone. If the US, Israel and the Saudis can’t be trusted, then neither can Erdogan.

But in geopolitics, you can only play the cards you have, until you get new cards. The challenge faced here is that Israel has a long history of not caring what anyone thinks, and Trump evidently drank that same koolaid, on Israeli issues anyway.

Personally I think he should resign and run for the president of Israel. I am sure they would give him citizenship if he wrote a big enough check. Plenty of Russian mobsters got theirs for $1 million, and protection from financial record subpoenas and extraditions in many cases, something Trump might need someday… JD ]

The Turkish president says Ankara will open an embassy in East Jerusalem al-Quds representing the country’s diplomatic mission in the state of Palestine.

Rejep Tayyip Erdogan said the embassy should be built soon as the Organization of Islamic Cooperation has already recognized East Jerusalem as the capital of Palestine.

He said the city is now under the Israeli occupation, expressing hope that the construction of the building could soon start. Ankara called an emergency meeting of the Organization of Islamic Cooperation days ago.

The organization’s members vehemently denounced the U-S decision to recognize Jerusalem al-Quds as Israel’s capital, calling on the Muslim world to stand up against the move unitedly.