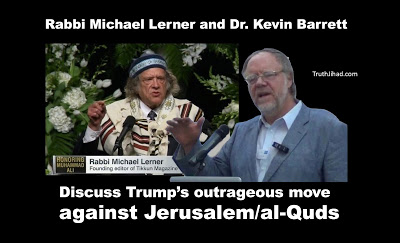 Note: Rabbi Michael Lerner has contributed to my edited books 9/11 and Empire V.2 and We Are NOT Charlie Hebdo

First 25 minutes: Rabbi Michael Lerner, America’s most celebrated progressive Rabbi, and Kevin Barrett, America’s best-known Muslim voice of 9/11 truth, get together to discuss – and argue about – the Zionist takeover of Jerusalem, and Trump’s endorsement of that crime against humanity. Dr. Barrett argues that the only way to get justice for Palestine is to expose and defeat Zionist power in the USA. Rabbi Lerner thinks that is a bad strategy, because it will be labeled “anti-Semitic.” Instead, he argues that the elusive two-state-solution will somehow arise, Phoenix-like, from its own ashes, if activists continue to deplore Israeli crimes against Palestinians while ignoring Zionist power in America. Dr. Barrett counters that the Mideastern two-state-solution is dead – there is and will always be only one Palestine – and that we need an AMERICAN intifada to force Israel to relinquish its control over the Zionist-occupied USA – a “two state solution” that would allow for a sovereign and independent America. This, Dr. Barrett believes, would solve the Occupied Palestine problem overnight.

Next 25 minutes:  “In this edition of The Debate, Press TV has interviewed Kevin Barrett, editor of Veterans Today from Madison, and Maxine Dovere, a reporter and political analyst from New York, to discuss US President Donald Trump’s move to recognize Jerusalem al-Quds as Israel’s capital while Palestinians continue to protest the decision.”

Final 10 minutes: Kevin Barrett reads a selection from the forthcoming (1/1/2018) From Yahweh to Zion by French historian Laurent Guyénot.