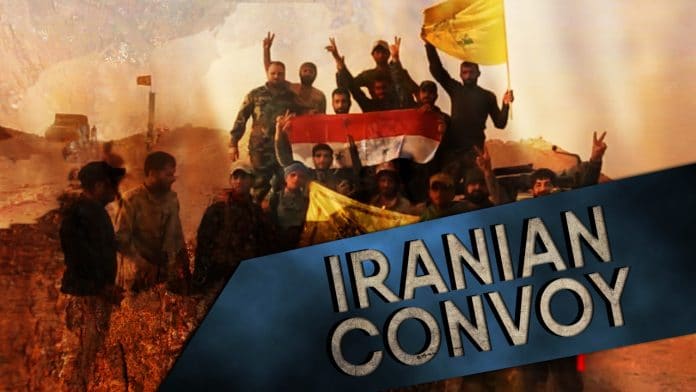 If these claims are true, this is as a huge achievement for Iran and its allies, mainly Lebanese Hezbollah. Over the last years, Iran has been shipping weapons and ammunition to the Syrian Arab Army (SAA) and Hezbollah through an air route. This allowed Israel to identify, track and target Iranian arms shipments to Hezbollah easily, as only few cargo airplanes land in Syrian airports every day. However, now, a new major land supply route is opened between Iran and its allies.

Pro-government experts claimed before that one of the main aims of the advance of US-backed forces along the Syrian-Iraqi border was to build a buffer zone between Syria and Iraq that would prevent such a route. These claims were confirmed later by former spokesman of the US-backed Syrian Democratic Forces, Tala Silo. He revealed that the main aim of the US-led coalition operation against ISIS in eastern Syria was to capture the cities of al-Mayadin and al-Bukamal. However, this plan failed.

Meanwhile, the SAA, the National Defense Forces (NDF) and Iranian-backed militias fully repelled an attack of ISIS in the Euphrates Valley and re-took all points along the al-Bukamal-Deir Ezzor highway. According to the pro-opposition Syrian Observatory for Human Rights (SOHR), ISIS lost 52 members and government forces lost 70 fighters during the clashes in the area. However, these numbers have not been confirmed by any official sources.

The SAA and the NDF have liberated the villages of Rashadiya, Rasm al-Bidh, Rasm Sayyal, Rasm Kibar, Zilaqiat, Zilen and Mashrifa from Hayat Tahrir al-Sham (formerly Jabhat al-Nusra, the Syrian branch of al-Qaeda) and its allies in southern Idlib, northern Hama and southern Aleppo.

The most intense clashes took place in Zilaqiat and Zilen where Salah Eddine Al-Checheni, a high-ranked member of al-Qaeda-affiliated Jaish al-Muhajireen wal-Ansar, was killed. Jaysh al-Izza captured six SAA fighters and an artillery piece before the retreat.

Summing up the recent developments over the province of Idlib it becomes clear that the SAA and its allies are aimed at increasing pressure on the militants in the area and they are steadily progressing in this direction.

On December 17, Jaysh al-Islam executed 45 fighters of Hay’at Tahrir al-Sham (HTS) that had been captured during previous clashes between the two armed groups in Damascus’ Eastern Ghouta, according to pro-government sources. Jaish al-Islam did not comment on these claims. However, on the same time, it appeared that HTS refused to participate in an evacuation deal that should allow its members to withdraw from the besieged Eastern Ghouta region to the province of Idlib.