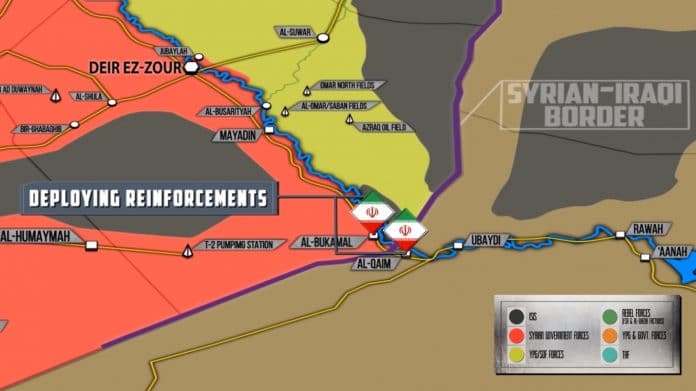 According to local sources, Hayat Tahrir al-Sham is now regrouping its forces and preparing to attack government forces in southern Idlib and southern Aleppo.

Iranian-backed forces are deploying reinforcements to the cities of al-Qaim and al-Bukamal in the Syrian-Iraqi border area, according to pro-government sources.

Experts link the growing activity of the Iranian-backed forces with the recently opened land route that links Teheran, Baghdad, Damascus and Beirut. The Al-Bukamal-Deir Ezzor part of the road is its most vulnerable segment because it borders with the ISIS-held part of the Homs-Deir Ezzor desert.

Last weekend, reports appeared that the first Iranian military convoy crossed into Syria via the recently established land route. If Iran seeks to provide supplies via the road on a regular basis, it will need additional forces to defend them while the threat of ISIS remains.

On December 18 and 19, clashes between protesters and security forces of the Iraqi Kurdistan Regional Government (KRG) left 16 protesters dead and over 90 injured, according to local sources covering the tensions. According to reports, the KRG security forces opened fire and used tear gas on the protestors after they had torched some offices of the ruling Kurdistan Democratic Party (KDP) loyal to former KRG President Massoud Barzani.

The KRG has been facing a significant pressure since the illegal independence referendum held in the KRG-held area in September. The KRG was not able to use the referendum to further its own interest. In fact, it lost a number of contested areas and then faced an additional pressure at the regional and international levels. Subsequently KRG President Barzani resigned. Now, the region is facing an internal political and economic crisis.