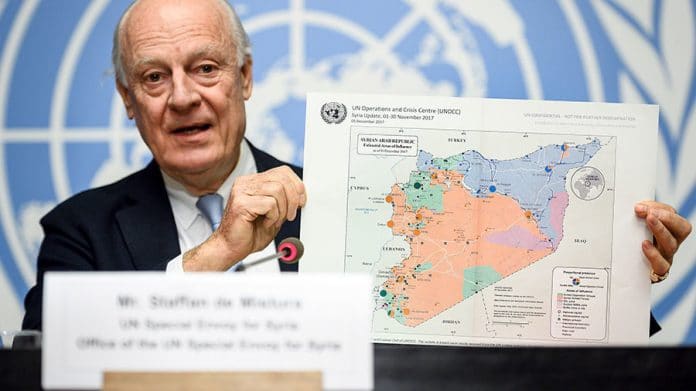 [ Editor’s Note: The UN’s Staffan de Mistura rode a dead horse all the way to the end on the Syrian peace talks because he would not throw the Saudi opposition faction out for its continued insistence that Assad must go.

The Saudis are intensely bitter that with the US might behind them they could not overthrow Assad, even after unleashing their terrorist proxies on both the Syrian and Iraqi people.

Why open supporters of terrorism would be invited to a peace process when they should be facing aiding and abetting charges is beyond the realm. Can you image if Syria demanded that the Saudi Royal Family be arrested for its long list of crimes as a pre-condition?

All that is left to do is for the Syrians to make political settlements with those opposition groups willing to do so, and move forward on a new constitution and elections. I had always said the High Negotiation Committee (HNC) and the Saudis would demand in the peace talks concessions that they could not obtain on the battlefield, and that is exactly what they have done.

For de Mistura to blame the failed talks on the Syrians should result in his removal. He allowed the HNC a free hand to do what they did and their position just hardened as ISIS was losing… Jim W. Dean ]

The ultimatum that President Bashar Assad must go if there is to be peace in Syria, drawn up by the anti-Assad opposition backed by Saudi Arabia and the West, derailed the latest peace talks in Geneva, Damascus’s envoy to the negotiations has said.

The eighth round of Syria peace negotiations in Geneva has ended in failure, after Damascus officials refused to engage in direct talks with the opposition, which continues to demand the removal of President Bashar Assad as a precondition for ending the six-year conflict.

“The Riyadh 2 Communique is a blackmail of the Geneva process,” Syrian government negotiator Bashar Ja’afari told the media, referring to a document adopted during a Syrian opposition summit in the Saudi capital last month.

As a result of the conference, attended by 140 participants and backers in the conflict, a communique was adopted insisting that the Syrian president must leave at the start of any transition period following the cessation of hostilities. The conflict has taken more than 400,000 lives.

“Those who drew up the Riyadh 2 statement were the ones who sabotaged this round. I mean by that the other side. I mean the Saudis and the Saudi handlers themselves who are the Western countries. They do not want the Geneva process to succeed.”

Ja’afari insisted that the proposal contradicted previous UN resolutions, and said that outside forces wanted to turn Syria into “another Libya or Iraq.”

Ja’afari called de Mistura’s words an “error” that could “derail his mandate as a facilitator of the talks, which will have an impact on the Geneva process altogether.”

In turn, de Mistura said that Damascus’s refusal to engage with the opposition delegation, whom it has branded both unrepresentative and envoys of “terrorists,” as “regrettable.”

“Despite a lot of effort by my whole team, day and night with all sorts of creative formula, we did not have real negotiations,” said de Mistura, who earlier suggested that Syria was on the verge of permanent fragmentation. “It is a big missed opportunity, a golden opportunity missed at the end of this year.”