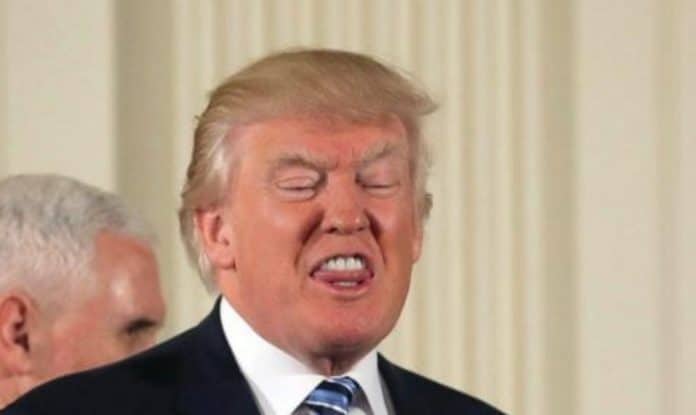 128 nations, including all the important ones like Russia, China, France, Britain and Germany, voted, as they had previously, to affirm that no such state as “Israel” with a capitol in Jerusalem exists.  By law, as exhibited in the settlement map below, there is no such nation, not until a treaty is signed. 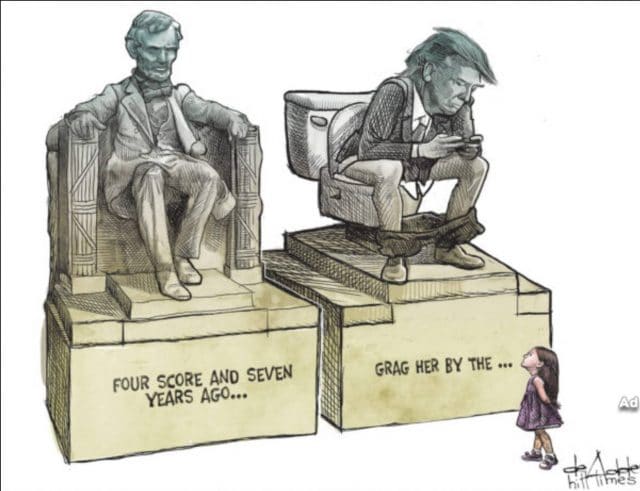 The real military state that occupies Palestine, the Jewish state, has no recognized borders, no legal constitution and no legally constituted government.  It is a tin pot dictatorship run by “Capo Netanyahu,” who works for casino boss Sheldon Adelson.

More nasty historical accuracy establishes Britain’s role in setting up two “Jewish states,” one to exist inside Palestine, not rule Palestine, and the other to rule the Arabian Peninsula under the Jewish Saud family whose Talmudic/Wahhabist extremist beliefs established al Qaeda, ISIS and work hand in hand with Israel.

This is the truth of it and saying this will label me one thing or another, in particular the worst of all “truth teller.”

Time we stopped bullshitting. Time we separated the humans from the trolls, the bought, the blackmailed and the simply inhumanly evil.  The UN General Assembly, by a massively one sided vote, rebuked Trump for his move to turn Jerusalem over to, well, let’s be truthful.

There is no such country as Israel.  The real name should be “Jewish Occupied Palestine” with Netanyahu as “Chief Capo.”   Israel is a tin pot dictatorship, a prison camp, to some extent a petty military dictatorship.  There is nothing democratic about “Israel” nor is it legally a nation, as the UN just decided.

Official treaty in the real world did this: 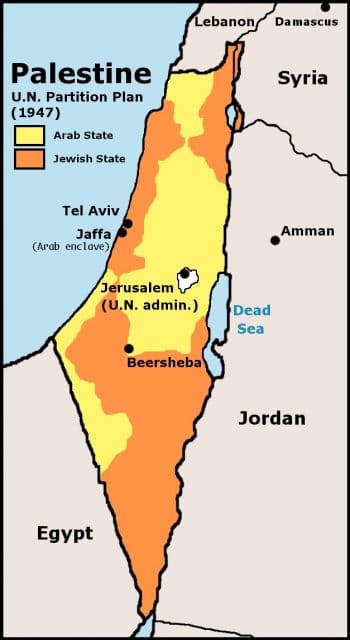 This is the real legal map of Palestine with the orange areas Jewish and the other Palestinian or Christian.

Jerusalem is the heart of world Christendom, not Islam and certainly not a Jewish religion that nobody is sure where it came from.  The “books” that describe the Red Sea parting and the Babylonian Captivity are pure and absolute bullshit, 100% fabrication.  There is no proof Jews were ever in Egypt or that anyone but the Romans built the “Wailing Wall.”

When the crusaders came to Jerualem there were no Jews there and the millions of Jews who lived across Eastern Europe were, in fact, Khazarian converts.  Jews have a history, a culture, a religion and deserve to be proud.  Simply put, what they teach their kids is utter fiction and the truth itself is just fine, good people,surviving under horrible circumstances.  They just aren’t Middle Eastern or Semitic people but rather from the Steppes or Eastern Europe, as any  idiot can quickly figure out.  Who cares anyway?  Nobody from then is alive now and those who write about such things make it all up.  Move on, get the f$%* over it!

As for Trump and his mouth, according to his promises, he and the Wicked Witch of Washington, Nikki Haley, names of those nations, representing 90% of the world’s population, that told Trump and Haley to “take a flying f$%^ at a rolling donut” need to suffer exactly what Trump promises.

Germany no longer wants Americans there.  Britain wants America to close its bases.  In fact, were truth to be told, American embassies around the world should be closed too.

The American aid Trump is withdrawing from Germany, France, Britain, Turkey and a dozen other vital US defense partners based on, well, let me explain.

Trump and Kushner are flat broke.  Vanity Fair broke the story on Kusher, that his slumlord empire was a house of cards, one huge debt underwritten by $500 million in assets now proven to belong to others.

What Kushner has been doing is going from country to country, peddling American arms and military aid and getting backhanders, or so our sources tell us, to bail out his family financial disaster.

Trump is in worse shape.  On paper he is worth billions but the secret documents held in places like Vanuatu, where he really banks, show that limited partnerships with “oligarchs” of the Kosher Nostra account for his holdings.

Trump’s own deals have been a sea of litigation where Trump has criminally defrauded investors, hundreds of times, paid off a few, and had the mob threaten those who went to the police.

This is exactly how Trump, Maxwell and Epstein got control of friends like Alan Dershowitz, a really great attorney, or Bill Clinton, Rupert Murdoch, Prince Andrew,  and over 200 members of congress.

Added to this group were folks like Scalia and Thomas, or even Justice Roberts.  The Israeli’s tried the same game on the Bush family with the Franklin Affair and tried to burn both Rumsfeld and Cheney with Chandra Levy.

For the Bush 43 administration and most around Reagan it was rent boys, some off the DC streets on private White House tours or those kidnapped from Father Flanagan’s Boys Town in Nebraska and brought into DC by the American Israeli Public Affairs Committee and Anti-Defamation League, or so sources tell us.

In the interim, our kids should be coming home from Naples and Aviano, from Crete and Diego Garcia, from Qatar and Turkey, hundreds of thousands of them that Trump has promised to bring home to save money, unless of course the asshole is lying.