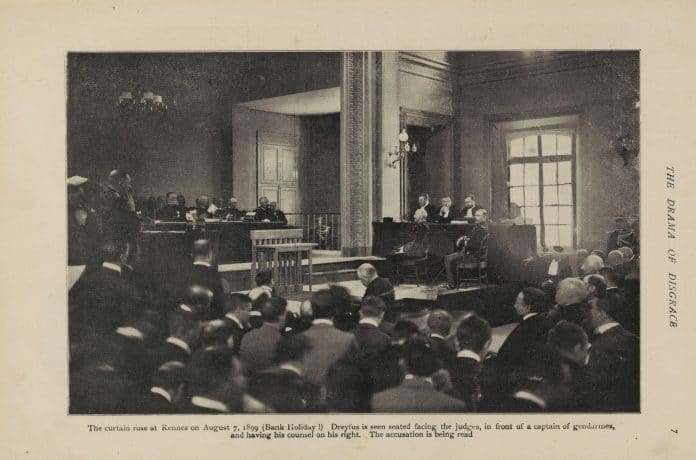 On this 22nd day of December in 1894, French officer Alfred Dreyfus is convicted of treason by a military court-martial and sentenced to life in prison for his alleged crime of passing military secrets to the Germans.

The Dreyfus case demonstrated the anti-Semitism permeating France’s military and, because many praised the ruling, in France in general. Interest in the case lapsed until 1896, when evidence was disclosed that implicated French Major Ferdinand Esterhazy as the guilty party.

The army attempted to suppress this information, but a national uproar ensued, and the military had no choice but to put Esterhazy on trial. A court-martial was held in January 1898, and Esterhazy was acquitted within an hour.

In response, the French novelist Émile Zola published an open letter entitled “J’Accuse” on the front page of the Aurore, which accused the judges of being under the thumb of the military. By the evening, 200,000 copies had been sold.

One month later, Zola was sentenced to jail for libel but managed to escape to England. Meanwhile, out of the scandal a perilous national division was born, in which nationalists and members of the Catholic Church supported the military, while republicans, socialists, and advocates of religious freedom lined up to defend Dreyfus.

In 1898, Major Hubert Henry, discoverer of the original letter attributed to Dreyfus, admitted that he had forged much of the evidence against Dreyfus and then Henry committed suicide. Soon afterward, Esterhazy fled the country. The military was forced to order a new court-martial for Dreyfus.

In 1899, he was found guilty in another show trial and sentenced to 10 years in prison. However, a new French administration pardoned him, and in 1906 the supreme court of appeals overturned his conviction. The debacle of the Dreyfus affair brought about greater liberalization in France, a reduction in the power of the military, and a formal separation of church and state.

Other Notable Events on This Day in History