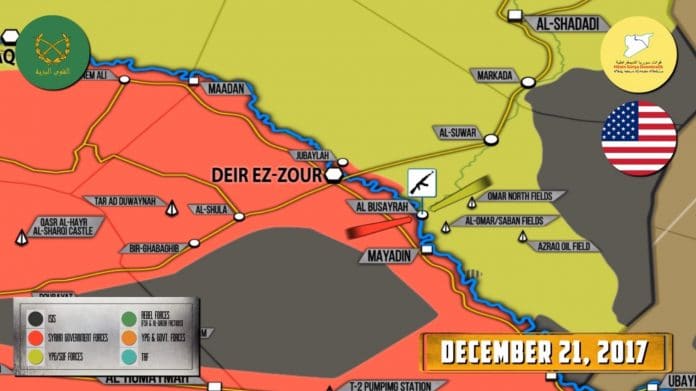 The Syrian Arab Army (SAA) has shelled several positions of the US-backed Syrian Democratic Forces (SDF) in the town of al-Busayrah on the eastern bank of the Euphrates River in southern Deir Ezzor, the Kurdish Hawar News Agency (ANHA) reported on December 21. Other pro-Kurdish sources claimed that the SAA is coordinating its alleged attacks on the SDF with ISIS.

In turn, pro-government sources accused the SDF of attacking the SAA in the village of Khasham on December 20 and 21. The SDF’s Deir Ezzor Military Council allegedly lost 20 members in these attacks.

While local sources cannot confirm any notable skirmishes between the sides, the recent competing accusations are an indication of the deterioration of relations between the Damascus government and the SDF. This became especially noticeable after Washington had assured the SDF leadership that US forces will not withdraw from Syria despite the collapse of ISIS’ self-proclaimed Caliphate.

The Syrian military is deploying reinforcements to northern Hama and the area of Khanasir ahead of the widely-expected large-scale operation against Hayat Tahrir al-Sham (formerly Jabhat al-Nusra, the Syrian branch of al-Qaeda) in the province of Idlib, according to pro-government sources.

Meanwhile, clashes erupted between the SAA and Hayat Tahrir al-Sham (HTS) south of the HTS-held village of Mushayrifat in northeastern Hama. However, pro-government forces were not able to overrun the HTS defense there.

On December 18, a Free Syrian Army (FSA) commander revealed to the Syrian opposition news outlet Enab Baladi that the US had fully suspended its support for all FSA groups in northern and southern Syria. FSA groups were allegedly informed of the US decision during a joint meeting.

According to the Enab Baladi report, the US even closed its infamous Military Operation Center (MOC) in Jordan. The MOC is known for providing financial, military and intelligence support for the FSA and radical Islamist groups in southern Syria. The US also shut down another Military Operation Center in Turkey, named by Turks “MOM”, according to the FSA commander. The MOM provided support to militant groups in northern Syria.

If the report is confirmed, this will indicate that Washington is going to focus further on supporting the SDF and its separatist intensions in northeastern Syria.