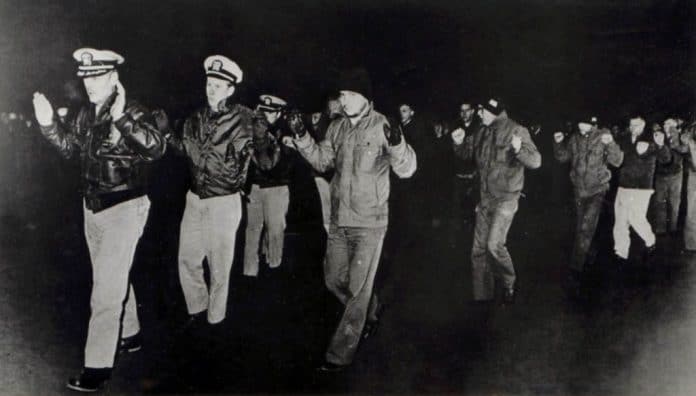 The crew and captain of the U.S. intelligence gathering ship Pueblo are released after 11 months imprisonment by the government of North Korea.

The seizure infuriated U.S. President Lyndon Johnson. Later, he claimed that he strongly suspected (although it could not be proven) that the incident with the Pueblo, coming just a few days before the communist Tet Offensive in South Vietnam, was a coordinated diversion. At the time, however, Johnson did little.

The Tet Offensive, which began just a week after the ship was taken by North Korea, exploded on the front pages and televisions of America and seemed to paralyze the Johnson administration.

To deal with the Pueblo incident, the United States urged the U.N.’s Security Council to condemn the action and pressured the Soviet Union to negotiate with the North Koreans for the ship’s release.

It was 11 long months before the Pueblo‘s men were freed. Both captain and crew were horribly treated and later recounted their torture at the hands of the North Koreans. With no help in sight, Captain Lloyd Bucher reluctantly signed a document confessing that the ship was spying on North Korea.

With this propaganda victory in hand, the North Koreans released the prisoners and also returned the body of one crewman who died in captivity.

Some Americans criticized Johnson for not taking decisive retaliatory action against North Korea; others argued that he should have used every diplomatic means at his disposal to secure a quick release for the crew.

In any case, the event was another blow to Johnson and America’s Cold War foreign policy.

Other Notable Events on This Day in History