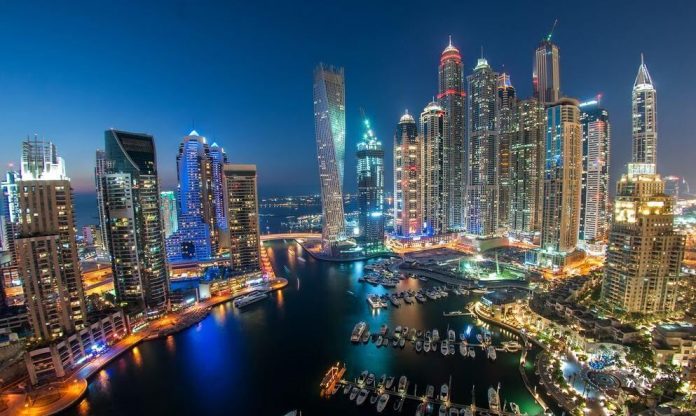 [ Editor’s Note: I have not been to Dubai in some time, over ten years ago, when the skyline was a sea of high rise construction cranes and islands being built off the coast to literally manufacture huge waterfront development projects.

It was the boom days then, to be followed by the usual crash, which also passes. My first reaction was having arrived onto a huge movie set, and even a bit like landing on another planet, as some of the architecture completed and going up was not of this world.

I was there for a lecture series and some briefings, somewhat rained on by coming down with a horrible flu on the flight over that had me in bed for half the week at my poor hostess’s accommodation, an American heiress who had spotted and liked my Heritage TV work.

You could smell the wealth there, and see the “gap” disparity where imported laborers worked in modern slavery-like conditions in semi-prison camps out in the desert, bused into town to work long days and then back to their camps. Third worlders stood in line for these jobs.

The flip side of that was the big money to be made for people with “special talents”. They were there in droves, a UN rainbow of ex-pat, on-the-make contractors and big name established companies looking to get in on the land rush. Some VT people were also in and out during that time.

This “starting a CIA” for the Emirates story is a bit funny, as it has already been going on for years. A starting-from-scratch operation is not needed when you can buy one that is already in place, and get seasoned people versus green rookies who are virtually useless.

But the comment in the article below caught my eye about the “fabulous money” available for anything related to defense and security, where pay and living conditions would far surpass what could be made elsewhere, plus having a chance to live in fantasyland, a modern Arabian Nights.

The article focus, of feigned concern about “oversight” over who highly trained ex-US Intel and military contractors are working for was the big laugh. Since Bush and Cheney opened those flood gates, it has been a land rush, not only for the huge money going out, firehouse style, but the lack of oversight.

Huge sums of debt-funded pork projects disappeared into the many pockets of people who seemed to be standing in line and all set to go when the 9-11 bell was run. This included Mr. Chertoff, who made sure the operation got jump-started well, and then resigned to dive in himself and has pretty much remained off the public radar since then, the usual modus operandi for uber-operatives.

Congress never showed any concern, with its members distracted in grabbing all the DHS money for their own districts that was also being firehosed out, as if the invasion by aliens was right around the corner.

The FBI was left to running manufactured sting operations to insure their operational funding would remain high, a stain not only on them but the Justice Department that also went along with the hoax where profiled and targeted dupes were baited into “terror” operations run by government agents.

The United Arab Emirates has hired former CIA agents to teach Emirati recruits “the tools of modern spycraft,” as part of efforts to establish a professional intelligence service, according to a report.

The training sessions are taking place at two locations in Abu Dhabi – in a typical modern villa not far from the northeastern Zayed Port, and at another site outside downtown called “The Academy,” which is equipped with gun ranges, barracks, and driving courses, the Foreign Policymagazine reported.

The trainees learn a range of skills from the basics of intelligence like working in surveillance teams to creating cover identities and how to groom and recruit intelligence assets.

The key figure behind the intelligence training operation is Larry Sanchez, a veteran of the CIA clandestine services who has been assisting the crown prince of Abu Dhabi to build Emirati intelligence for the past six years, FP said, citing multiple sources.

Sanchez is the same former intelligence officer who helped launch a controversial partnership between the CIA and the New York Police Department to monitor Muslims in New York.

But Sanchez is just one of many security professionals who have traveled to the UAE to provide intelligence and security training. They said they were drawn to the Persian Gulf country by the promise of interesting work and good pay.

The UAE’s reliance on Westerners to build its security and intelligence apparatus is not new, but details of that assistance have always been kept a secret.

Sanchez’s role in the UAE’s intelligence operation indicates just how far private contractors are willing to go in selling skills acquired from decades of working for the US military and intelligence agencies.

This has raised legal questions in the US as Washington struggles to decide how to govern former intelligence officials looking for lucrative careers aboard.

DarkMatter, the government-affiliated UAE company involved in managing the intelligence contract, is currently under investigation by the FBI.

Former US government employees said they believed that having private contractors create a foreign intelligence service was quite unprecedented. “The dream,” one source told the FP, was to help the UAE create “its own CIA.”