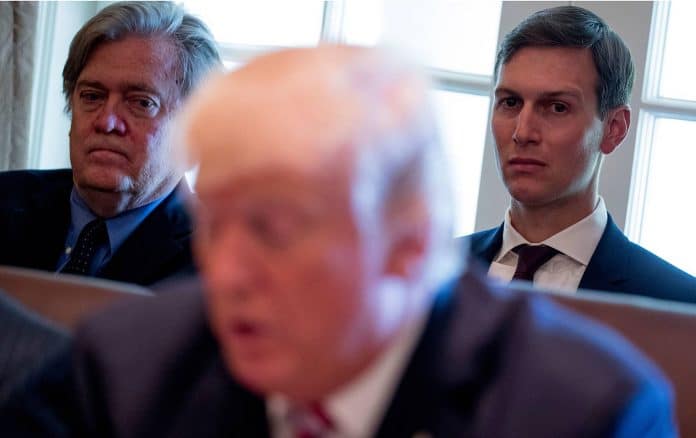 Steve Bannon blasts Jared Kushner, Ivanka Trump as everything wrong with the White House – on Huffington Post, via AOL

[ Editor’s Note: Well it looks like Trump got an early Christmas gift from Bannon via Vanity Fair special delivery. Some of it is old news, but it is not a small thing to have the ultimate Trump campaign insider point out how our make-believe president Trump thinks his kids can instantly be qualified as “senior advisers”, simply on his say so.

It is beginning to blow up in his face. Congress, especially the Republicans, have been quiet about the White House nepotism on steroids, as they have enough Trump problems on their hands as it is, like having to pray every night that he does not tweet something totally childish the next morning.

Even though Kushner is cooperating on Russiagate in the FBI probe, don’t be surprised if we later learn that it has been building a separate case on him for influence-pedaling. The FBI has always played soft shoe on that subject, but Trump has been taking it to an incredible new level. I suspect that more than a few in the FBI and Justice department feel they will look bad if they just let it go by.

How possible, even probable, do you think it could be that Kushner is trying to save the families’ bankrupt business on back-end deals with the Saudis, on things like arms sales, or helping out the Likuds in Israel, etc., so that even if Trump only lasts four years, both families will be set for life?

What kind of favor would a deep pocket be willing to do to set up some assistance for them? Could such a favor include continuing, even escalating, the Iranian bogeyman hype?

And ask yourself how many people who might want to feed the FBI such material did they have on this, including people in the CIA and intercept business, even those monitoring Bibi’s dealings with the Trump “family”, doing so on national security grounds.

Such agencies cannot do anything directly themselves, but they are not helpless when it comes to leaving a bread crumb trail for others to follow.

With Trump’s polls declining even within his base, if this holds, he will be a dead man walking at the midterms politically, and maybe even criminally. Those elections are going to be a battleground for an issue that is not really being discussed.

The Dems might win a lot of independent and even Republican crossover support to put Congress in a better position for impeachment, which will never happen with the Repubs in the majority. If you add in Trump’s disaffected base, it might be enough to tip the scales… Jim W. Dean ]

Former White House chief strategist Steve Bannon has attacked President Donald Trump’s daughter Ivanka and her husband Jared Kushner as the “railhead of all bad decisions” in the White House.

Bannon picked apart the problems of the White House and derided the couple as “Javanka” in a wide-ranging interview with Vanity Fair published Thursday. He said Ivanka was a “fount of bad advice during the campaign,” and claimed he once called her to her face “the queen of leaks.”

Vanity Fair also reported Bannon considers Kushner an elitist with no political experience who is in over his head and is out of touch with Trump’s constituency.

“He doesn’t know anything about the hobbits or the deplorables,” Bannon said. “The railhead of all bad decisions is the same railhead: Javanka.”

He said it was Kushner who encouraged Trump to fire FBI director James Comey.

Bannon didn’t exactly gush about his old boss, either.

“The Trump presidency that we fought for, and won, is over,” he told writer Gabriel Sherman, and reportedly told a friend last month that he believes the president has “lost a step.” He joked to Vanity Fair that Trump is “like an 11-year-old child.”

Bannon has reportedly said in private conversations that he believes Trump only has a 30 percent chance of finishing his term because he may be impeached or removed from office under the 25th Amendment.

Bannon doesn’t let himself off easy, either.

“I realize in hindsight I was just a staffer, and I’m not a good staffer,” he said. “I had influence, I had a lot of influence, but just influence.”

Now, outside of the White House and back at Breitbart, Bannon said, he feels more powerful.

“I have power. I can actually drive things in a certain direction,” he said.

This article originally appeared on HuffPost.