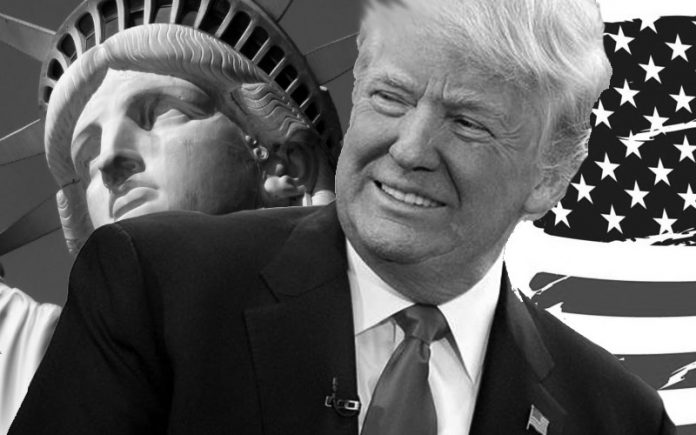 During his national security speech last Monday, December 18th Trump introduced his administration’s new “America First” national security strategy in a surprisingly unaccustomed calm and calculated mannerism that is uncharacteristic of him. Although it seemed that he was well coached, yet, he couldn’t escape his narcissistic tendency and kept denunciating previous administrations while praising his own.

Trump accused the previous administrations of failing the American people by building the economy of foreign countries rather than the American economy. He accused the Trans Pacific Partnership as a “job killing deal” and the Paris Climate Accord of being expensive and unfair. Trump promised to withdraw America from both.

On the other hand, he praised his efforts, during his first trip abroad to the Middle East, to convince the Gulf States (the real supporters of ISIS) and other Muslim majority states to join together to fight radical Islamic ideology and terrorism.

He blamed Obama’s administration for signing nuclear agreement with Iran calling it a bad deal. Then accuses Iran of terrorism throughout the Middle East when Iran has been fighting the American created and armed ISIS terrorist groups for the last seven years. He boasted that he imposed an ineffective and meaningless sanctions against the Islamic Revolutionary Guard Corp, and of declining to certify Iran deal to Congress. Trump ignores the fact that his administration is arming and supporting Saudi Arabia’s aggression against Yemen creating the worst humanitarian crisis in the recent history.

Trump accused previous administrations of tolerating North Korean regime allowing it to develop its missile system. He accused North Korea of threatening the US and the world, coerced its neighboring countries to join him in imposing economic sanctions, and sent carrier ships to threaten North Korea of nuclear attack and utter destruction. He in fact used North Korea’s deterrent missile system to spread fear in the hearts of the neighboring countries in order to sell them more American weapons.

After tooting his first year achievements, Trump focused on his national security strategy stating that it advances four national interests; at times called them pillars. The first is the protection of the American people, the homeland and the American way of life. He talked about the need to secure American borders in order to secure the American nation.

So, he again called for the construction of a wall on the southern border, many parts of which had been built by previous administrations. This is an Israeli concept to separate “them” from “us”. He explained that this strategy is to enhance ICE (Immigration and Custom Enhancement) officers and homeland security personnel to stop Latinos, whom he previously called criminals, drug dealers, rapists and thieves.

This step also calls for confronting, discrediting and defeating what he called radical Islamic terrorism and ideology and preventing it from spreading into the US. Trump is spreading Islamophobia and is banning Muslims from five countries in this regard. A new vetting procedure has been implemented to keep Muslims out, and the vetting is getting tougher every month.

The strategy also calls for developing new ways to counter the use of cyber and social media to attack and threaten Americans. This is meant to destroy net neutrality, to enhance surveillance, to target internet users with brainwashing fake news, and to perpetrate more cyber attacks as was done against Iranian nuclear centrifuges (Stuxnet virus).

This interest (pillar) aims at building a police state, divide the people, spread Islamophobia and hatred, increase surveillance, and killing net neutrality. By protecting the people and the American way of life Trump means protecting the richest 1% and their exploiting ways of life and separating them from the poor working class.

Trump’s second strategic pillar is the promotion of American economic prosperity that he recognizes as national security. Trump sees home economic growth as an absolute necessity for American power and influence abroad. “Any nation that trades away prosperity for security ends up losing both” Trump explained.

So, his strategy calls for cutting taxes, rolling back unnecessary regulations against corporations, renegotiate/cancel trade agreements, and use firm actions against “unfair practice and intellectual property theft.” The strategy proposes a complete rebuilding of American infrastructure, and embraces a future American energy dominance and self-sufficiency.

The strategy, here, serves only the rich and the corporations, including, of course, Trump’s corporations, by cutting their taxes and rolling back regulations that were previously enforced to serve and to protect the consumers and the environment.

Trump has already signed a tax bill reducing the corporate tax from 35% to 21% while the working class gets only crumbs. With the complete rebuilding of the infrastructure and huge military expenditure Trump is proposing there will be a definite huge budget deficit, that would require cuts in the infrastructure building (Puerto Rico Island in mind), reduction in social security benefits, and reduction in medicare and social services.

When talking about trade fairness and reciprocity Trump is alluding to renegotiating more aggressive trade agreements and imposing economic boycott or aggressive measures against those countries, who don’t play according to his rules. Deregulations would allow the opening of federal land for mining and oil excavations. The future American energy dominance and self-sufficiency are hints to allowing more oil fracking and running more oil pipe lines.

The third pillar of Trump’s strategy recognizes that “weakness is the surest path to conflict and our rivaled power is the surest mean of defense”, and “a nation that is not prepared to win a war is a nation not capable of preventing a war.” Trump calls for “peace through strength”. He calls for the reversal of what he accuses previous administrations’ decisions to shrink the armed forces even as threats to national security grew. His strategy calls for massive building up of the military by breaking from what he called the damaging defense sequester, and calls for streamlining acquisition to eliminate bloated bureaucracy.

Trump proposed the investment of $700 billion in defense next year praising, here, the “fundamental side benefit of creating millions and millions of jobs”, yet neglecting the side-harm of war, killings and destruction. Trump’s strategy recognizes space as a “competitive domain” and calls for multi-layered missile defense; a very dangerous call that will initiate space arms race and eventual star wars.

Trump’s strategy recognizes “a new era of competition … in vigorous military and economic and political contest” and his administration is in this competition to win the contest. His peace through strength is actually the process of bullying, intimidating, coercing, and subjugating other nations to the whims of the American president (dictator) under the threats of military destruction and annihilation.

Let us not ignore Nikki Haley’s threat to North Korea in the United Nation: “if war comes, make no mistake, the North Korean regime will be utterly destroyed.” I don’t know what peace Trump was talking about when the US had destroyed in whole or part many countries around the world and had overthrown democratic governments and supported dictatorial regimes.

Under the justification of building a credible military deterrence Trump called for significant investment to maintain American nuclear arsenal and infrastructure capable of being deployed abroad. He is not satisfied with the almost 200 nuclear bombs stationed in different European countries. He does not see these as threat to world peace while considering North Korean missile and the non-existent Iranian nuclear weapons as the real threat to world peace. What a myopic vision!

Trump’s fourth strategic pillar is advancing American influence in the world by building partnerships based on cooperation and reciprocity with those who share American goals. Trump claimed that the US does not seek to impose the American ways of life on any one, but will champion these values without apology. Although his strategy will pursue a vision of strong, sovereign and independent nations that respect their citizens and respect their neighbors, it will not allow inflexible ideology to become an obsolete and obstacle to peace.

Trump seems to have forgotten that the US had destroyed many independent sovereign countries in order to spread its version of democracy. Last week his ambassador to the UN; Nikki Haley, had threatened member countries , virtually the whole world, not to vote for Jerusalem proposal, warning them that their vote will be remembered, their names will be taken and handed to Trump, who will consider this as a personal matter, and will cut US financial aid to these members. If this is not imposing one’s opinion, then what is?

“America first” and “peace through strength” are means for Trump’s administration to control and suppress American people through police state under the guise of national security, and to control foreign countries through nuclear military intimidation and bullying. It is the US that is threatening world peace not Iran or North Korea.

Trump had ridiculously attempted to conclude his speech by portraying an optimistic future vision of Americans returning to the wisdom of their founders forgetting that the founders’ so-called wisdom was based on genocide of indigenous people, on slavery and on racism. I could not stop myself from laughing when he concluded with “In America the people govern, the people rule, and the people are sovereign.” He must have been talking about the 1% elite.