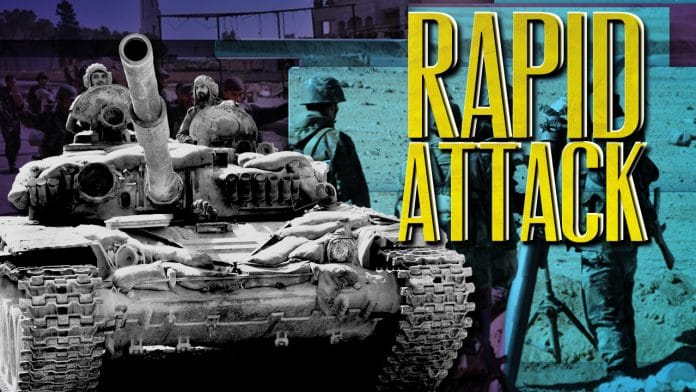 The Syrian Arab Army (SAA) and the National Defense Forces have established control over Hankarat and cut off the road between the militant-held towns of Mughr al-Mir and Beit Jinn in southern Syria. Government troops also entered Mughr al-Mir and captured a part of the town.

According to pro-government sources, Hayat Tahrir al-Sham (formerly Jabhat al-Nusra, the Syrian branch of al-Qaeda) lost about 12 members in the recent clashes. A field commander named Abu Hatem Qatana was one of them.

According to reports, the sides are now negotiating an agreement that will allow the militants to abandon the pocket and to flee to the province of Idlib.

Hayat Tahrir al-Sham and its allies also faced an additional pressure in northeastern Hama and southern Idlib. According to the recently appeared video, the SAA uses at least one Russian-made TOS-1A heavy flamethrower system to destroy the militant positions there.

The deployment of the TOS-1A confirms that the SAA really prepares for further operations against Hayat Tahrir al-Sham in the area.

Turkey and Russia are working to evacuate 500 people including 170 children and women from the militant-held region of Eastern Ghouta, located near the Syrian capital, according to Turkish President Recep Tayyip Erdogan.

The Turkish president said he had discussed the issue with Vladimir Putin. According to Erdogan, Turkey seeks to bring people in need of assistance to Turkey to provide treatment and care.

A notable part of Eastern Ghouta is controlled by various militant groups, most notably Jaish al-Islam, the Al-Rahman Corps, Ahrar al-Sham and Hayat Tahrir al-Sham. These militant groups actively use civilians as human shield to prevent Syrian Army advances in this urban area.