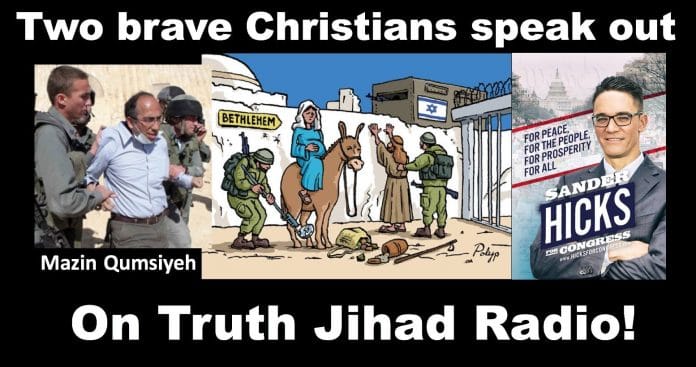 Two of Truth Jihad Radio’s favorite Christians – Palestinian-American professor Mazin Qumsiyeh and New York congressional candidate Sander Hicks – follow in the footsteps of Jesus and all the prophets (peace upon them) by standing courageously for truth and justice.

First 20 minutes: Professor Mazin Qumsiyehteaches science at Bethlehem University, where he is a witness to the Zionist theft of Christmas. In this interview we discuss the ongoing protests over Trump’s Jerusalem fiasco, as well as the recent atrocities by the Israeli army, as described by Richard Silverstein:

Israeli soldiers invaded the village of Nabi Saleh (actually, they invaded her back yard, after shooting her cousin in the face! -KB) and were met with the angry protests of a 16-year-old Palestinian girl, Ahed al Tamimi. When the soldiers touched her, she fought back. She screamed at them not to touch her, and then she hit them with her hand and kicked them with her foot…Israeli “education” minister Naftali Bennett said that little Ahed should be sent to prison for life. Michael Oren the “esteemed” professor of Jewish history, said that Ahed’s family was “not a real family.”…Earlier yesterday at 4 AM., Israeli troops invaded her village and assaulted her home. They snatched her from her family, handcuffed her, and hustled her away into a waiting vehicle where she was manhandled. (Several days later, as of this posting, she has not been released.)

The second bad day for the IDF was during the Gaza protests against the Jerusalem declaration, when Gazans approached the fence with Israel waving Palestinian flags. Among the demonstrators was Ibrahim Abu Thurayyah. He was a double-amputee who lost his legs in a 2008 Israeli missile attack. Despite his disability, he insisted at being in the front lines of every protest, including the one that day. There he was in a wheelchair waving his flag. Just then, an Israeli sniper bullet tore through his brain, killing him instantly. A clean shot, a good kill. The authorities, who always investigate these incidents to ensure they’re kosher, found the killer operated within organization ethical guidelines. 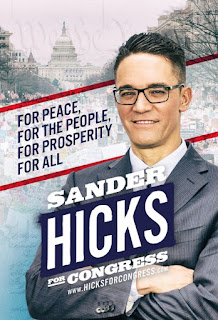 Final 40 minutes: Sander Hicks discusses his run for Congress. Unlike most candidates he is actually talking about important issues!