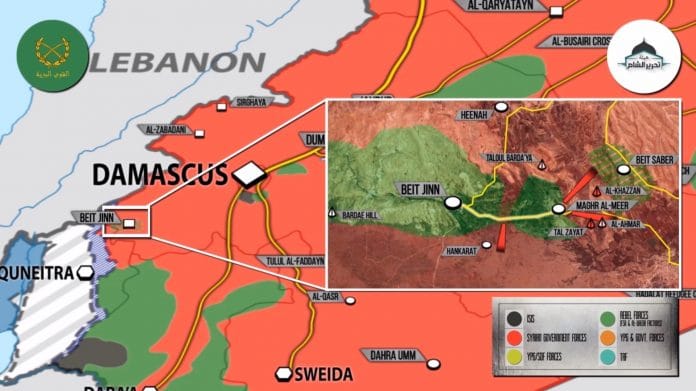 The Syrian Arab Army (SAA) achieved another strategic victory in the countryside of Damascus, according to pro-government sources.

Units of Hayat Tahrir al-Sham (formerly Jabhat al-Nusra, the Syrian branch of al-Qaeda) and other armed groups operating in the Beit Jinn pocket reportedly accepted a withdrawal agreement and declared their readiness to surrender their positions to the SAA.

Negotiations between the local militants and the SAA started in the pocket last week after government forces had entered Maghar al-Mir, secured the nearby hills and cut off the road between Beit Jinn and Maghar al-Mir.

With the implementation of the surrender agreement, the Syrian military will eliminate one of the few remaining militant-held pockets in the Damascus countryside and secure this important area near the Golan Heights.

Israeli media as well as pro-opposition sources already started a propaganda campaign arguing that Iranian-backed forces are going to use this area to threaten Israel.

In 2016 and 2017, government forces were able to secure large areas in Western and Eastern Ghouta and free up a significant number of troops that had been involved in the operations there. This fact as well as the improved security of the Syrian capital was an important factor contributing to SAA successes on other frontlines.

Meanwhile, sporadic clashes continued between the SAA and Hayat Tahrir al-Sham in northern Hama and southern Aleppo. According to local sources, government forces are now focused on conducting artillery and air strikes on the militants’ positions preparing for the upcoming advance that will reportedly start after the full liberation of Beit Jinn.