[ Editor’s note: VT earlier reported on advanced GRAD rockets with range up to 100km being upgraded at a US supervised facility in Bulgaria by Radeon Corporation for use by al Qaeda against Russian Forces in Syria and later as terror weapons against Damascus as the Syrian War converts to a pure terror only conflict.

These weapons had been tested several times in the past before being intercepted by a Russian Pantir SI syustem at Russians Khmeimim Airbase on December 27, 2018. This is further evidence of the Trump administrations ties to both Saudi Arabia and al Qaeda… Gordon ]

On December 27, government troops entered the village of Mughr al-Mir in the Beit Jinn pocket in southern Syria. According to pro-government sources, militants had withdrawn from the village under the agreement previously reached with the Syrian Arab Army (SAA). 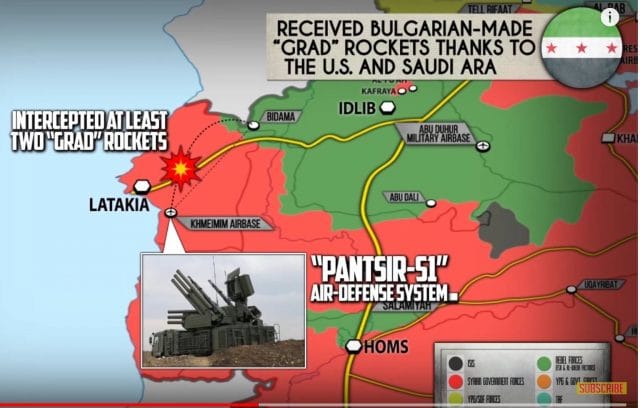 The first stage of the withdrawal agreement should start on December 28. If it fails, the fighting will likely continue in the pocket.

The SAA and its allies liberated Umm Haratayn and Tell Tawila from HTS and its allies in southern idlib. Meanwhile, Syrian and Russian warplanes carried out airstrikes on HTS positions near the villages of Umm Haratayn, Msheirfeh and Hamadaniyeh. At least 9 members of HTS’ ally, Jaysh al-Izza, were killed in the recent clashes.

On December 27, a Pantsir-S1 short-range air-defense system deployed at Russia’s Khmeimim airbase successfully intercepted at least two Grad rockets launched from the area of Bidama by members of the FSA. The FSA had received Bulgarian-made Grad rockets thanks to the US and Saudi Arabia.

Some pro-government media outlets and blogs reported that the SAA is going to launch an operation against ISIS in the Yarmouk refugee camp south of Damascus soon. However, these are unlikely until the Syrian military has not finished its operation in the area of Beit Jinn. Thus, the possible operation in Yarmouk will take place in 2018.

On December 27, UK Army Major General Felix Gedney, deputy commander of strategy and support in the US-led coalition, announced during a press briefing that the coalition will not conduct operations in the areas held by the Damascus government. Maj. Gen. Gedney also accused the SAA of allowing ISIS fighters to move through its areas north of the US-led coalition base in al-Tanaf, near the Syrian-Iraqi border.

The US-led coalition is not going to reduce significantly its military presence in the areas controlled by US-backed forces. In turn, it will use the area of at-Tanf as well as the area controlled by the Syrian Democratic Forces as a foothold to influence the situation in Syria in 2018.