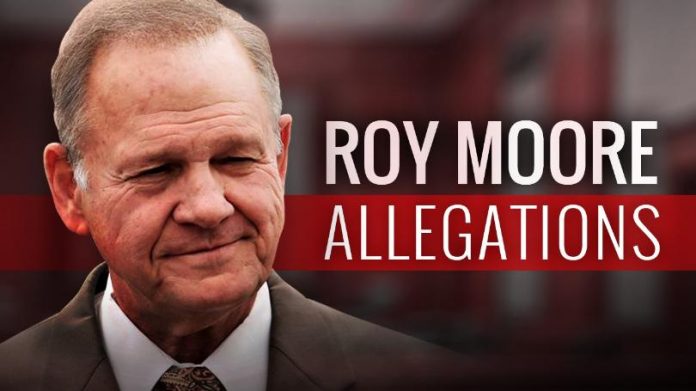 [ Note: I am waiting for the backstory to come out on this Ron Moore story, one I suspect will show that his eye for young girls had been known for some time, but saved to use at a critical time.

Why do I fee this way? It’s because once these guys do this stuff and get away with it they keep doing it as they climb into more powerful positions, thinking that his layering the up from anyone taking a shot at him. He can just deny it.

And then there is “the who”. That would be Democrat opposition research people of course. Judge Moore had solid backing in Alabama and they knew they would have to get the planets aligned correctly along with the timing.

Alabama women turned out to be the key, and then there was the black vote came out in bigger numbers for a special election than before, with the churches playing a key role. You can be sure that this coup will be studied closely for the potential to duplicate it elsewhere.

Trump’s agenda is up in the air with this almost a tie in the Senate, where two crossover votes can block the Republicans from ramming stuff through without taking Democratic concerns into the equation.

The Dems are being cranked up for the midterms knowing whatever changes that happen then could determine if Trump remains in 2020. Many feel there is an “anti-Trump vein of gold” out there to mine, which the Trumpmeister himself will reveal through his endless tweets. If the Repubs were to take a beating in 2018, they might take Trump out themselves …JD ]

Democrat Doug Jones has officially been declared the winner of the US Senate race in the southern state of Alabama, whittling down the slim Republican majority in the chamber. Alabama Secretary of State John Merrill certified the results of the December 12 special election.

Merrill dismissed claims of voter fraud by the campaign of defeated Republican candidate, Roy Moore. With Jones’ victory in a Republican bastion, the party of President Trump now holds 51 seats in the Senate and the Democrats 49 which is the slimmest of majorities.

The Alabama result dealt a stinging blow to Trump, who had thrown his support behind Moore, a conservative Christian embroiled in sexual misconduct scandals.