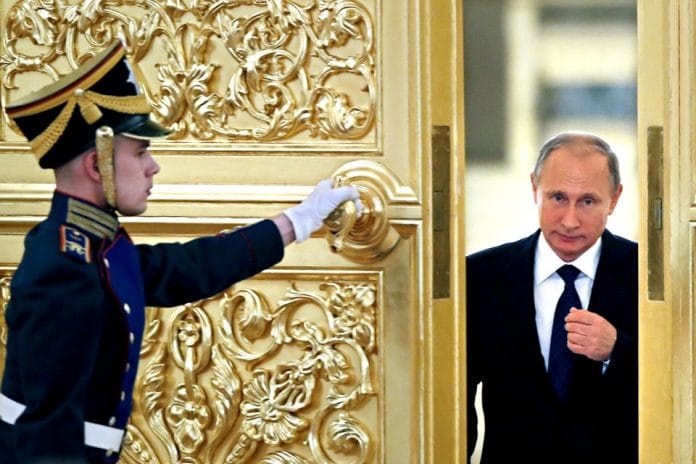 Update: Phil Butler is in an ICU in Crete, resuscitated twice already, but still checking his email…incredible. We appreciate your prayers for his deliverance. Thanks

[ Editor’s Note: Phil wraps up the year with his review of the current status of the US anti-Putin tirade, the strategy of which reminds one of the idiot that has a overhead light burnt out and who just keeps flicking the switch hoping it will come back on.

VT has always been amazed at how long US propaganda has been beating a dead horse with the “Russian threat”. Once it trotted out our US NATO forces commander General Breedlove to claim that Russia was planning to retaken all of its former eastern states in a move to “threaten the heart of Europe”.

Breedlove went even further, claiming that during the annual SE Russia military exercises, they were being used as a screen to launch an invasion of Ukraine, specifically saying it would only take three days to do so.

At the time, a large number of foreign observes were already monitoring the Russian war games, and no one reported seeing any of the necessary, huge logistic operations needed for an invasion operation.

The story died out, but not unexpectedly, as Western media passed on eating Breedlove alive for his embarrassing hoax. But VT did; and as usual, no one challenged us on any aspect of the story. There were witnesses galore.

VT is also well-versed in the intrigues of the Yeltsin period, where the US and Deep State partners were executing their offensive of taking over the Russian economy, the media, and then the government.

The usual tool was money – huge amounts of it to buy everyone and anyone who could assist.

It is Putin and his core group in the Russian security orgs who lead the counter attack to block this from happening.

The Russian reformers also sent major subversive players like Mikhail Khodorkovsy, packing, who coincidentally was a member of a certain tribe with a long history of such things. By the way, most of the Russian oligarchs became Israeli citizens, where a million-dollar donation helped speed up the paperwork. They also liked to keep their money there, safe from seizure.

That folks, is why Putin is so hated by the US oligarchs. He stole Russia back from the Western-backed oligarchs and reversed the tables. People who vote for Putin know this well. It is why he polls higher than any world leader at 80%, because he has defeated everything the Deep State crowd could throw at Russia… Jim W. Dean ]

The globalists running the show in Washington will stop at nothing to prevent Vladimir Putin from becoming Russia’s president in 2018. They cannot stop, for it they do the liberal world order will certainly wither and die.

Dmitry Peskov, Putin’s right-hand man, only a few days ago pointed out how the U.S. is trying to use sanctions to alienate Russian oligarchs against Mr. Putin.

But Russia’s top businessmen knew better than to trust Washington all along. Serious Russians never rely on Muppet Show antics.

What kind of promise can the new liberal order offer the men and women who control Russia’s vast riches, in order to deliver privatized control of those enormous riches to the likes of the Rothschilds and their American contemporaries? In all honesty, I feel ridiculous even asking such a question.

The uncompromising greed and stupidity of ousted Russian billionaires like Yukos oil’s Mikhael Khodorovsy, the underboss of Rothschild/Russia, is warning enough there’s nothing at all to be gained from betraying Russia and Putin. Now that I think about it, just what kind of idiot does it take to give up everything at the behest of vampire bankers in the west? I think I know the answer.

My dear departed Mom always used to repeat the popular phrase; “Birds of a feather, flock together,” when she caught me hanging out with morons. And I’ve come to the conclusion after studying all the eastern and western oligarchs on Earth, America has the dumbest of the dumb, and the most arrogant slash narcissistic business people.

Don’t take my word for it, read this interview with the Russian mafioso Khodorovsy from November on Chief Executive.

The magazine’s Jeff Cunningham speaks of the Yukos oil pirate as if Kodorovsy was some Titan of business strategy – a hardworking business genius that turned around a dying company. As the lead to his story on the man I call “Killer Khodorovsy”, the former Forbes publisher and wannabe technocrat describes Putin’s worst enemy thus:

“Mikhail Khodorkovsky is the former CEO of Russian oil company Yukos, a company that was seriously in debt when he took over 1997. He transformed Yukos into the country’s second-largest oil producer, and by 2003 he was the richest man in the country.”

Anyone who reads NEO knows this is a bald-faced lie. Khodorkovsky was backed by Rothschild and others to become chief privateer of Russian energy assets during the Yeltsin-era feeding frenzy.

And if we look at who stands behind Jeff Cunningham, who was technology adviser to Schroder Ventures global asset management, and one of crazy Senator John McCain’s henchmen as part of Arizona State University’s McCain Institute, a geopolitical think tank, then we find nearly all the liberal order’s evil villains.

What distinguishes Cunningham for me is his being in the upper crust of journalists, which eliminates any possibility he is simply mistaken about Khodorkovsy. Therefore, I said he’s a “bald-faced” liar. The Yukos mess is well-documented by now, so it’s time we return to our theme.

The truth of Khodorkovsky and fellow ousted oil oligarch Boris Berezovsky, is that they were backed to essentially steal Russia’s energy wealth for the globalists.

One of the reasons Vladimir Putin is vilified by corporate western media today is because he wrested back control of Russia’s energy wealth from British and American bankers. And this is the reason we see the same media and corporations backing these ousted oligarchs.

Back to the use of sanctions to “leverage” Putin out, the US introduced sanctions against Moscow in 2014 when the country re-united with Crimea and the conflict in Ukraine began.

These useless restrictions have since expanded to include individuals, companies and whole branches of the Russian economy, not to mention that they function as a myriad of petty distractions instituted by Washington.

In layman’s terms, the wild-eyed liberalist order has thrown everything at Putin, “including” the kitchen sink. And they’ve failed miserably at every turn. Instead of destroying Putin’s administration, western sanctions and other strategies have only served to strengthen his government.

In this nightmarish new America, Putin critics like military industrialist John McCain ride in a metaphorical motorcycle side car driven by Putin enemies and weirdos like Masha Gessen. Cutting the figure of “Beaker” from the Muppet Show, Gessen is an iconic symbol of just how screwed up America has become.

Hiding her anti-Russian jihad underneath the popular guise of outspoken Putin critic, Gessen leverages a pseudo-intellectual costume of a journalist who tracks the toxic legacy of the Soviet era. Reading her venomous malarkey, it makes me think Gessen is nothing more than an educated Pussy Riot singer.

She’s used a high-powered intellect and misdirected passion to foster such terms as Homo Sovieticus, in order to classify poor pitiful Ruskies too dumb and brainwashed to escape a U.S.S.R. mentality.

And it’s Putin who’s the Stalin-like or Hitler-like dictator? Sometimes I feel sorry for Putin spokesperson Dmitry Peskov for his having to deal with hordes of batshit crazy westerners. I know the morning briefing has to begin and end with vein busting laughter at the overnight news reports. Gessen or John McCain, neither one predict any future for a Putin led Russia. Meanwhile…

The pitiful figure Masha Gessen represents, stands alongside the cutthroats traitors of Russia like Khodorovsy or Berezovsky in the clear imagination. Vested interests. What’s in it for them. This is where citizens have to search out the truth. What is it that powers evil ousted oligarchs and damaged lesbian women Jews from Moscow?

For the former a progressive Russia is one made up of 40 tiny banana republics lorded over by Rothschild banks, Dutch Royal Shell, BP, and Exxon. And for Gessen types the all-new Russia should be transgender, gay, lesbian, amoral, anti-god, pro-anything goes. For these people giant mother Russia is supposed to metamorphize overnight into San Francisco.

Sometimes I think these people’s daddies were not tough enough on their kids – or either too tough. Well, I’m sorry for them. Vladimir Putin will be president again. Crying time won’t end anytime soon, so save your foolish sanctions that hurt the ordinary people too.

Maybe you should sit back and watch your Muppet Show and let Putin sort out Russia.