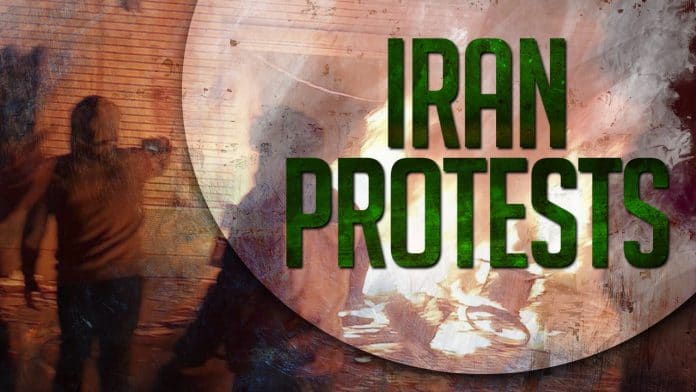 Today, the influence of the Iranian state and its set of values is growing in the Middle East and around the world.

In late December, anti-government protests sparked across the country. Over 20 people were killed, hundreds injured and thousands detained because of clashes between security forces and the protestors. The protests emerged due to internal economic factors and the activity of foreign adversaries of Iran. The main factors behind the protests were government imposed barriers to small businesses, a strict regulation of daily life by the government, corruption, high level of the social differentiation and economic variance within the population as well as the infiltration of patterns of the Western consumerist society into the country.

On December 28, protests broke out in the northern city of Mashhad. Over the next few days, these protests spread across the country and reached the Iranian capital, Teheran. In some areas, protestors attempted to storm police stations and government buildings. This became the main reason for the casualties. For example, six protesters were killed during an attack on the police station in Qahderijan. The protesters tried to steal guns from the station. According to reports, two protestors also died in the city of Khomeini Shahr, three in Shahin Shahr, six in Tuyserkan, two in Izeh and four in Doroud. A member of the Islamic Revolutionary Guards Corps was also reportedly killed by a protestor with a hunting gun near Najafabad.

According to reports, the protests were initially caused by President Hassan Rouhani’s leak of a proposed government budget last month. The budget would have slashed cash subsidies for the poor and raised fuel prices to lower debt. The plan also included fees for car registration and a departure tax. Some groups of protesters also criticized Iran’s spending on foreign policy goals across the region.

Iranian authorities have temporarily blocked access to social media and messaging apps which could allow the protestors to organize. Habibollah Khojastehpour, the deputy governor of the Lorestan province, accused “foreign agents” for the deaths of two demonstrators that took place on December 30.

“No shots were fired by the police and security forces. We have found evidence of enemies of the revolution, Takfiri groups [militant groups] and foreign agents in this clash,” he said in an interview to the state-run TV station on December 31.

Iran’s Ambassador to the UN Gholamali Khoshroo accused the US of “grotesque” interference in the country’s affairs and of encouraging regime change in Iran after the US President Donald Trump had praised the riots “against the brutal and corrupt Iranian regime” and warned that the US was closely watching the situation. US ambassador to the UN, Nikki Haley even vowed to call an “urgent” UN Security Council meeting to discuss the situation in Iran.

Previously, such major protests took place in Iran 9 years ago, in 2009. The 2018 protest follows major foreign policy successes of Iran in the Middle East. Meanwhile, the US and Israeli leadership made multiple statements that Tel Aviv and Washington are set to counter the growing Iranian influence.

According to experts, the US is actively using diplomacy and intelligence as means to further destabilize the situation in Iran. Kurds and Azeris living in Iran played an important role in escalating the protests. The US elites directly influence these communities.

At one point, Iran was close to the edge of losing control over the expanding protests. Currently, it looks like Teheran regained control of the situation. If the situation destabilizes further or if the Iranian government weakens enough, the chances for US-Israeli intervention in the country will grow. The formal reason for this aggression will be the so-called protection of “freedom and democracy”.

The recent events clearly indicate that foreign actors have and are able to use so-called soft power means to destabilize the internal situation in Iran and possibly later, within 2-3 months, in Russia.