Editorial note: Trump’s move against Jerusalem has nothing to do with a spat between controlled opposition groups and the Kosher Nostra controlled Tel Aviv regime.  Behind this is a war waged by Trump and his group of powerful friends, not just Epstein or Sater, but the phony elites that keep him in power.

Their war is on Christianity and they  are fully supported by the Luciferian inspired “evangelical” phony pole barn monstrosity churches led by coven leaders that are attended by 40 million unwitting Americans.

Jerusalem is a Christian city, by treaty open, never to be part of a Muslim or Jewish state.  Only VT has the courage to publish this.  Thus far, the prime defender of Christianity in the Middle East is the Grand Mufti of Damascus…Gordon Duff

Since the nineties it has been apparent even in secular company that persecution of Christians was rampant in some countries. Yet beyond lip service, there is no international effort to change this disastrous situation.

More Christians died for their faith in the past century alone than in the history of Christianity to that point  – chiefly at the hands of atheist regimes (mainly in the past) and Salafist militants like ISIS, al-Qaeda, Boko Haram, and others (now). The destabilization of the Middle East over the past two decades has had a devastating impact on the region’s native Christian population.
In Iraq, a population that numbered more than a million in the 1990s dwindled to less than a third of that in the wake of the US-led invasion and removal of the secular government of Saddam Hussein. In Syria, under threat since 2011 by Salafist groups armed and funded by Saudi Arabia, Qatar, Turkey and other countries – the US shamefully included – Christians seemed to be facing a similar fate. 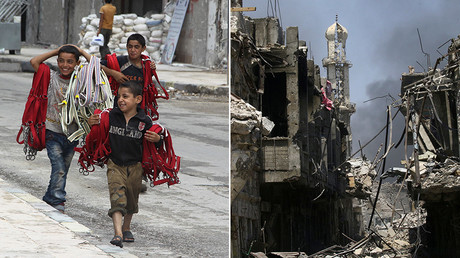 But lately there have been grounds for hope. Christmas is particularly joyful this year in Syria. Aleppo, Homs, and other cities liberated from years of oppression by jihadists had reason to celebrate – and the freedom to do so – care of the Syrian Arab Army and the Russian Air Force. Mosul in Iraq was cleared of ISIS fighters by US-led coalition. God willing, 2018 will see the freeing of other areas still under terrorist control.

Even when peace returns to Syria and Iraq, there will still be a formidable task of rebuilding. Earlier this year the US Agency for International Development made a point of announcing it would bypass United Nations agencies in order to “create high-quality, effective, and efficient partnerships” to help return members of “minorities” and “diverse religious and ethnic groups” to their homes across Iraq. Evidently, even under President Donald Trump official US government agencies are loath to explicitly refer to the faith, though commendably Vice President Mike Pence did do so when addressing a Christian conference.

The Russian government – which for years has spoken out against Christian genocide in the Middle East – has pledged its assistance in the rebuilding of Syrian churches, with the participation of the Orthodox Church and religious organizations. But why shouldn’t the governments of other countries pitch in too, not just for generic reconstruction or aid to displaced persons but specifically to help maintain Christians in the region where Christianity was born?

Apart from a few notable exceptions like Pence and Hungary’s Prime Minister Viktor Orbán, Western governments are still squeamish when talking about persecution of Christianity, which by far is the most widely persecuted religion on earth. But why? The State Department has no trouble at all saying “Muslim” when referring to, for example, Myanmar today or to Bosnia and Kosovo in the past.

For example, when speaking in support of Kosovan independence, US Congressional leaders openly spoke of promoting a “US-Muslim partnership” and lauding the fact that “the United States leads the way for the creation of a predominantly Muslim country in the very heart of Europe.”

Would the same officials ever call for a US-Christian partnership or for Washington to play midwife to the birth of a predominantly Christian state – anywhere? Of course not. 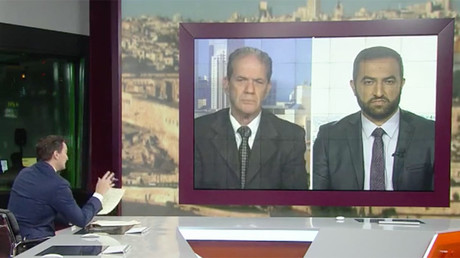 To their credit, the governments of majority Muslim countries are not at all embarrassed to stick up for members of their own faith. In particular, the Organisation of Islamic Cooperation (the OIC), a group of 57 mostly Muslim-majority countries, bills itself as “the collective voice of the Muslim world.”

Despite intra-Islamic conflicts – notably the Sunni-Shiite divide between Saudi Arabia and Iran respectively – the OIC is vocal in promoting a unified Muslim perspective on issues where there is a broad consensus.

For example, the OIC issued a strong statement denouncing US President Donald Trump’s declaration that the United States considers Jerusalem to be Israel’s capital. The OIC’s information chief also took a position on the internal affairs of traditionally Christian European countries, to the effect that mass Muslim migration is really doing Europe a big favor.

Where is the comparable Christian voice? After all, there are more majority-Christian countries (about 120) than majority-Muslim (about 50). There are approximately 2.5 billion people who identify as Christians, versus 1.8 billion Muslims.

There are about 30 countries where Christianity or a particular church has a leading status defined in law, or where a church’s preeminence is customary, like the status of Orthodoxy in Russia or Roman Catholicism in Ireland, as opposed to about 20 where Islam is legally established.

The flags of about 20 countries include specifically Islamic symbols, such the crescent moon. In contrast, about 30 national flags carry a depiction of the Christian cross, with an additional dozen or so if naval ensigns are counted, for example the Saint Andrew’s cross on the flags of the Russian and Belgian fleets, and the Saint George’s cross on the ensigns of India, Italy, South Africa, Latvia, Lithuania, Ukraine, and others whose civil flags do not display a cross.

In short, there is certainly a sufficient global “constituency” for a hypothetical Christian Counterpart for the OIC. (For the purposes of discussion, let’s call it the “Organisation of Christian Cooperation,” or the OCC.) A future OCC should not only welcome all majority Christian countries but others where Christians are numerically or socially significant.

For example, while South Korea is only about one-third Christian, Christians form a solid majority of that country’s citizens participating in organized religion. About thirty countries in sub-Saharan Africa would be obvious OCC Member State candidates, as would virtually all of Latin America. China and India, where Christian minorities outnumber the total populations of many majority-Christian countries, should be welcomed as Members or Observers.

A good place for global intergovernmental Christian cooperation to start might be with the collaboration between the world’s two biggest confessions, Roman Catholicism and Orthodoxy.

This involves not only church-to-church contacts (symbolized by the 2016 meeting in Cuba of Pope Francis and Russian Patriarch Kirill) but state-to-state activity (symbolized by meetings between Francis and Russian President Vladimir Putin in 2013 and 2015). Keep in mind that in addition to his spiritual role the Roman pontiff is the ruler of the Holy See – a sovereign, independent state with an active, worldwide diplomatic mission.

Syria and the plight of Middle Eastern Christians were very much on the agenda of the Vatican’s secretary of state, Cardinal Pietro Parolin, who in August 2017 met with both Putin and Kirill in Moscow. According to Claire Giangravè of the Roman Catholic publication, Crux, there was a lot of agreement between the two sides:

“Already in late 2013, Francis was largely responsible for helping to head off an anti-Assad Western offensive in Syria, after news broke that the government [supposedly] had used chemical weapons against its rebelling populace.

“This was not done casually by the Vatican, as Catholic voices on the ground had shown support for the Assad regime, which seems to them less dangerous than an unknown and unpredictable alternative. Putin, from his side, has been a strong critic of efforts to impose democratic [sic] states in the Middle East and views the Syrian president as the only hope for stabilization in the crucial region.”

Reports Crux from Rome: “As the leadership role of the United States in the Middle East falters, Russia has reiterated its commitment to bringing peace and stability to the region – and safeguarding its Christian communities and heritage.” If the Vatican and Russia can come to a common position on supporting Christians in the Middle East, perhaps it can point to a way for other countries also to get actively involved. Despite recent fears that Christianity was doomed to extinction in the region – most drastically in Iraq – the approaching defeat of the jihadists in Syria may be grounds for optimism.

After all, Christmas is the season of hope!

Jim Jatras is a former US diplomat (with service in the Office of Soviet Union Affairs during the Reagan administration) and was for many years a senior foreign policy adviser to the US Senate Republican leadership.