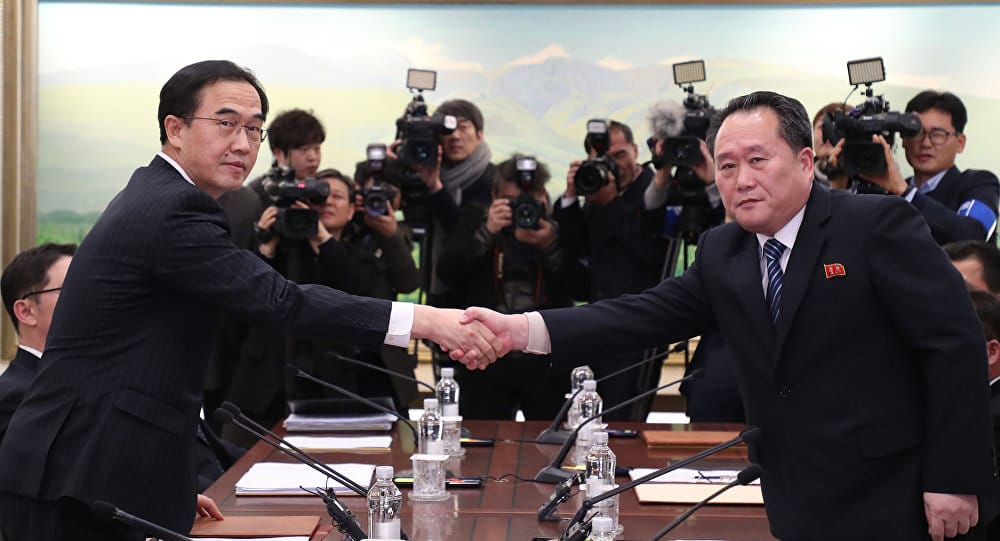 [ Editor’s Note: North and South Korea begin talks without outsiders, the best that we at VT could have hoped for, as that keeps the deal-wreckers like you know who at arm’s length. Trump has of course taken credit for the break through, something being universally laughed at in the diplomatic community.

But that is nothing new. Trump has become fairly predictable on such events. But his lie is easily debunked, as only days ago he was promoting himself as the guy to talk to, but that the big man would have to have his “conditions” met first.

It seems both North and South Korea have signaled Mr. Trump where he can stick his conditions. We salute South Korea for stepping into the driver’s seat, when it has the most to lose via the Trump insanity – the neophyte trying to bluster his way through an historically complex diplomatic challenge as if it were just another bankruptcy filing for one of his companies.

I am also not surprised that the two parties are not releasing many details, as that would allow Trump to insert himself via this Secretary of Tweeter, which by the way is also bigger than everyone else’s.

We should hear something soon about the Winter Olympics coordination, as time is short for last minute plans to be made for the North to send teams. Expect whatever comes out of these talks to be carefully choreographed around the Olympics – something you would expect with grownups in charge, which appears to be the case now.

Something like family visits would be would be one of the initial steps, as that would create a media backdrop of a lot of personal stories and take the focus of the leaders. This would show that it is easier to get things done with the leaders staying in the background, and build public pressure on them to not screw things up.

And it would not surprise me if whatever preliminary conciliation agreements are made, they will not be announced until the end of the Olympics. What a hoot it would be to see progress made without Trump, and then see him attempt to take credit for it all. I bet $5 on that… Jim W. Dean ]

Earlier, it was reported that the representatives of the Koreas had met for the first time in two years in the demilitarized zone to talk about the steps that could be taken to soothe ever-growing tensions on the peninsula and North Korea’s participation in the upcoming Olympic Games in Pyeongchang.

According to the joint statement that was issued following the talks, Seoul and Pyongyang have agreed to hold consultations to ease tensions on the border between the states. The deal was reached during a meeting in the border village of Panmunjom.

The two states have also decided to renew high-level talks to enhance bilateral cooperation in various areas, which had been frozen due to the simmering conflict over the DPRK’s nuclear program.

Moreover, according to the channel, South Korea and the DPRK have agreed to hold talks on issues related to the upcoming Olympic Games in Pyeongchang.

The development follows reports about the restoration of a military hotline between the Koreas. The North has reportedly agreed to restart the communication in order to prevent incidents in the Yellow Sea. The hotline, which was cut by Pyongyang in 2016, is expected to start working again on Wednesday.

Relations between the Koreas have deteriorated this year over Pyongyang’s continuous nuclear tests. Russia and China have supported the “Double Freeze” solution that stipulated the halt of nuclear and missile tests by the DPRK in exchange for the suspension of US-South Korean military drills.