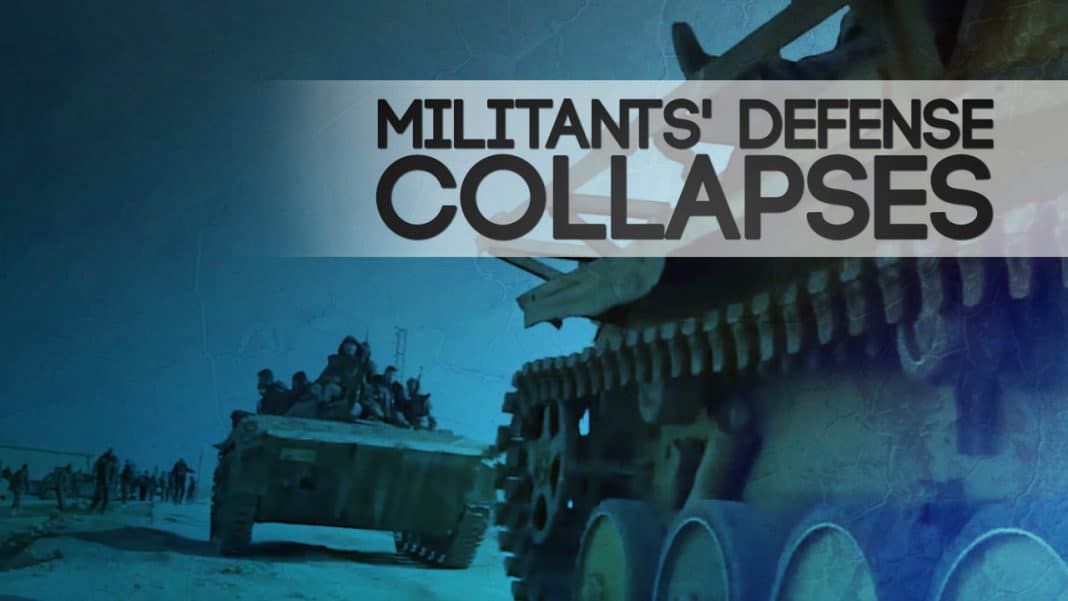 The Syrian Arab Army (SAA), the Tiger Forces and their allies have continued to advance in the Abu al-Duhur Airbase area in southern Idlib and have liberated the villages of Jakusiyah, al-Rahjan, Miraya, Tamakh, Miyal, al-Adiliyah and others from Hayat Tahrir al-Sham (formerly Jabhat al-Nusra, the Syrian branch of al-Qaeda).

According to pro-government sources, the SAA also started a bombing campaign against positions of Hayat Tahrir al-Sham in the airbase itself and the Tiger Forces even attacked militant positions in its vicinity.

Should the SAA keep the current tempo of its advance, it will reach Abu al-Duhur within the next two-three days.

The ISIS branch in Daraa province, the Khalid ibn Al-Waleed Army reportedly captured Al-Jubayliyah from its counterparts, ie from other militant groups in southern Syria.

The Syrian Air Defense Forces thwarted three Israeli missile attacks on targets near Damascus, the country’s defense ministry said in a statement on January 9. According to the statement:

The ministry added the Israeli actions were aimed at supporting militants operations in the Eastern Ghouta region near Damascus and to counter the victories achieved by the Syrian Army in Idlib province.

The US Navy’s Boeing P-8 Poseidon military aircraft was detected in the area between Russia’s Khmeimim air base and Tartus naval facility in Syria when militants attacked the facilities using 13 armed unmanned aerial vehicles (UAVs) during the night on January 6, the Russian Defense Ministry said in a statement on January 9.

“…it is a strange coincidence that during a UAV attack on the Russian military facilities in Syria, a US Poseidon reconnaissance aircraft was cruising for more than four hours over the Mediterranean Sea at an altitude of 7,000 meters,” the statement said.

Separately, the ministry revealed via its newspaper, Red Star, that the aforementioned UAVs were launched from the “Muazzara settlement located in the southwestern part of the Idlib de-escalation zone controlled by the armed forces of the so-called moderate opposition.”

The ministry has sent letters to Turkey’s Chief of General Staff Hulusi Akar and intelligence chief Hakan Fidan saying that “it is necessary for Ankara to meet assumed obligations to ensure ceasefire by controlled armed forces and intensify efforts to put observation points in the de-escalation zone in Idlib for preventing such UAV attacks on any targets.”

Earlier, Turkish Foreign Minister Mevlut Cavusoglu accused the SAA of “hitting the moderate opposition with the excuse they are fighting Nusra. [HTS]” Cavusoglu said the SAA’s actions undermined diplomatic efforts for a negotiated solution to the conflict.

It is not clear what kind of so-called moderate opposition Cavusoglu had found in the Abu al-Duhur area controlled by HTS.