[ Note: It is very rare for NEO to get an article up within 24 hours, so I suspect they considered this a timely one, which it was. The Idlib battle analysis I gave below was played out today, with the SAA forces within 3 kms of closing their first big pocket in the Idlib battle.

While I had planned to make it an entire Syrian SitRep report, I decided to tag onto it the update on the drone swarm attack on the Russian bases after we got confirmation of a US Navy recon plane in the middle of the action.

I suspect they were capturing the signals Intel on what the Russians used to take over and capture half of the drones, which puts the US as a prime suspect for being involved, creating the opportunity to grab such. This was done all the time during the Cold War.

And then China’s bringing Erik Prince in to work with them on security for the Silk Road project was a mind bender I could not leave out. I even added it into the title.

About the time we get to feeling we have seen just about everything there is to see in terms of being surprised, up comes a new one that hits you in the face. It is nice to share something with you all so timely.

Gordon and I and Kevin miss our heyday time at PressTV when we helped them build the Viewpoints commentary section into a large audience during the worst of the sanctions time, which included taking PressTV off the satellite channels.

We are booked for the 6th New Horizon conference in Tehran in early March, so we will be able to meet those folks in person. Neither of us have been there before, and if it is anything like my first trip to Syria for the 2014 elections, it will be an interesting year… JD ]

The New Year holidays are over and all eyes are turned toward wondering what 2018 will bring us. As we look back over the last several early Januaries, we could not possibly have seen the major changes that were going to come, like the Russians coming in to save Syria and the Iranians backing up Iraq with the Popular Militias so the army could focus on retaking the cities and finally Mosul.

Syria’s future is in the spotlight now as to what kind of “end to the war” are we going to see. No one really expected the war to really end in terms of life returning to normal.

We understood that the loss of ISIS’s main bases in Syria and Iraq where they could live off the population was the turning point where the ISIS dream was over.

But many escaped, and those in training camps are awaiting their deployment to whatever conflict their handlers want to use them in, be it Yemen, Africa, or back to their respective home countries as suicide bombers.

In researching for this article, I did not find much published about where will Syria be a year from now, which was a surprise. There was an Al Jazeera piece, painful to read, as it was done by one of their shill commentators approved by the Qatar sensors.

I had expected some negative spinning of the Syrian coalition’s victory despite all of its having the fight ISIS and Al Qaeda, but the US coalition, too. But the first Al Jazeera shocker I got was the fake news mention that the victory was due to “a relentless Russian bombing campaign, and the deployment of tens of thousands of Iranian-backed troops”. 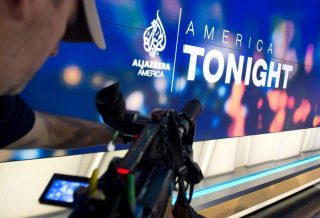 The actual Iranian numbers were much less. I would remind the young writer, Miss Tahhan, that the Syrian war was the most photographed and videoed in modern times, and our first social media war. We would have seen lots of media on these huge Iranian formations, but alas they were nowhere to be found.

Sure, Iranians were there, but they were invited as counter terrorism allies of the Syrian government, entirely the opposite of the terrorist proxies that the US coalition supported, a war crime actually.

The High Negotiation Committee (HNC) former chief negotiator, Mohammad Sabra predicted the “revolution will manifest itself in different forms if Assad is not removed from his position”.

These Saudi puppets are really not interested in the people being able to choose their leaders, but this guy had the gall to claim the struggle was “about the demands of the Syrian people” when Saudi Arabia supported ISIS all during the war. When Aleppo was retaken ISIS warehouses were found full of Saudi supplies.

Unfortunately for the failed HNC hand-puppet, the Syrian guest list for the Socchi talks has 1500 coming, a diverse cross section of Syrian society.

They will discuss a new Constitution and how to move forward with creating conditions for elections. The HNC was not invited, as they always demand as a pre-condition that everyone submit to their Saudi master wishes, as that’s what they get paid for.

The spinning in the Al Jazerra article does not end there. For geographical balance Miss Tahhan went around the world to get input from James Gelvin, professor at UCLA. He insulted the Syrian Army by claiming that most of the territorial gains made against ISIS were done by Hezbollah and Iranian units, which is quite a stretch.

True, the Sryian army had been worn down, but it had been effectively fighting a world war. When I was there as an election monitor in June of 2014, the US, Canada and Ireland contingent met with the speaker of the Parliament Mohammad al-Laham, who told us that Syria was holding POWs from 65 countries at that time.

Any lingering thought any of us might have had about the struggle being a civil war went up in smoke.

Whether the jihadis were coming from CIA training camps in the Pankisi Gorge in Georgia, Tunis, or Europe, despite all the massive post-911 travel surveillance, they had no trouble getting to Syria or Iraq. Some were even entering through Israel for deployment on the Golan front.

Syrian combat maps have been widely published over the last two years showing battle lines with not only the jihadi unit dispositions, but also those of the Syrian Units. We saw Hezbollah unit icons mixed in with the Syrian army, especially during the Homs and Deir Ezzor campaigns.

The Iranians were there, but widely disbursed. Some were static, guarding religious sites. Others were not listed on the battle maps for security reasons, but they certainly fighting as a KIA figure was released when they reached one thousand.

The US spun their sacrifice as, are you ready, “supporting terrorist in the Mid East”, one of the blackest lies that it told among many.

It was US pilots who told us how they were not allowed to bomb the endless stolen oil ISIS convoys heading to the Turkish border. It took the Russian air force to end that funding source and expose the fake US campaign.

We are looking at least a year, probably two before Damascus has full control of the country other than the Kurdish areas. The US has already floated the idea of “recognizing the Syrian Kurds”, laying the groundwork for a permanent presence there, à la Germany and South Korea, where it has no intention of leaving until it wants to.

Assad has publicly stated that his goal is to retake all occupied areas of Syria, which means we will see a showdown over the Kurdish areas eventually.

Idlib province has been a slow grind, but recent gains by the Tiger Forces indicate a major campaign to push the jihadi battle lines northward from Hama, and west from Kanisar and close a new pocket as they did twice in the Homs Province campaign.

Once that pocket is captured the Syrian forces will be able to concentrate their forces to move west to finally take control of the key M5 highway to Aleppo.

SAA advances in SW Aleppo are already progressing in what will be a three direction attack. The Turks of course will do nothing but keep supplying the Idlib jihaddis.

While the Russians have reduced their combat contingent, enough air power remains to provide the air support needed and the high end technology.

That came into play recently when the jihadis and their foreign technical backers launched a night time swarm attack of 13 drones against both their air and naval base.

A US navy recon/command and control plane was circling between the two bases which this attack was in progress. US media did not seem to find such an overt act important enough to cover.

The Russian Pansir-S ground defense system people picked up the drones early in their flight, which gave them time to deploy their electronic warfare capability to take control of those they did not shoot down, to bring them in for landing and capture. All their components can be traced now.

The Western and Gulf State proxy terror sponsors can be expected to continue to support war crimes against the Syrian people to be able to say Assad has not established control, and there will never be peace, hence he must go so they can politically Balkanize the country, stage three of their continued attack.

What we need to break up that dynamic is a long overdue UN discussion about what to do about punishing State sponsors of terrorism, including those sitting on the Security Council. We will have a Fake War on Terror as long as this scourge is deemed not polite to bring up in that body.

Veterans Today has consistently warned that this is a growing monster which will morph into various forms as a moving target, like the drone swarm attack. We are seeing an explosive growth in private military contractors, with Erik Prince currently having a proposal in to the Trump administration to create “a private, off the books CIA”.

There was no wailing and shrieking back here at home over the news, from Congress, the Democrats, veterans, religious or academic institutions about this being a subversion of the government’s duty to be accountable for its actions.

We never see the term “extrajudicial killings” used in media anymore. I was shocked to see China as a 20% partner in Erik Prince’s Hong Kong security company that is being brought in as a logistics and security consultant on the Silk Road project, as the Chinese let the fox into the chicken coop.

My message to the Chinese Politburo would be to ask them if they have lost their minds, or did the CIA figure a way to hypnotized all of them to agree to such flagrant breach of their own security, bring the “private CIA” right into the middle of the Silk Operations room. You just can’t make this stuff up.