Health Editor’s Note:  Clostridium difficile (C. diff) is a bacteria that can be found in the air, soil, water and feces of animals and humans.  This bacteria can exist in your intestines and not cause any problems, but if you do get a C. diff infection, you are in a world of trouble. You would be denied access to a new healthcare facility if you needed to move. You will have a long road ahead of you to rid your body of the C.diff bacteria.

C.diff is spread in nursing homes and hospitals where employees come in contact with it and then spread it to patients or residents. An infection from C.diff is as easy to get as touching sheets, clothing, surfaces that have come in contact with feces and then touching your mouth or nose.  Can you believe we touch our faces between 2,000 and 3,000 times a day?  We do, and this is why we can become infected with C.diff not to mention any virus, thus the reason for the spread of the common cold virus and the program encouraging frequent hand washing. C.diff in some facilities can reach epidemic proportions.

Older adults in health care facilities are at increased risk for getting C. diff. If they are taking antibiotics, that increases the risk. Antibiotics kill bacteria which the human body contains by the thousands, both healthy and bad types of bacteria. Antibiotics often kill the normal bacteria in the process of reaching the unhealthy types and this leads to an imbalance with allows for the growth of unhealthy bacteria, such as C. diff, to go unchecked.

Symptoms of C. diff are diarrhea that is often watery, cramping, strong odor to the feces, and perhaps even blood in the stool, fever, nausea, weight loss, rapid heart rate, and dehydration.  Some antibiotics are more likely cause the development of C. diff and it can take a very long time to eradicate this bacteria from the body. This type of bacterial infection has become a MAJOR issue for the health care field.

Treatment for C.diff may be the use of Metronidazole (MTZ), vancomycin (VAN),  and Rifamycins and fidaxomicin (FDX) for relapsing C.diff, Tetracycline (TET),  or Chloramphenicol (CHL) may also be used. The possibility of CDI recurrence within 8 weeks after an initial occurrence is reported to be between 10% and 20%  and further increases with every other event up to 40-65%.

When antibiotics do not blast out C.diff.,  IMT may be used. IMT (Microbiome transfer, or fecal microbiota transplantation), is a procedure in which fecal matter is collected from a tested donor, mixed with a saline or other solution, strained, and placed into the patient’s intestinal tract, by colonoscopy, endoscopy, sigmoidoscopy, or enema, to return missing natural bacteria to the intestine and cure the underlying disease. Despite a good cure rate for this type of treatment, patients and even doctors show a reluctance to use this treatment.  There is also the chance that other diseases, such as HIV could be passed by using this treatment method.

Since the choices for C. difficile treatment, using conventional antibiotics, is becoming limited, the development of alternative approaches, using plant-source remedies are being worked on. Plant extracts have been used by ancient civilizations to some degree of effectiveness and there is hope that at least one of these will prove to be helpful in treating this disease. Overuse of the antibiotics listed above can lead to the potential threat of more antibiotic resistant strains. Treatments made from plants may be the next level of treatment, but much work needs to be done to make sure these treatments will be effective and then safe.

The following article addresses an issue that may allow for the easy access that C.diff apparently has to our bodies……Carol

Trehalose, in the food supply since 2000, may play a role in the increased prevalence and toxicity of Clostridium difficile, according to a new study appearing in the journal Nature. In this 150-Second analysis, F. Perry Wilson, MD, examines the data, and speculates on the future of this common additive.

An article appearing in Nature made waves last week when it suggested that a common food additive known as trehalose might be responsible for the current Clostridium difficile epidemic.

Food additives? Infectious diarrhea? This one merits a closer look.

First a bit of background.

These are the infection rates per hospital stay for C. diff over time in the U.S. You’ll note a bit of an uptick starting around the year 2000. 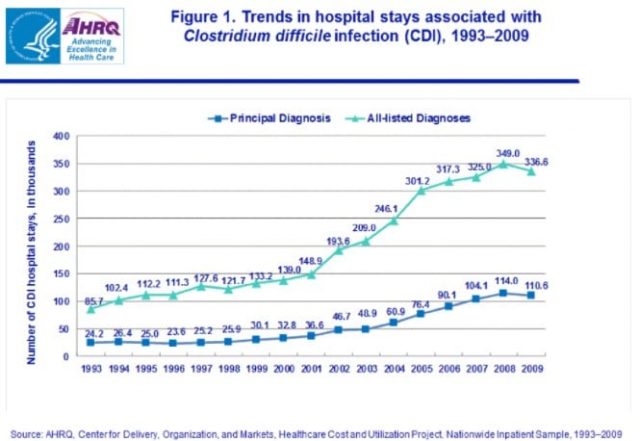 The Nature paper shows us that one thing 027 can do is a bit special – it can metabolize trehalose, a common food additive that the FDA labeled “safe” in the year 2000 – right when 027 starts to really take off.

So what is trehalose? Chemically, it’s two glucose molecules linked by a glucoside bond. 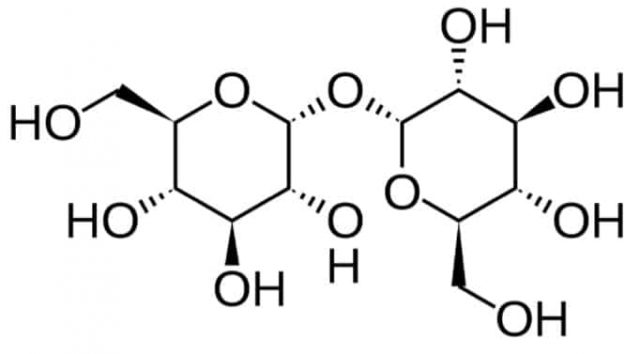 It is the primary blood sugar in flying insects like bees which is of no human interest but is fun to discuss at cocktail parties.

Trehalose is not calorie-free and it’s a bit sweet but it’s mostly a stabilizing agent used in all sorts of processed foods and products – toothpastes, ice cream, breads, hand lotion, gum.

The Nature paper shows us that two of the most virulent strains of C. diff, including 027, can metabolize even trace amounts of trehalose. They go on to show that when strains are mixed together, low concentrations of trehalose can lead to natural selection for the 027 strain – it can simply outcompete the less virulent strains by metabolizing this scarce resource. 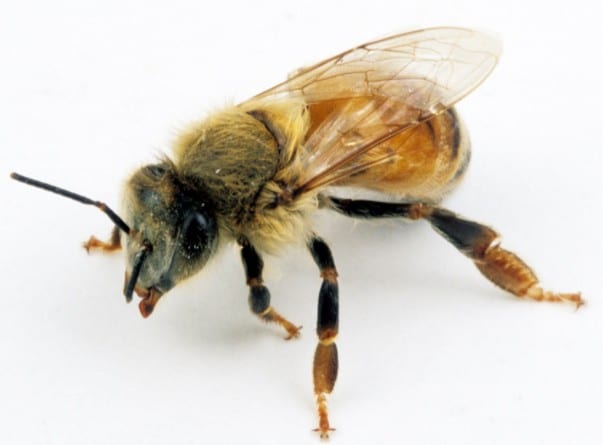 I asked lead author Dr. Robert Britton about competition with other bacteria.

He wrote: “We don’t know about competition with other bacteria but many do have the machinery to eat trehalose (and to actually make it).”

Of course, C. diff usually rises to prominence when other gut bacteria have been killed by antibiotics, meaning competition with other bacteria is limited.

The paper also suggests that the virulence of the 027 strain may be linked to trehalose directly. When infected mice were given trehalose, they were much more likely to die, as you can see from this Kaplan-Meier curve.

Now, this study is not going to lead to a cure for C. diff. If we were to eliminate dietary trehalose I have no doubt that certain strains would evolve to exploit any other energy-containing molecule we put in our bodies. And to be fair, I should mention some studies suggest that trehalose has a protective role in reducing the rate of fatty liver disease.

But this study reminds us that while we may be able to easily determine if a compound is toxic to a human cell, determining how a compound will affect the complex interplay of the human system with the thousands and millions of symbiont species within and around us, is exceedingly difficult. So eat with care.

Perry Wilson, MD, MSCE, is an assistant professor of medicine at the Yale School of Medicine. He is a MedPage Today reviewer, and in addition to his video analyses, he authors a blog, The Methods Man. You can follow @methodsmanmd on Twitter.