British pop singer Seal has lashed out at Oprah Winfrey and much of the Hollywood establishment for being too hypocritical about Harvey Weinstein and other predators in the entertainment industry. Seal tweeted of Oprah’s Golden Globes speech:

“Oh I forgot, that’s right…..you’d heard the rumours but you had no idea he was actually serially assaulting young stary-eyed actresses who in turn had no idea what they were getting into. My bad..”

During her speech, Oprah delivered a message which said in part:

“For too long, women have not been heard or believed if they dared to speak their truth to the power of those men. But their time is up. Their time is up…

“I want all the girls watching here and now to know that a new day is on the horizon! And when that new day finally dawns, it will be because of a lot of magnificent women, many of whom are right here in this room tonight, and some pretty phenomenal men, fighting hard to make sure that they become the leaders who take us to the time when nobody ever has to say “me too” again. Thank you.”[1]

Seal was obviously not impressed. Oprah, said Seal, was inevitably in cahoots with Hollywood and has been “part of the problem for decades.”[2] Why? Seal said that Oprah almost certainly knew about Weinstein’s sexual adventures with women who wanted to be famous for a season. Oprah, Seal continued to say, is part of the “sanctimonious Hollywood” that has been grabbing women, to use Donald Trump’s phraseology, “by the pussy.”

Seal could be onto something here because his former wife, Heidi Klum, used to work for Project Runaway, a company that was produced by Weinstein himself.[3] Keep also in mind that it was the Weinstein Company that produced The Butler, which featured Oprah Winfrey herself.

Acting like a marionette, Oprah responded to Seal’s damning statement by saying that “Everybody has a story and so I think this is a watershed moment. If we make this just about Harvey Weinstein, then we will have lost this moment.”[4]

One simply has to laugh over these issues because the entertainment industry and Hollywood celebrities are still trying to wiggle out of the moral equation, which always gets them into trouble.

Celebrities are slowly but surely realizing that attempting to get rid of morality (another word for practical reason) without committing intellectual or even social suicide is impossible. The moral life is not a juggernaut of propositions that has absolutely nothing to do with our normal, day-to-day life. No, the moral life is part of who we are as human beings and rational creatures.

The central problem is that Hollywood celebrities have for decades ignored, dismissed, abandoned, and even deliberately mocked and attacked moral principles in one movie after another. But when people like Weinstein touch women inappropriately, all of a sudden celebrities start coming out of the woodwork with moral pitchforks ready to slam anyone who happens to violate the moral law.

As we have pointed out in the past, whenever actresses like Kate Winslet overstep their bound and transgress the moral law in movies like The Reader, the entire Hollywood industry calls this form of sexualization of the culture “art.” To them, producing movies like Deep Throat, Basic Instinct, Eastern Promises, isn’t immoral at all. It is all about artistic expression.

What is so interesting is that people like Oprah Winfrey have never said a damn thing about this either. Now they are telling us that people like Weinstein are scums whose “time is up”? Where is the logic in that? Who are those people really kidding? Do they mean to tell us that they don’t know what hypocrisy or contradiction actually is? Perhaps they need to pick of a copy of philosopher Harry G. Frankfurt’s book.[5] 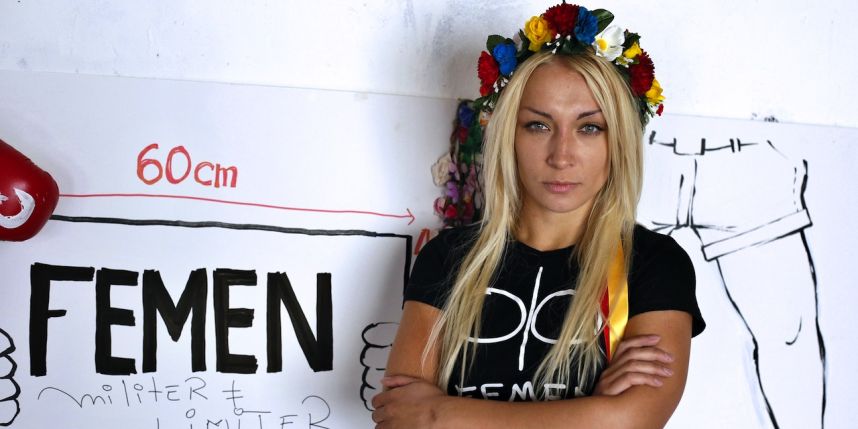 There is more to this important issue than meets the eye and dear. For example, in 2013, Inna Shevchenko, the leader of the Femen movement, was running around literally naked in much of Europe and saying things like, “We can do everything, and so Femen are kind of feminist al-Qaida, if you want. We are feminist terrorists coming and showing how it is.”[6] Shevchenko continued:

“We are feminism’s shock troops, a spearhead unit of militants, a modern incarnation of the word fearless. Our nakedness attacks the raw nerve of the historic conflict between women and ‘the system.’

“We are nothing less than its most visual and fitting embodiment. Our activists’ bodies represent undisguised hatred for the patriarchal order, and display the new aesthetics of a rejuvenated woman’s revolution.”[7]

Naked breasts, Shevchenko tells us, are “political instruments. Our breasts are talking; our breasts are screaming” for “a new meaning. This is my political weapons.” “With our political breasts,” she said elsewhere, “we are shocking, irritating, frightening, inspiring.”[11]

She once again postulated:

“We believe that if women are left with little more than satisfying sexual desires as a life purpose, then our sexuality must become politicised. We are not denying our potential to be treated as sex objects. On the contrary, we are taking our sexuality into our own hands, turning it against our enemy. We are transforming female sexual subordination into aggression, and thereby starting the real war.

“Make no mistake about it: we are at war. This is an ideological war, a war of traditionalism against modernity, oppression against freedom, dictatorship against the right to free expression. We are targeting the three principle manifestations of patriarchy: religion, the sex industry, and dictatorship.”[12]

“We must not fall into the trap of self-censorship and create restrictions for ourselves so as to avoid ‘offending someone’s beliefs.’”[13]

Listen to the logic very carefully here: Shevchenko means to tell us all that it is freedom of speech to get naked in public places and even to literally and publicly crouch down and urinate on a picture of a grimacing Viktor Yanukovich (Ukrainian president) without getting arrested,[14] but she cannot see why a predator would attempt to rape her while she is walking around naked!

Shevchenko is bad enough, but the New Work Times and other outlets have fallen into the same ideological trap. For example, back in 1971, the New York Times wrote articles celebrating the work of theoreticians and revolutionaries like Wilhelm Reich without even warning their readers what Reich actually stood for. The New York Times said of Reich then:

“IF the latex Reich of the ‘Orgone Box’ and the ‘E.P.P.O.’ is something of a tragic figure, the early Reich of ‘Mass Psychology of Fascism’ is as much a culture hero to the youth of today as he was to young people 35 years ago, when his courageous revolutionary books gave hope to the dispirited students of Western Europe oppressed by the specter of National Socialism.”[15]

What did Reich actually teach young people in books? Well, listen to him: “Sexual inhibition prevents the average adolescent from thinking and feeling in a rational way.”[16] Reich continued,

Wilhelm Reich, who was a student of Sigmund Freud, died in 1957. Yet his legacy lives on. He is a cultural phenomenon.[19] As the Guardian put it, Reich was “the man who invented free love,”[20] and people like Norman Mailer, J.D. Salinger, Saul Bellow, Paul Goodman, Allen Ginsberg, Jack Kerouac, Dwight Macdonald and William S. Burroughs have all been influenced by Reich’s “orgone.”[21] Mailer himself said of one of Reich’s books,

“What was important to me was the force, and clarity and power of [Reich’s] early works, and the daring. And also the fact that I think in a basic sense that he was right.”[22]

We should also add that Reich invented the phrase “the sexual revolution.” In his book The Sexual Revolution, Reich wrote: “The first prerequisite for healthier human and sexual relationships is the elimination of those moral concepts which base their demands on allegedly supernatural commands, on arbitrary human regulations, or simply on tradition…We do not want to see natural sexual attraction stamped as ‘sin,’ ‘sensuality’ fought as something low and beastly, and the ‘conquering of the flesh’ made the guiding principle of morality!”[23]

“In 1947, after Harper’s magazine introduced Reich to mainstream Americans as the leader of ‘a new cult of sex and anarchy’ that was blooming along the west coast, where Henry Miller and other bohemians lived in shacks along the Pacific, the Food and Drug Administration began investigating Reich for making fraudulent claims about the orgone energy accumulator.”[24]

Once again, if people are going to condemn Harvey Weinstein, who is arguably following the principles upon which the sexual revolution was based, shouldn’t they condemn people like Reich as well? If they are not prepared to do that, then what shall we say to those who are pretentiously telling us that rape is wrong?

I raised this very issue with a dear friend of mine over a month ago, and he astonishingly declared that teaching immorality in books and movies are completely different than doing perverse acts themselves! I quickly responded, “Oh, I see. Teaching adults how to rape teenagers in books is all right, but when an adult happens to act upon what they were taught is somehow wrong? I think that’s where our conversation is over.”