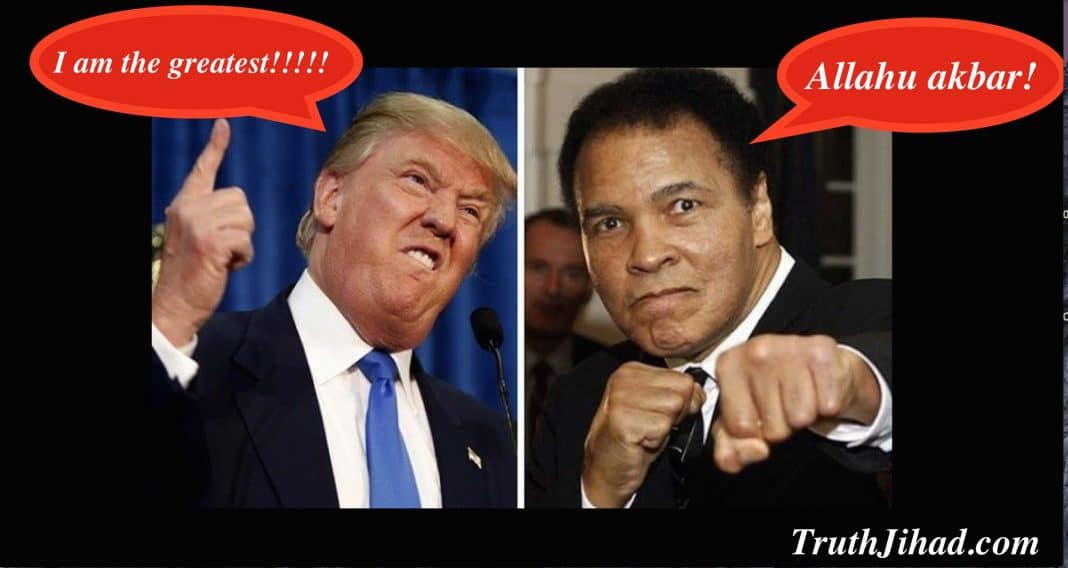 Press TV recently called to ask what I thought of Trump’s latest blatherings on the Iran nuclear deal. I am afraid my answer may have been a bit disrespectful toward our fearless leader. Here is the youtube:

Since everybody, including me, is piling on this sh*thole president who is accelerating America’s decline into a sh*thole country, it behooves me, and suits my cantankerously contrarian nature, to try to find something nice to say about him. So here goes. Note to fellow VT editors: Please don’t shoot me for this! 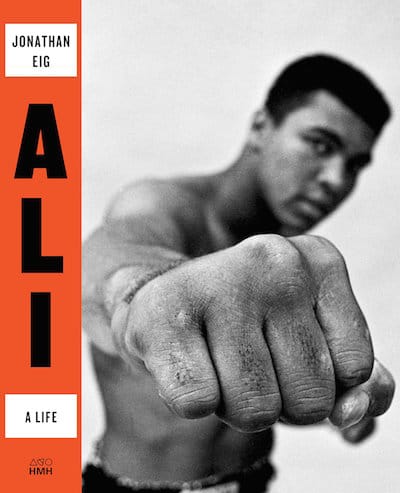 In some ways, Trump resembles my childhood hero Muhammad Ali. I have been reading Jonathan Eig’s new warts-and-all biography of “The Greatest,” and though it’s certainly no Fire and Fury hatchet-job, it paints Ali as a narcissistic egotist, serial adulterer, and…well, not exactly an “idiot” or “moron” or whatever Trumpian adjective one might use,  but let’s just say the guy was no intellectual heavyweight, much less heavyweight champ, even before his brains got battered to bits.

Ali, like Trump, sometimes exercised very bad judgment, and was capable of betraying people. Trump has bragged about screwing his friends’ wives, among other betrayals; while Ali’s worst act, the one he regretted the most, was his betrayal of his friend Malcolm X, whom he could have saved had he really tried (though it might have meant risking his neck). The big difference, of course, is that Ali experienced serious tawba (repentance) for his betrayal of Malcolm, which he considered the worst thing he had ever done. Trump seems incapable of repentance or regret or self-criticism or self-awareness of any kind.

Ali and Trump are alike in their inordinate love of money and the superficial glamor and pleasure it brings. And both have fed voraciously on attention. In this and other things, both men are paragons of vulgarity. (Of course the word “vulgar” isn’t used much any more, just as fish don’t talk much about “water”; so let’s admit that in this Trump and Ali are not unrepresentative of the American culture that produced them.)

Along with these negative traits, Trump and Ali share some positive qualities. Though neither could be termed “bright” intellectually, both epitomize an odd kind of genius that is not unrelated to charisma.  Both “think on their feet,” improvising in response to whatever is coming at them, and do it remarkably well (much of the time, anyway). Though the lines Ali would rattle off to journalists and whoever else was around rarely transcended self-aggrandizing platitudes and bad poetry, it worked. From a PR perspective, Ali was a genius. Most of his stuff may have been banal, but it was also mesmerizing. It wasn’t A+ rhetoric. It wasn’t great or even good poetry. It wasn’t lucid critique. But somehow it transcended such categories and spoke to the world in a way that far more accomplished rhetoricians, poets, and thinkers could not. Perhaps this was due to Ali’s breaking out of the roles imposed on African-Americans and just being himself, at a time when such behavior could have a huge cultural impact.

But of course the bottom line was that Ali’s courage in risking his career and freedom to resist an unjust war spoke louder than words. (Trump, for his part, is just an ordinary, selfish draft-dodger).

Trump—an icon of white nationalists just as Ali was an icon for black nationalists—has had a similarly disruptive influence on the culture. His performance in the GOP debates, in which he bobbed, weaved, and clobbered his opponents, seemingly without a plan, just improvising, breaking rules, and somehow succeeding, was not unlike Ali’s genius in the ring. Ali was weak on normal boxing fundamentals just as Trump is weak on normal political fundamentals. But both just go into the ring and make it up as they go along, and this unpredictability and rule-breaking can be an asset.

Both Ali and Trump used negative publicity brilliantly: The adage “all publicity is good publicity” doesn’t do justice to their genius. Ali learned the trick from Gorgeous George, the professional wrestler who feigned flaming homosexuality to incite audiences to pay money in hope of seeing him destroyed. That’s what got Ali (back when he was Cassius Clay) boasting about being “the prettiest”— it was a PR trick to goad white audiences into paying attention and hoping the uppity black narcissist would get his pretty face bashed in.

Trump, during the Republican primaries, proved Ali’s equal in turning negative publicity to good advantage. The more the CNN talking heads hated him, the more the ordinary schmoes paid him attention…and often ended up voting for him.

Both Ali and Trump should have quit while they were ahead. Had Ali retired before his “comeback loss” to Joe Frazier he might have gone down in history as the greatest undefeated boxer of all time. He could have become a Hollywood star, done good work for peace and Islam and race relations, and saved his brain cells.

And had Trump succeeded in losing to Crooked Hillary as planned (according to Wolff) he would now be much richer than he is, and he wouldn’t be taking it on the chin every day. Knowing when to quit might have saved him from his likely fate: Getting KO’d right out of office.

Paradoxically, I think the genius of both men is related to their marginal literacy. Ali was so dyslexic he couldn’t even spell his own middle name properly when he registered for the draft. Trump isn’t a reader either. But as Walter Ong et. al. have showed, non-literate people have certain cognitive advantages. They perceive the world more fully, and can “make it up as they go along” in real time, with flair and creativity, whether in the boxing ring or in spoken communication.  Non-literate people also have a tendency to be (verbally) combative, and can more than hold their own in “the dozens” and similar insult contests. Think of Ali’s incessant putdowns of his boxing opponents, or Trump’s incessant putdowns of his business and political opponents. We can laugh at guys like that for being illiterate; but they are laughing at us all the way to the bank, because their skills in oral verbal combat can be far more remunerative than our intellectual skills will ever be.

So let’s give them their due. Ali was a heck of a pugilist and culture warrior. Trump too is a heck of a political pugilist, and he is having some success in battering American culture into submission. (Some would say into a coma of terminally vapid mindlessness, soullessness, and heartlessness.)

But as much as I try to admire Trump the way I once admired Ali and to some extent still do, I just can’t do it.  As narcissistic and egomaniacal as he usually was, at the end of the day Ali lived his life for something bigger than himself. He sacrificed for the Good; he sacrificed for God.

Trump, like Ali, thinks he is “the greatest” and “the prettiest.” The difference is that Ali was right.