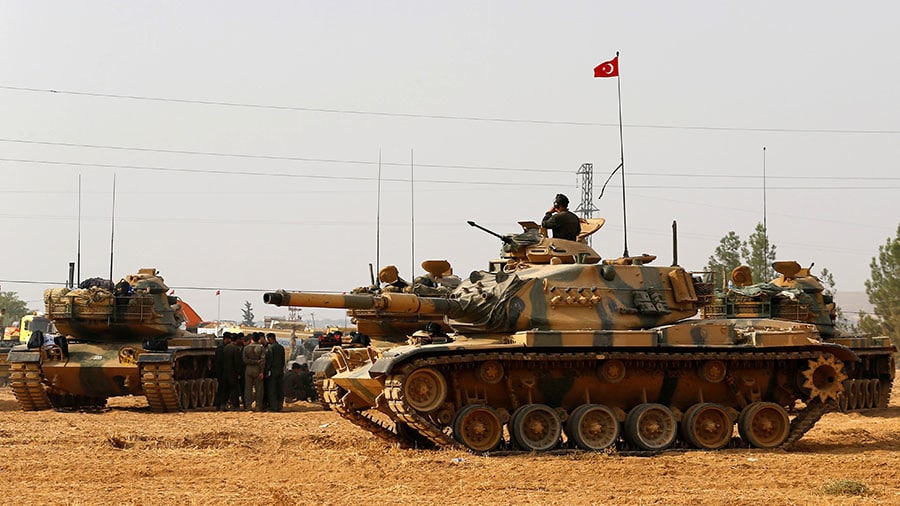 [ Editor’s Note: Erdogan ups this threats today about pre-emptive action. This might be more dangerous for him than for the US. After all of these threats, if he does nothing, he will be viewed as a bag of hot air, something he already has a profile for, playing to domestic consumption.

The US acts like it does not care as it believes he will do nothing, and with good reason. All Turkish military action in Syria has been very low key, avoiding combat. The one time where his units were counter-attacked and lost some armor, his incursion into Syria ground to a halt.

Artillery shelling began the tool of choice, but the Turkish military kept its armor vehicles out of the range of TOWs. This shows a military fearful of incurring major combat causalities, what we historically refer to as a “pay-check” military.

US advisers go with SDF units, so any engagement by the Turks, say with artillery, would risk killing US troops. If such an act were retaliated by US airstikes, even on Turkish artillery units inside Turkey, where would that put Erdogan in the eyes of his people?

Is he going to start flying air cover over his own troops? How would that look? Would Erdogan take the risk of looking powerless up against US air power? Would he kick the US out of the NATO base in Turkey? Would he allow the nuclear bombs to be removed.

Would he open up this can of worms if the SDF border force were just patrolling, as a front for getting built up, trained and armed by the US, really for use against the Syrian Army?

Would Erdogan care if the Syrians and SDF got into a shooting war? I think he would buy box seats to the event and cheer on both sides while enjoying his popcorn.

What he is doing is pushing forces into position to begin an attack on Afrin, which he has threatened. But to avoid Turkish casualties it seems he will use his usual refugee camp mercenaries dressed up as FSA units, a popular costumes for US proxies in the Al Tanaf front.

Turks will shell the city from a safe range, a form of combat they prefer. This is some 20mm action above. These units will pull back before dawn, and send the FSA cannon fodder in to do the real work.

This is a dead giveaway that the Turkish Army would break and run when getting a bloody nose. This type of “fighting” make them terrified of real combat … Jim W. Dean ]

The Turkish president has called US-backed Syrian Border Force using Kurdish fighters a “terrorist army,” vowing to “drown” it before it’s complete. He also added that military preparations against Kurdish-held Afrin are ready.

“Our duty is to drown this terrorist force before it is born,” the Turkish leader said on Monday, as cited by AP.

The 30,000-strong army of “traitors” that Washington seeks to create will point their guns against US troops at the first threat, Erdogan warned.

On Sunday, the US-led coalition announced it is helping to create a new Border Security Force to fight terrorists in Syria. The unit, stationed along the Syrian border with Iraq and Turkey, as well as along the Euphrates River Valley, is expected to be comprised of up to 30,000 people. Syrian Democratic Forces (SDF) veterans will make half of the unit, while the other half are yet to be recruited.

Washington’s role in establishing the force was branded “unacceptable” by Turkey on Sunday. A key point of discontent here is that Ankara considers the battle-hardened part of the US-backed SDF – Kurdish YPG units – to be linked to the “terrorist” Kurdistan Workers’ Party (PKK).

Military aid for the Kurds, including arms supplies, has repeatedly caused harsh criticism from Turkey, which is one of Washington’s key NATO allies.

“This is what we have to say to all our allies: don’t get between us and terrorist organizations, or we will not be responsible for the unwanted consequences,” Erdogan said, as cited by Turkish media. He added that Turkish forces will battle “until not a single terrorist remains along our borders, let alone 30,000 of them.”

Turkish troops are already deployed in Syria, as Ankara provides security across the fourth Syrian de-escalation zone in Idlib province. Despite the fact that military goals in the area have already been achieved, Erdogan vowed to launch an operation against the Kurdish-held Syrian region of Afrin in northwestern Syria. On Monday, the Turkish president reiterated the threat, saying that the operation could be imminent.

Meanwhile Turkish Prime Minister Bekir Bozdag accused the US of supporting terrorists instead of fighting them, saying it is “playing with fire” with the decision to create the security force.