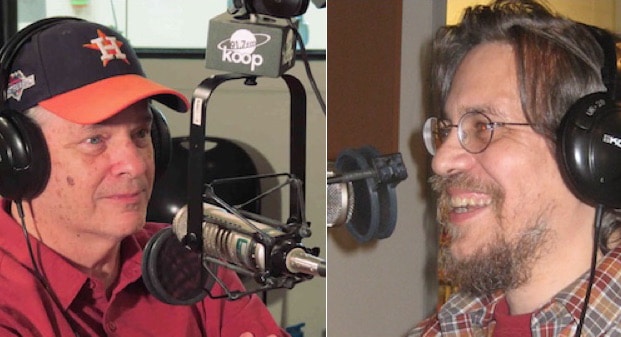 Of course we look at Donald Trump (who could miss him!) and the Bannon contretemps. Other topics include Michael Wolff’s blockbuster book on Donald Trump, the reactions to it, and its likely effect on Trump’s future. And we look at Trump in the context of Stephen Skowronek’s book on the presidency. We talk about such things as Trump’s foreign policy, Iran, the Russia investigation, the politics behind the failures of the Hurricane Harvey recovery, and how politics in 2018 is shaping up — nationally and in Texas.

And, of course, the relative size of Trump’s button!

Noted Democratic strategist and Rag Radio political analyst Glenn Smith, the director of Progress Texas PAC, is an op-ed columnist for the Austin American-Statesman, a columnist for The Quorum Report, and a former political reporter for the Houston Chronicle and Houston Post. And Smith managed Ann Richards’ winning 1990 Texas gubernatorial campaign.

Roy Casagranda is Professor of Government at Austin Community College where he teaches U.S. and Texas politics. His areas of research include Middle East history and politics, U.S. foreign policy, political philosophy, and warfare. Casagranda serves as an analyst on Middle East Political Affairs for the Austin ABC affiliate, KVUE.

Glenn Smith has shared his astute analysis of the political scene many times on Rag Radio. This is Roy Casagranda’s fourth visit; previously he discussed politics and the Middle East with us.